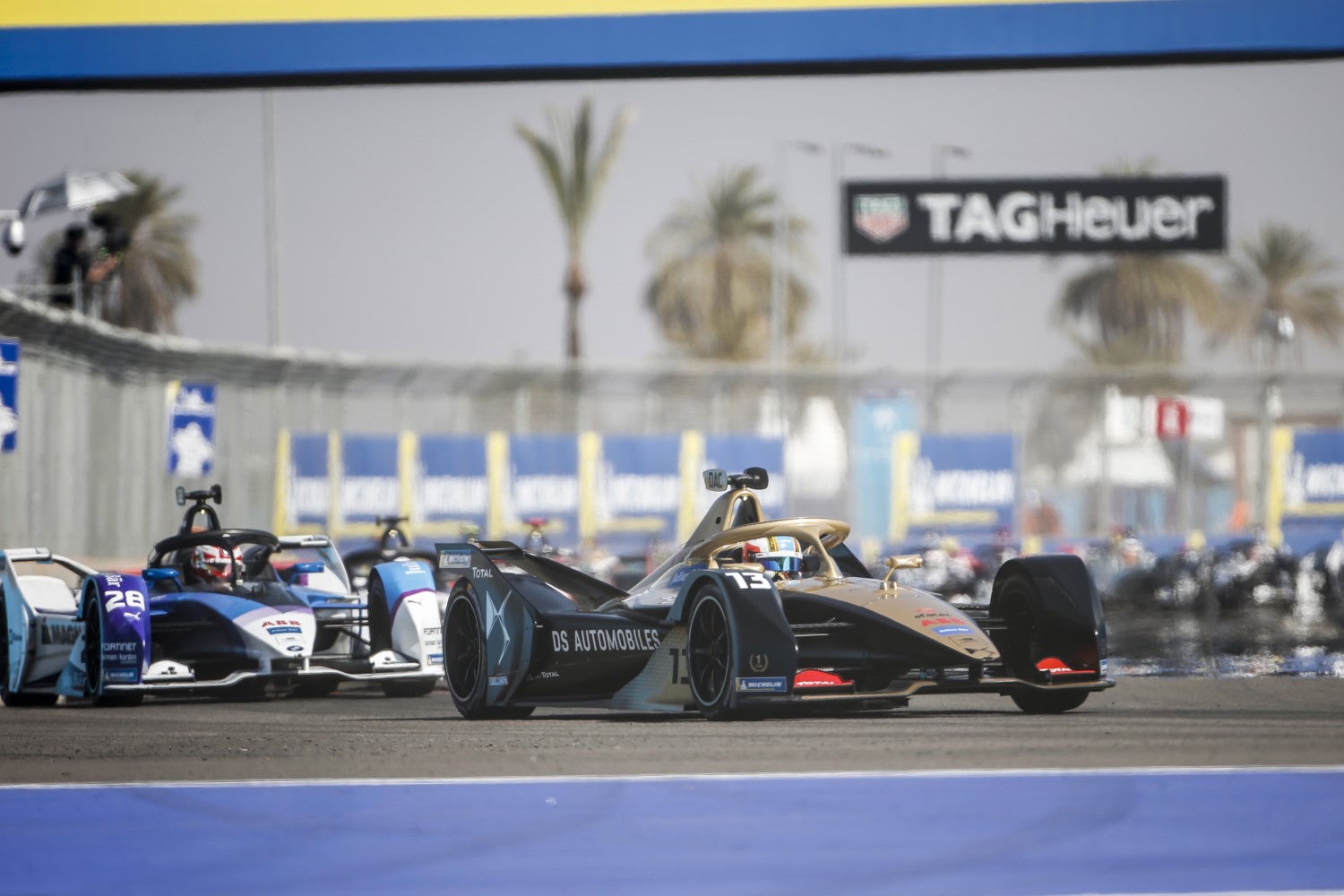 Poleman and DS Techeetah driver Antonio Felix da Costa led the way into the 2020 Marrakesh E-Prix, followed closely by the man who replaced him at BMW i Andretti Motorsport Max Guenther in second and Mercedes-Benz EQ's Nyck de Vries in third.

Starting from 11th, reigning champion and DS Techeetah driver Jean-Eric Vergne moved up the order to seventh, desperate to kick start his third championship title campaign. At the same time, Mercedes' Nyck de Vries dropped from third to the back while serving a drive-through penalty for being overpowered while regenerating energy.

Moving into third, TAG Heuer Porsche's Andre Lotterer moved up into third with 28 minutes left on the clock. With Da Costa still leading the way, Guenther followed close behind in second.

[adinserter name="GOOGLE AD"]Still climbing up the order, Vergne moved into third, slipping past his former teammate Andre Lotterer who moved down into fourth. Despite missing the first Practice session, the reigning champion was in a potentially facing a podium finish after starting outside the top ten.

Battling hard for the lead, BMW's Max Guenther and da Costa once again found themselves engaged in close-combat, wheel-to-wheel racing. Reminiscent of the race in Santiago only a few weeks before, the pair went side by side through the turn 11.

With 19 minutes remaining, Guenther slipped into the lead before da Costa went through the ATTACK MODE activation zone, reclaiming his lead with the added 35kW.

Further down the order, Rokit Venturi Racing's Edoardo Mortara and Porsche's Andre Lotterer battled for fourth and fifth, both in ATTACK MODE.

Still climbing his way up the order, Vergne (in third) went for Guenther (in second), taking the German driver on the inside of Turn 1 and moving into second behind his teammate da Costa with six minutes and one lap left of the race. Gunther, now down in third sat ahead of Lotterer in fourth, while the two German drivers jostled for a place on the podium.

Despite starting from the back of the grid, Panasonic Jaguar Racing driver and championship leader Mitch Evans had managed to climb 18 places by the final moments of the race. The Kiwi driver failed to set a time in Qualifying but more than made up for the rough start with a sensational, clean drive through the pack.

With the two DS Techeetah's up front, Vergne fended off a number of attacks from Guenther in third, costing him precious energy, before letting the BMW driver past. Still well ahead, da Costa took the checkered flag, claiming DS Techeetah's debut win in the 2019/20 season. Despite being depleted of all energy, Guenther made it over the line in second with Vergne close on his tail in third.

"The win today was down to the team. They gave me an amazing car and we are working together to improve. The race was actually much harder than it looked. I had to be very brave and clever when making any moves. At one point, I had to let Max get really close and push him into using extra energy, while with the second ATTACK MODE I was preventing Andre from getting within touching distance. In the end it worked out perfectly! We planned the race very well and all the work back in Paris paid off. Hats off to JEV today who, despite having a tough week, pulled through with a podium finish for the team."

BMW I ANDRETTI MOTORSPORT
MAXIMILIAN GUENTHER
"Fighting against both DS TECHEETAH cars today was intense. We managed the race quite well and it got very exciting when JEV overtook me towards the end. We knew we could eventually make a move, as I had an energy advantage over him. But he was defending hard, which was fair play. I think that what JEV did today is impressive. I had more energy compared to him and this made the difference in the final few corners. Also, Antonio was clever in keeping the lead, so congratulations to him!"

DS TECHEETAH
JEAN-ERIC VERGNE
"It was the hardest race of my entire career here at Formula E. Despite not being able to take part in practice yesterday, I had been watching everyone from hospital. I was still not feeling well today, but the team did an excellent job. During the race I just put my head down and gave it my all. When my engineer told me midway through the race that I was in fourth, I could not believe it. I had a good fight with Max near the end… but I was sure he was going to overtake me eventually. I tried to defend second place as much as I could, however I did not have the energy left in the car. I am pleased to be back on the podium."