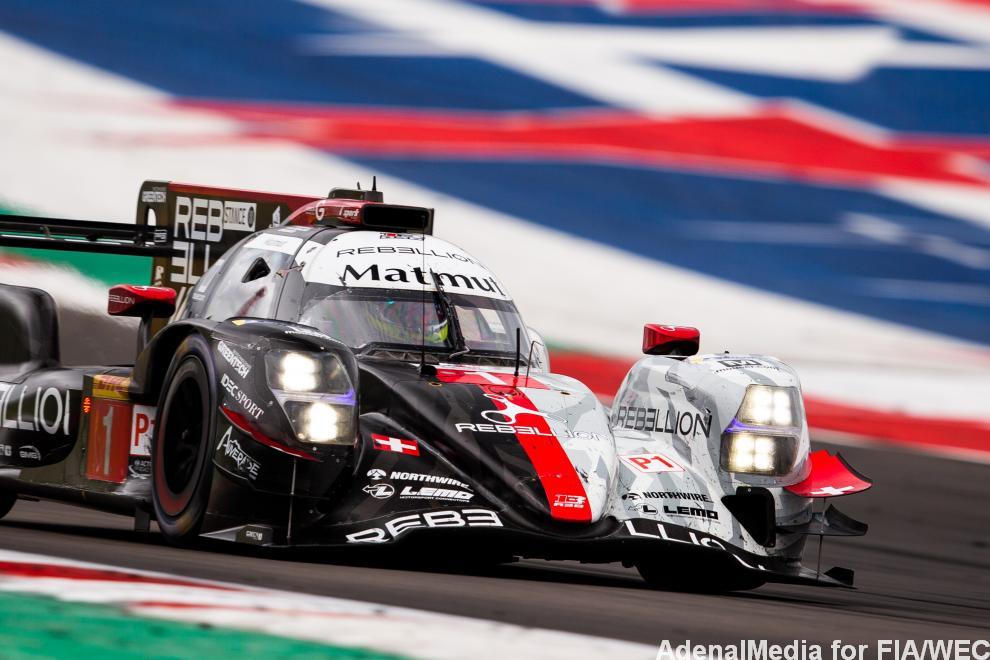 The Rebellion R13 Gibson car which was driven by Gustavo Menezes, Norman Nato and Bruno Senna led the 6-hour race from start to finish. Toyota Gazoo Racing’s No. 8 and No. 7 Toyota TS050 Hybrid cars finished second and third respectively.

In LMGTE Pro, the No. 95 Aston Martin Racing car took a lights-to-flag victory as Nicki Thiim and Marco Sorensen both produced a flawless drive at the wheel of the Aston Martin Vantage AMR.

Meanwhile, the No. 22 United Autosports entry took the overall LMP2 victory in the ORECA 07 driven by Filipe Albuquerque, Phil Hanson and Paul Di Resta. It is the second victory in a row for the British-based team.

TF Sport took its third win of the season in LMGTE Am as the No. 90 car driven by Charlie Eastwood, Jonny Adam and Salih Yoluc crossed the finish line first in their Aston Martin Vantage AMR.

The race began under grey skies and with a strong wind, with Jose lining the #7 up in second at the rolling start, one place ahead of Sebastien's in the #8, although the pair swapped positions on the opening lap as the effect of the different success handicaps became instantly apparent.

[adinserter name="GOOGLE AD"]Sebastien's pushed hard to stay within striking distance of the Rebellion #1, which made a fast start from pole position and soon established a cushion at the front. When Sebastien's pitted to hand over to Brendon the 90-minute mark, the second-placed #8 was around half a minute adrift. Jose, a further 40secs behind in third, brought the #7 into the pits soon after for Mike’s stint.

A strong opening stint from Brendon stabilized the gap to the leader and quick work in the pits reduced the deficit to around 20secs, keeping the pressure on. After a fuel stop, Brendon, who has previously won three times in Austin, continued to set impressive lap times to keep alive the #8 car’s challenge.

Soon after half distance, the next round of driver changes saw Kazuki take over the #8 and continue the pursuit while Kamui took the wheel of the third-placed #7 as the pattern of the race continued largely as before.

With a substantial success handicap to overcome, the #8 TS050 HYBRID had little opportunity to close the gap but Kazuki pushed to minimize the time loss prior to Brendon’s final 75-minute stint. Now a lap down, Kamui handed over the #7 to Jose for the run to the flag shortly after.

Brendon took the checkered flag in second place to equal TOYOTA’s best result at the Circuit of the Americas, with Jose completing the podium in the #7, two laps adrift.

The two TS050 HYBRIDs will stay in the US prior to the next round of the season, the 1000 Miles of Sebring in Florida on 20 March, the final flyaway race before WEC returns to Europe for the historic races at Spa and Le Mans.

Thiim was able to establish a buffer in the opening stint, and resisted a late charge from the #92 Porsche of Michael Christensen and Kevin Estre, which finished only 4s in arrears.

Corvette Racing ran another trouble-free event in the second race for the new Chevrolet Corvette C8.R on Sunday with a sixth-place class finish in the FIA World Endurance Championship’s Six Hours of COTA at Circuit of The Americas.

Jan Magnussen and Mike Rockenfeller, each making their first starts in the mid-engine No. 63 Mobil 1/SiriusXM Corvette C8.R, completed 170 laps for 570 miles in the highly competitive GTE Pro category. Despite lacking the same outright performance as the other manufacturer teams in the class, the Corvette Racing program still went away from the weekend with a significant amount of data and notes that will be applied to the C8.R ahead of its next event at Sebring International Raceway in March.

Sunday’s run was in addition to a successful debut for the Corvette C8.R in the Rolex 24 At Daytona where the No. 3 Corvette completed more laps and miles than any previous Corvette in race history.

On Sunday, Magnussen drove the first two stints in the car and was able to overtake two cars in his opening run. He drove more than an hour in each of his stints before handing over to Rockenfeller, making his first appearance at the COTA circuit. He drove the middle three stints before Magnussen closed the race with the final run in the Corvette.

Neither driver made a mistake on track, and the Corvette Racing pit work turned in its usual exemplary performance. That provided program engineers ample data to study with the aim of contending for victory at upcoming races in both the FIA World Endurance Championship and the IMSA WeatherTech SportsCar Championship. Fuel usage, engine and tire performance, and chassis settings were among the many areas where the team will further study and dissect data.