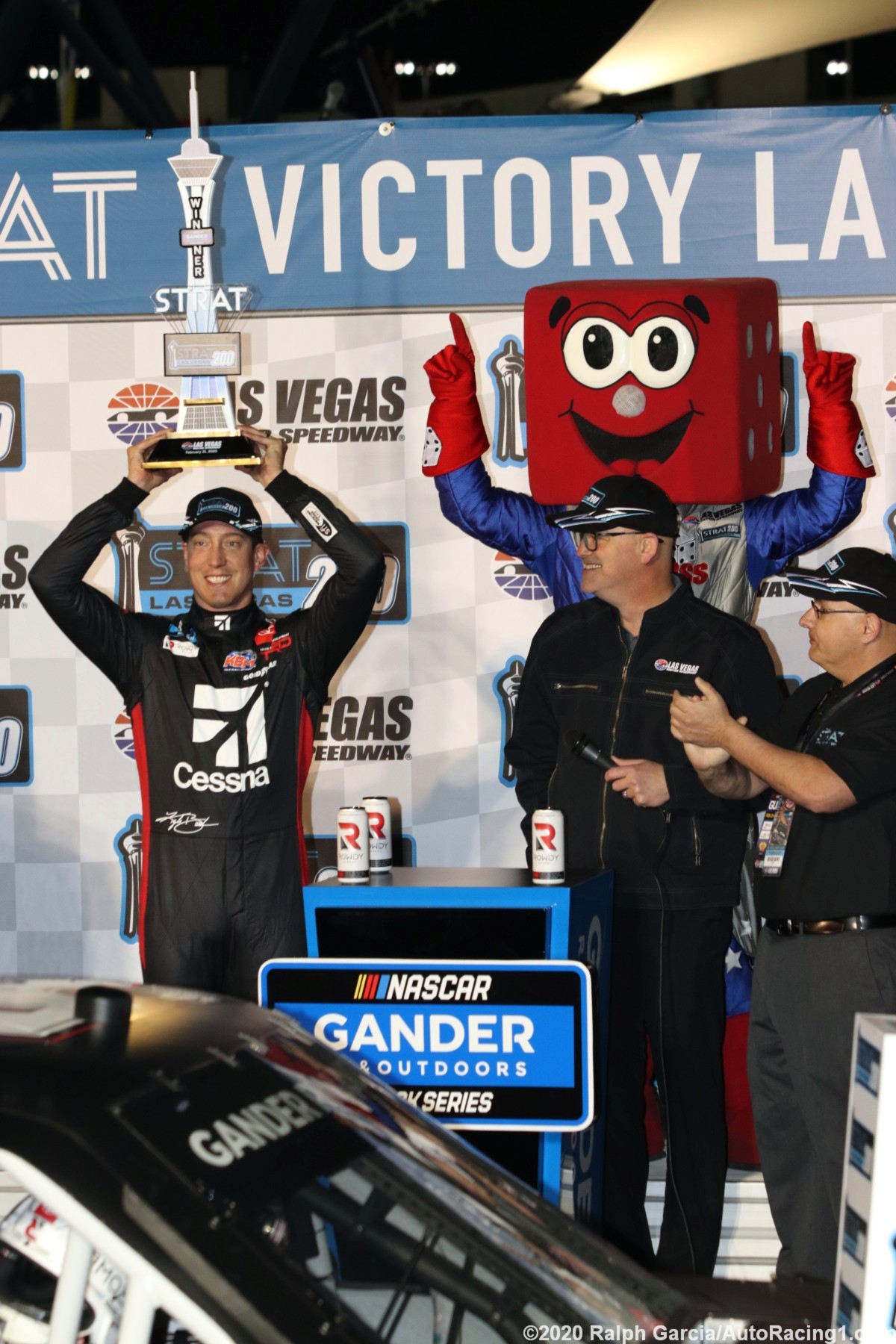 When Kyle Busch runs a truck race he usually wins and Friday night in Las Vegas was no different.

Put Busch in one of his own Kyle Busch Motorsports trucks, and he’s all but certain to win. That’s been the case for seven straight starts in the NASCAR Gander RV & Outdoors Truck Series, counting Friday night’s victory in the Strat 200 at Las Vegas Motor Speedway, his home track.

Busch led seven times for 108 of the 134 laps in the 200-mile race. About the only difficulty he had was clearing Sheldon Creed on consecutive restarts in the final stage of the race. But five laps into a run, Busch was gone.

Busch started his seven-race streak in 2018 at Pocono. He won all five of his Gander Trucks starts last year and started 2020 with the hometown victory.

After the last restart on Lap 96, Busch pulled out to a lead of more than 7.8 seconds over polesitter and race runner-up Johnny Sauter. His winning margin over Sauter was 5.958 seconds. The victory was Busch’s 57th, extending his own record in the series, and his second straight at LVMS.

“I don’t know why but we just couldn’t fire off on the restarts," Busch said. “We just didn’t have any speed. Once we got about 10 laps in, we started to check away from everybody. This Tundra was awesome — it really had great long-run speed.

“It was the first win for (crew chief) Danny Stockman at KBM, and it’s cool to have him on board. My guys worked their butts off. We unloaded and we really weren’t that close. We worked on it a lot with this new tire, and we got it a lot better.

“We kind of showed that with the (last) long run."

Creed challenged Busch after the final restart, running side-by-side with the race winner and leading Laps 96 and 97, But Creed got loose under Busch’s No. 51 Toyota on Lap 98, surrendered the top spot and fell to 10th at the finish.

“We were way too loose at the start there," Sauter said of his initial run from the pole. Adjustments during the first two pit stops helped matters, but not enough to gain equal footing with Busch.

Last week’s Daytona winner, Grant Enfinger, fell out early after Raphael Lessard’s Toyota broke loose in the bottom lane and carried both trucks into the outside wall. Lessard and Enfinger finished 30th and 31st, respectively.

What happened on the restarts?

“I don’t know why we just couldn’t fire off on the restarts. We just didn’t have any speed. Once we got about 10 laps in, we started to check away from everybody. This Cessna Tundra was awesome. It had really good long run speed. The guys did a fantastic job. It’s the first win for Danny Stockman with KBM (Kyle Busch Motorsports), so that’s cool to have him on board. For us to have good stuff with Rowdy manufacturing. All my guys, they just worked their butts off. When we unloaded we weren’t really that close. Worked on it a lot with this tire and we got it a lot better. Kind of showed that with the long run. Overall, thanks to Toyota, TRD, Rowdy Energy keeping us powered here lately, Black Clover, Gander RV & Outdoors, appreciate their support of the series and being here with us. Of course all the fans – pretty cool to have a homecoming win in Vegas like this."

What was it like battling for position early in the race?

“The restarts were crazy. We just couldn’t fire, couldn’t take off the last couple. That was not what I wanted to have in store for us. You can kind of get yourself in a bad spot sometimes in those situations. This Cessna Tundra was awesome tonight. Rowdy nation out here in Las Vegas, there’s nothing like having a homecoming and being able to win out here. I have to give a shout out to Big Machine Vodka, too I appreciate their support the last couple years. It’s fun, you know anytime you can win, it’s great. Anytime you can win in your own stuff with all these KBM (Kyle Busch Motorsports) boys, it means a lot. It’s cool to give (Danny) Stockman his first win."

Does winning the Truck races seem as easy to you as the numbers show with your laps led?

“We certainly work really, really hard. It wasn’t like we unloaded and knew we had a great piece and that we were going to go out there and dominate like that. We work for it, these guys do. All the preparation at the shop comes a long way with Danny (Stockman, crew chief), with Rudy (Fugle, No. 18 crew chief), with Mike Hillman Jr. (No. 4 crew chief). It’s just been really cool to get the equipment going that we have now. Obviously the talent that we have now. Our groups of guys, the core of them have been together now for a long time. It’s nice to keep some familiarity around KBM (Kyle Busch Motorsports) with the faces that are there and bring in some experience to help facilitate growing the 51 team too a top notch team."

“I think it goes both ways. We have some awesome talent coming in the 51 this year with Chandler (Smith). Hopefully these two will put on a good show."

Did you feel any issues with the tire used tonight?

“There was obviously some wear. We ran a tire similar to this last year in Cup Series, so I kind of knew we would have some issues like this. I think our truck turned well enough to where it didn’t wear the left front tire out that a lot of people experienced. We did not have any issues."

How does it feel to get your first win with KBM?

“I told Kyle (Busch), ‘I was like zero to hero in a week or a couple months.’ It’s awesome to have this opportunity. Being a crew chief it’s about having high enough stock, right. There’s a lot of people who would like to have my job and you just have to fight hard every day. The opprotunity that Kyle has given me, we’re going to make the most of it. Crew chiefs don’t make drivers, drivers make crew chiefs. It’s going to be pretty fun.