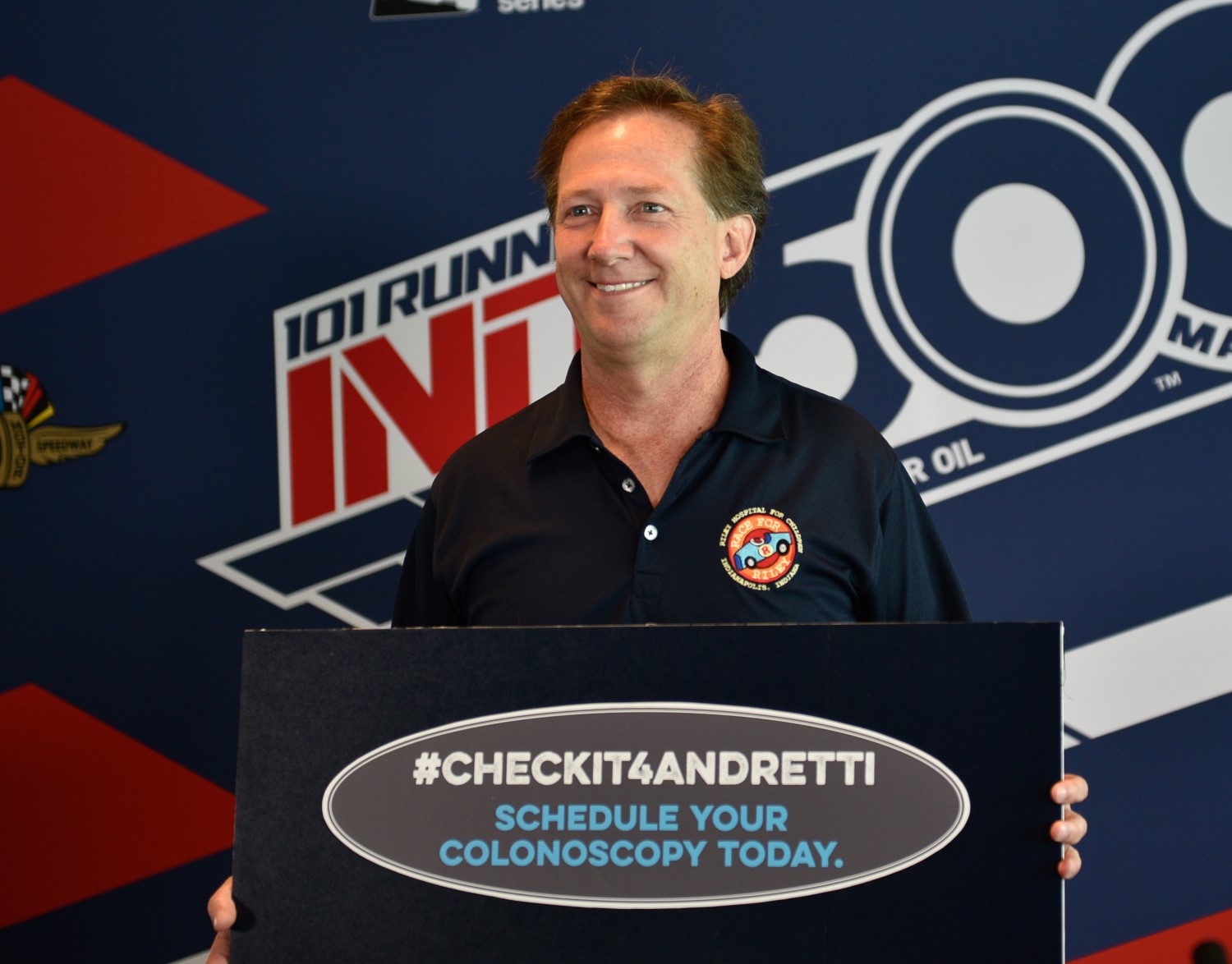 John Andretti, one of the most popular and versatile American race drivers of his generation, died Thursday, Jan. 30 after a long, courageous battle with colon cancer. He was 56.

Andretti, a member of the famed Andretti racing family, drove and won at the highest levels of North American motorsports in Indy cars, stock cars and sports cars. He also competed in top-level drag racing and short-track open-wheel racing. His career included 12 starts in the Indianapolis 500 and 11 starts in the Brickyard 400 at the Indianapolis Motor Speedway.

But his tireless, selfless work on behalf of various charities, even after his cancer diagnosis became public in April 2017, earned him even more respect and loyalty from a legion of worldwide admirers than his significant talent behind the wheel.

Andretti was born in Bethlehem, Pennsylvania, the son of race driver Aldo Andretti and nephew of 1969 Indianapolis 500 and two-time Formula One World Champion Mario Andretti.

[adinserter name="GOOGLE AD"]John Andretti started his racing career in karting and won the USAC Speedrome Regional Midget series title in 1983, at age 20. He began his professional full-time driving career after graduating from Moravian College in his hometown in 1985.

That success helped launch Andretti into INDYCAR competition with Curb Racing in 1987, joining his uncle, Mario, and cousin Michael. He was named series Rookie of the Year in 1987.

John Andretti made his Indianapolis 500 debut in 1988 with Curb Racing. He ran as high as seventh in the No. 98 Skoal Bandit Lola Cosworth before engine problems relegated him to a 21st-place finish.

He still competed in sports cars while making a name for himself early in his INDYCAR career.

Andretti teamed with sports car legends Bob Wollek and Derek Bell to win the 1989 Rolex 24 At Daytona in one of the mighty Porsche 962 prototypes of the era. Andretti and Wollek also co-drove to victory later that season at Palm Beach, Florida, in the same Porsche, and Andretti ended up fifth in the IMSA standings that season as the highest-ranked Porsche driver.

Andretti's best year of INDYCAR competition arguably came in 1991 while driving for Hall VDS Racing. He earned his sole career INDYCAR victory, at Surfers Paradise in Australia, and finished an Indy 500 career-best fifth in the No. 4 Pennzoil Z-7 Lola/Chevrolet.

The 1991 edition of "The Greatest Spectacle in Racing" marked the first of two consecutive years in which four members of the Andretti family – Mario, Michael, John and cousin Jeff — raced in the "500."

A week after John Andretti's career-best finish at Indy in 1991 also saw another highlight, when Michael, John and Mario Andretti finished 1-2-3 in the INDYCAR race at the Milwaukee Mile.

John Andretti made waves in NHRA Drag Racing in 1993 by reaching the Top Fuel semifinals in his first national event, the Southern Nationals at Atlanta. He clocked a career-best speed of 299 mph in that race.

Then Andretti shifted his focus to NASCAR in a partial schedule in the Cup Series in 1993, going full time with Hagan Racing in 1994 and driving the final third of the season in the famous Petty blue-and-red No. 43 STP Pontiac for Richard Petty Enterprises.

In May 1994, Andretti made North American racing history by becoming the first driver to attempt and complete "The Double" of racing in the Indianapolis 500 and NASCAR Coca-Cola 600 at Charlotte Motor Speedway on the same day. He finished 10th at Indy and 36th at Charlotte.

Andretti earned his first Cup Series victory in July 1997 at Daytona while driving for Cale Yarborough Motorsports, but Andretti's NASCAR career reached its peak when he returned to Petty's team full time in 1998. That started a stint of nearly five seasons between two of the most famous names in American racing.

He finished 11th in the standings in 1998 during his first season with Petty and earned his second and final Cup Series victory with team in spring 1999 at Martinsville Speedway.

Andretti teamed with another famous member of the Petty family – Richard's son, Kyle Petty – to win the GT class in Porsche GT3R at a GRAND-AM sports car race in August 2001 at Watkins Glen.

When his full-time tenure with Petty ended during the 2003 season, Andretti began a diverse schedule behind the wheel that included starts in the NASCAR Cup Series, XFINITY Series and Gander RV & Outdoors Truck Series, GRAND-AM Sports Car Series and NTT INDYCAR SERIES.

Andretti made a popular return to the Indianapolis 500 in 2007 with Panther Racing, competing in "The Greatest Spectacle in Racing" every year through 2011. His final two "500" starts, in 2010-11, came while driving for his cousin Michael's team, Andretti Autosport.

For all of Andretti's versatile skills as a driver, he was equally or more admired for his charity work outside of the cockpit.

Andretti and Indianapolis-area radio personality Dave "The King" Wilson co-founded the "Race for Riley," an annual go-kart race in Central Indiana that has raised nearly $4 million for the Riley Children's Hospital in Indianapolis since its inception in 1997.

When he announced his diagnosis with late-stage colon cancer in April 2017, Andretti also started an aggressive campaign to urge regular colon screening, something he admitted he didn't do to catch his illness in its early stages.

The #CheckIt4Andretti campaign became a rallying cry during the 2017 Indianapolis 500 presented by Gainbridge, seen on many hats and T-shirts. The hashtag and campaign saved many lives through regular colonoscopies and still is shared frequently on social media.

Andretti is survived by his wife, Nancy, and children Jarett, Olivia and Amelia. Jarett Andretti has followed his father's tire tracks and drives in sprint cars, sports cars and Indy Lights.

Fans are encouraged to continue Andretti's legacy through regular colon screenings and by sharing the #CheckIt4Andretti hashtag on social media.

INDYCAR and IMS Statement on Passing of John Andretti

INDIANAPOLIS, Thursday, Jan. 30, 2020 – A statement from Penske Entertainment Corp. President & CEO Mark Miles, on behalf of INDYCAR and the Indianapolis Motor Speedway, about veteran driver John Andretti, who passed away Jan. 30 after a long, courageous battle with colon cancer. Andretti was 56.

"John Andretti's skills behind the wheel of any kind of race car were admired by his millions of fans around the world, and he always returned that loyalty and kindness to become one of the most popular drivers of his generation. But John's true mission was helping others, whether through his countless hours of charity work, especially with Riley Children's Hospital here in Indianapolis, or by the colon screening campaign he started in April 2017 after he was diagnosed with cancer. John's positive attitude and selflessness throughout his brave fight inspired all of us and will be a legacy that will continue forever. We extend our deepest condolences to his wife, Nancy, their three children and the entire Andretti family."