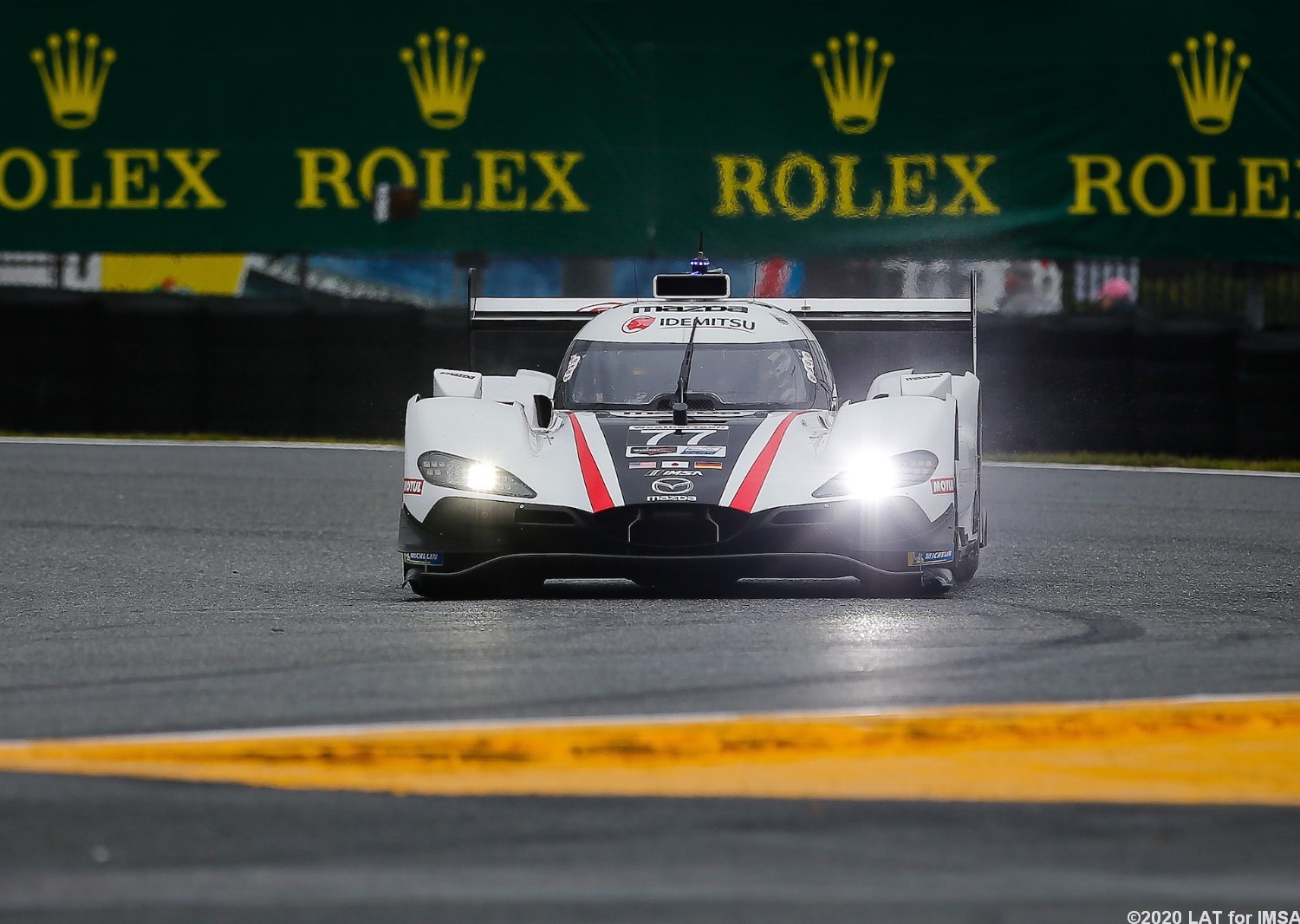 Oliver Jarvis claimed his second straight Rolex 24 at Daytona pole position for Mazda Team Joest easily beating Acura to the top spot in qualifying after Acura was neutered by IMSA before the weekend so they did not have the pace to win.

The Mazda DPi will share the front row of the grid with the No. 6 Team Penske Acura ARX-05.

Juan Pablo Montoya qualified the car with a time of 1:34.514, putting the Colombian 0.443 seconds off Jarvis while Ricky Taylor wadded up the sister #7 Penske Acura trying too hard.

Taylor lost control, bounced over the apex curb on the first left-hander of the chicane sequence, then went head-on into the tire barriers.

Taylor walked away from the incident which triggered a red flag stoppage and essentially locked in the prototype qualifying results with three minutes of the session remaining.

Mazda’s No. 55 will start from third after Jonathan Bomarito’s 1:34.619 effort while the No. 31 Whelen Engineering Racing Cadillac DPi-V.R. will start fourth.

PR1/Mathisen Motorsports will start from pole in the five-car LMP2 class after Ben Keating led the way in class qualifying.

Keating, who is also racing a GT Daytona-class Mercedes this weekend, posted a time of 1:37.446 to edge out DragonSpeed driver Henrik Hedman by two-tenths.

Laurens Vanthoor in the sister #912 Porsche was quickest before Tandy put up a 1:42.207, which was enough to claim the GTLM pole despite a late challenge from Vanthoor who ended up 0.049 seconds behind.

Corvette Racing will roll off third and fourth in the first race for the Chevrolet Corvette C8.R following GT Le Mans (GTLM) qualifying for Saturday’s Rolex 24 At Daytona. A three-time winner of the Rolex 24, the Corvette Racing program hopes to start the 2020 IMSA WeatherTech SportsCar Championship with a debut victory for the mid-engine Corvette.

Antonio Garcia set the quickest time for the team in the No. 3 Mobil 1/SiriusXM Corvette C8.R that he shares this weekend with Jordan Taylor and Nicky Catsburg. Garcia’s time of 1:42.545 (124.979 mph) put him just 0.338 seconds off Nick Tandy’s pole-winning time.

The No. 25 Team RLLL BMW M8 GTE of Philipp Eng was fifth followed by John Edwards in the No. 24 BMW and the No. 62 Risi Competitzione Ferrari 488 GTE Evo of Alessandro Pier Guidi rounded out the class.

Pier Guidi’s seventh place in class saw him finish almost 1.5 seconds off the pace in the seven-car class after IMSA neutered Ferrari so they have no chance of winning.

Pfaff Motorsports was quickest in the GT Daytona class after Zach Robichon went more than four-tenths faster than the rest of the field.

"The team's been working hard on the car," Westphal said after qualifying. "The co-drivers all tried to cohesively get the same package underneath us. We know it's a long race. We know we've got to have a car that's comfortable in multiple conditions. This was the best the car has felt. So, we're working the right way. The run felt really good. I was happy about it. I didn't quite get the draft I was looking for from the Porsche ahead of me. But, sometimes that's just how it goes. I'm happy none-the-less. Starting P2, for the first race of the year, is a great place to be. But, it's a long race."

The new Ferrari 488 Evo debuted at the Roar test and, so far, the car has performed well according to Westphal.

"To put the Ferrari 488 GT3 Evo on the front row for its first race is definitely something," Westphal said. "It's a testament to the engineering that goes behind the car, the team operating all of that, and the support that goes with it. It's a unit. We have help from all sides. Everyone is here for a common goal. Clearly, it's a good car. I like it. I was very happy with the balance I had. I was very happy with the tire wear. Again, it's a long race, but I'm confident that we've got a good weapon."