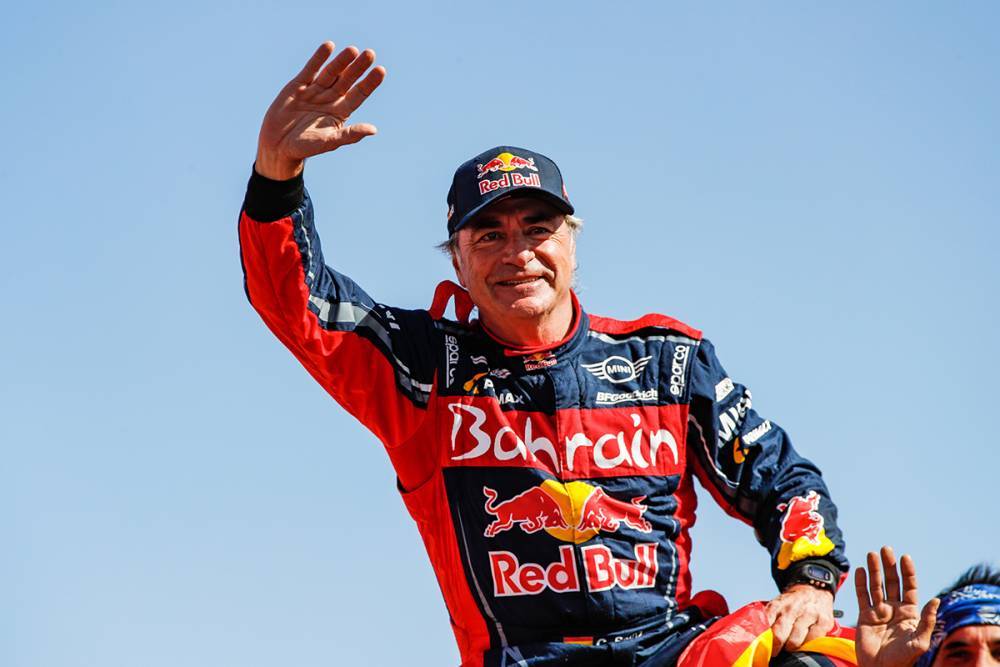 Though he missed out on victory, Al-Attiyah capped off a sixth podium in the last seven editions by beating Stephane Peterhansel to the runner-up spot.

With only six seconds in hand over Peterhansel to start the day, Al-Attiyah caught and overtook the Frenchman's road-opening Mini buggy to cement himself in second place.

“There’s a lot of effort behind (this); a lot of training, a lot of practice, physically with the team…

“For such a veteran driver, it’s great; you have to work very, very hard."

When asked where he thought he won the event, the 57-year-old responded, “Since Day 1.

“I think we only know, the three of us (Sainz, Al-Attiyah, Peterhansel), how much we were pushing since Day 1. It has been a flat-out rally from the beginning."

It had been 31 years since the world's leading maker had last won the Dakar. No American had ever won the greatest rally raid on Earth before. Ricky Brabec and his Honda 450 CRF made history in Qiddiya today. The Californian moved into the lead after the third special and adroitly defended his advantage throughout the remaining stages. In contrast with last year, when his motorbike let him down with three stages to go, this time it worked like clockwork all the way to the finish line. It is a well-deserved reward for a biker who always tackled the race head-on, but also for Honda, which reaped the fruits of its patience since its official return to the Dakar in 2013.

Year after year, the HRC team remained steadfast in the face of adversity, eventually managing to develop a reliable motorbike, overhaul its structure and strike gold with the magic formula for success that allowed it to end KTM's 18-win streak going back to 2001. No-one else was more aggressive than Pablo Quintanilla behind Brabec. The Chilean biker rode his Husqvarna to a rock-solid second place after taking a year to recover from the injuries sustained during the last Dakar held in Peru. 2019 champion Toby Price took the bottom step of the podium. Finally, Romanian Emanuel Gyenes claimed victory in the Original by Motul class with more than an hour to spare over Benjamin Melot.

With the victory, Ricky Brabec (Hesperia, California, USA) becomes the first ever American rider to clinch the Dakar Rally. The rider concluded this year’s edition with two stage victories, in a rally which he led uninterruptedly from stage three. Consistency proved to be Brabec’s secret weapon, while deft navigational skills and pace aboard the Honda CRF450 RALLY also helped him scoop the most coveted prize in off-road racing.

Monster Energy Honda Team delivered an excellent showing throughout the entire 2020 Dakar Rally campaign. The rally covered some 5000 kilometers of timed special stage and a total distance of 7800 kilometers, where, in addition to the two Brabec stage victories (stages 3 and 6), can be added those of Jose Ignacio Cornejo (stage 4 and stage 12), Kevin Benavides (stage 7) and Joan Barreda (stage 10), as well as plenty of top partial times, with the Honda squad seizing podium lock-outs on both stages 3 and 10.

This represents the sixth Honda victory at the Dakar Rally after the five clinched in Africa, the most recent occurring 31 years ago: Ciryl Neveu (1982, 1986, 1987), Edi Orioli (1988) y Gilles Lalay (1989) took the previous top honors. In 2013, Honda returned to the Dakar Rally after a 23-year absence. During that eight-year spell, Team HRC has been on the final podium on two occasions: Paulo Goncalves (2015) and Kevin Benavides (2018) both in runner-up positions.

[adinserter name="GOOGLE AD"]A lackluster performance in the SSV category last year convinced Ignacio Casale to go back to the machine of his dreams in 2020 for the first Dakar held in Saudi Arabia. It was as if no time had passed for the two-time winner of the rally, who proceeded to stamp his authority on the quad race from the get-go. The Chilean dominated the general classification from start to finish and faced no real opposition despite the best efforts of two-time stage winner Simon Vitse and fellow Chilean Enrico Giovanni, who may come to rue withdrawing in stage 6. Casale killed the suspense with four stage wins and an insane level of consistency, only finishing once outside the top 4. The 45 minutes wasted searching for a waypoint during stage 10 were the only bump in the road for the Chilean, who has now drawn level with Marcos Patronelli as a three-time Dakar champion in the quad category.

SSVs: Consistency does the trick for Currie

At the start of the race in this wide-open and fast-growing category, Casey Currie was just one among several men to watch. The American driver bided his time until the second week before upping the ante, leaving the spotlight to more seasoned competitors such as defending champion "Chaleco" Lopez (2 stage wins), 2018 winner Reinaldo Varela (2), 2019 runner-up Gerard Farres (2) and five-time motorbike champion Cyril Despres (1), as well as the up-and-coming Blade Hildebrand (2), Mitchell Guthrie (2) and Aron Domzala (1). As numerous as the stage winners were, each and every one of them had at least one bad day that dashed his hopes of winning the Dakar outright. Currie, on the other hand, remained consistent throughout the rally to claim his first Dakar in what was only his second start at the wheel of his Can-Am, beating Sergey Karyakin, who is also going home without a stage win but was happy to finish on the podium after his triumph in the quad category in 2017.

Trucks: Karginov keeps it in the Kamaz family

Coming from three consecutive victories, Eduard Nikolayev looked every bit the big favorite to win the 42nd edition of the rally. However, the defending champion was off the pace from the beginning and ended up withdrawing due to serious mechanical troubles with his Kamaz truck. The Russian maker showed the depth of its team, starting with 2014 champion Andrey Karginov. The 43-year-old bounced back from an uninspired performance in the opening stage to steal the show with seven stage wins and an infernal pace that left his rivals —and teammates— in the dust, to the point that runner-up Anton Shibalov finished over 42 minutes behind the leader in Qiddiya despite taking three stage wins along the way. Meanwhile, Siarhei Viazovich ended up over two hours back after his strong early performances turned out to be a desert mirage…

PERFORMANCE OF THE DAY A first for America

Ricky Brabec became the first American to win the Dakar, beating SSV driver Casey Currie to the punch by a matter of minutes. It took 42 years to see the Stars and Stripes fluttering atop the podium, even though many Americans had come close to victory before. Back in 1985, Chuck Stearns finished sixth overall with six stage wins under his belt, while Danny Laporte was runner-up to Peterhansel in 1992. A few years later, Jimmy Lewis, now working as Brabec's trainer, took third place in 2000, followed by Chris Blaisa in fourth place in 2006. Robby Gordon flew the flag for the USA in the car category, but he never managed to improve on his third place in 2009 despite ten spectacular stage wins.

A CRUSHING BLOW No longer do the tuning forks ring true

Yamaha came into the Dakar as Honda's big rival in their attempt to end KTM's domination of the motorbike category, with two world-class bikers who fit the bill as potential Dakar champions. However, Adrien Van Beveren (fourth in 2017) and Xavier de Soultrait (seventh last year) crashed out of the race in stages 3 and 4, respectively. The Yamaha duo were also the leading French contenders, leaving France without a biker in the final top 10 for the first time in the history of the Dakar. Sherco's Adrien Metge came in twelfth. It was not all bad news for Yamaha, though, with Franco Caimi cracking the top 10 in eighth place and rising star Jamie McCanney finishing 15th overall as the second best rookie, right behind Spaniard Jaume Betriu.

Nasser Al-Attiyah would have probably traded his victory in the closing stage of the rally for the 6â€²21â€³ that separated him from the overall leader, Carlos Sainz. However, it would have spelt the end of his own record run of 13 editions of the Dakar claiming at least one stage win —one of the few records not held by Peterhansel or Vladimir Chagin.

QUOTES FROM THE WINNERS

"At the end, we put the pieces to the puzzle together. We couldn't do it without every rider in the team. I'm really happy. It's my fifth Dakar, my second time finishing… I woke up this morning just happy to ride the last day. And we're here. We won! We had to be smart and focused every day. There's no top guy on the team, we all work together, we're a family. We all won."

Carlos Sainz: "We have gone flat out from the beginning"

"I feel very happy. There's a lot of effort behind this. A lot of training, practice, physically, with the team… We started winning this Dakar on day one and we have gone flat out from the beginning."

"I'm delighted to be here. I've won my third Dakar. I'm elated because it was a long, grueling race. I had some problems during the second week, but we solved them as well as we could. We worked hard all year long with the mechanics and now I can celebrate this win. Thanks a lot and Viva Chile!

"Two Americans on top! I'm blown away, man! Sean and my team did a phenomenal job. The car ran great all the time. It's just an epic experience, and I'll never forget it, for sure. This is my most emotional win ever. The amount of pressure that was on me was incredible. I love this rally! We're coming back next year to defend our title. I'm very stoked for Ricky Brabec, he deserves it more than I do."