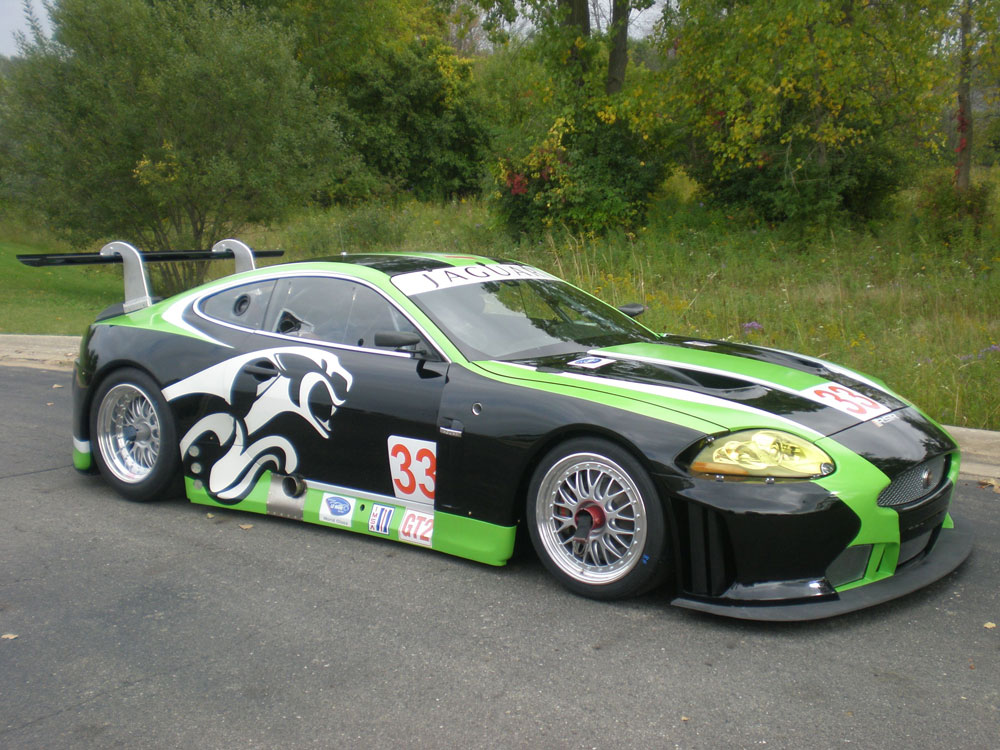 In preparation for a full championship effort in 2010, RSR unveiled its Jaguar XKR GT2 at the American Le Mans Series’ famed event – the 12th annual Petit Le Mans powered by MAZDA6 – with the intention to introduce the car and utilize the track time for testing and development. The Jaguar brand is launched into what everyone considers the deepest GT2 class in the history of the Series and will have to face off against the likes of Ferrari, Porsche, BMW, Corvette, Panoz, Dodge, Viper and Ford.

From a production car, the Jaguar XKR makes an excellent racecar. “The Jaguar XKR is exceptionally strong and rigid, and the construction method is in advance of the conventional steel stamping that we see in cars today," explained Paul Gentilozzi, RSR team owner. “That allows RSR to build a lighter, stronger, stiffer race car. Also, the basic aerodynamic design of the XKR has a low drag coefficient and more than sufficient downforce."

The GT2 class features production-based cars modified as allowed by Automobile Club de l’Ouest (ACO) rules. “There are very specific limitations. We use what we call in the industry, the Body-In-White," Gentilozzi added. “That is the basic skeletal structure, the sub-frames and frames from the original production car. We started our GT2 car with a real Jaguar XKR, this is not a panel built or fabricated car. We are using all of the aluminum skeletal structure of the car, the production doors, roof and deck lid."

The bodywork features a design that is based on the Jaguar XKR and was completed in the Jaguar Advance Design Studio headed by chief designer Ian Callum. The body has undergone intensive computational fluid dynamics work – known as CFD – by the Jaguar aerodynamics department. Information from the CFD was then incorporated into the finished body work which was made in clay at the RSR facility. More than 1,100 man hours were spent during the clay process. The carbon fiber composite body work was molded and produced by a local company in Michigan and conforms to the ACO guidelines.

“The end result is a GT2 car that contains the DNA and the spirit of the Jaguar Design Department and the production car," comments Gentilozzi.

Yokohama has been announced as the official tire supplier. “Partnering with RSR on the Jaguar XKR GT2 in the American Le Mans Series is a perfect fit for Yokohama," said Mark Chung, Yokohama Tire Corporation director, corporate strategy and planning. “Motorsports is a core element in what we do. It's in our DNA – we like to compete and we like to win, and so does RSR. Our collective efforts will certainly put us among the leaders in GT2 next year. We are definitely eager to get going."

RSR is working very closely with Bosch Motorsport to integrate its technologies for engine control and chassis data acquisition. The car will be equipped with a Bosch Motorsport ECU and data logger with color display, as well as Bosch spark plugs.

Gentilozzi has had a long relationship with brake supplier Brembo, winning races in Trans-Am and Champ Car. Brembo six-piston front calipers on 380 mm discs with four-piston rear calipers on 350 mm discs have been installed and actuated by a Tilton floating master cylinder pedal assembly. A 5.5-inch Tilton metallic clutch will allow power to flow from the modified Jaguar AJ133 engine to a Hewland CST Transaxle.

A five time Trans-Am Series champion, Gentilozzi will wear multiple hats for the team, as not only the owner but also one of the three drivers designated to race the car. He will be joined with sports car veterans American Scott Pruett and Belgian Marc Goossens. During the testing and development process these seasoned drivers will play a key role in getting the Jaguar XKR up to speed for a strong fight in 2010.