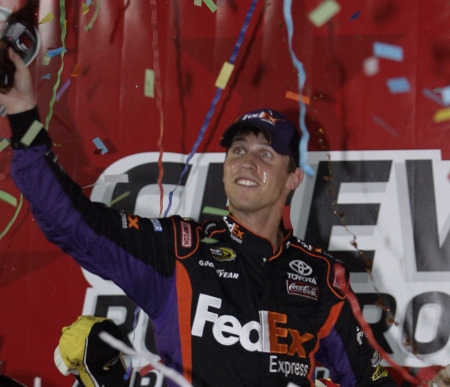 The Chase is on.

The suspense of who would make that field culminated Saturday night at Richmond International Raceway.

Local native Denny Hamlin from Chesapeake finally won a NASCAR Sprint Cup race at his home track after coming "oh, so close" so many times before. He also did it in convincing style, battling door-to-door with Jeff Gordon along the way. It was Hamlin's second win of the season in his FedEx Toyota. He won earlier this year at Pocono.

Hamlin is one of the 12 Chase participants but his Joe Gibbs Racing teammate Kyle Busch didn't make it. Hamlin had locked in a spot before the race but Kyle needed to finish well ahead of Brian Vickers to make it. Kyle finished fifth but Vickers was seventh and wound up grabbing the 12th spot by eight points over Busch.

Kurt Busch finished second and made the Chase. Jeff Gordon was third and in The Chase.

Everybody's favorite, Mark Martin, was fourth and secured a Chase spot and there wasn't a happier man in Virginia on Saturday night when this race ended.

Kyle finished fifth and Clint Bowyer was sixth. Vickers was seventh and former Indianapolis 500 winner Sam Hornish finished eighth. Kevin Harvick was ninth and Ryan Newman 10th, which earned him a slot in the Chase, along with his car owner Tony Stewart, who had a rough night and wound up 17th.

Jimmy Johnson finished 11th and he's in the Chase, along with 12th-place finisher Kasey Kahne and 13th-place finisher Greg Biffle. Carl Edwards and Juan Pablo Montoya also made the Chase. It will be Montoya's first Chase as well as the first for team owner Chip Ganassi.

Former series champion Matt Kenseth finished 25th and failed to qualify for the Chase for the first time.

Saturday night’s race at Richmond had so many scripts, you couldn't keep up. If so-and-so finished 20th or better, he made the Chase. If another driver finished 32nd, he made it.

This one was one for the record books, as only four drivers were guaranteed spots in the Chase to the NASCAR Sprint Cup and another eleven were in position to make it with either good luck for themselves or bad luck for others.

The ageless Martin, hoping to be one of the 12 contenders, started from the pole position after a late shower wet the track and delayed the start.

Scott Speed brought out the first caution when he lost it off Turn 4 and hit the outside wall.

Hamlin went out front again when the race restarted on Lap 50. Another caution was necessary when Regan Smith's Chevy lost power on Lap 57.

On this restart at Lap 67, Hamlin held the lead with Gordon next, followed by Martin, Truex, Kurt Busch, Earnhardt, Harvick, Johnson, Kyle Busch, AJ Allmendinger, Montoya, Kahne, Vickers, Marcos Ambrose and Jamie McMurray. The Roush Fenway Racing drivers, at this point in the race, were pushing it to make the Chase with Edwards 20th, Biffle 24th and Kenseth 25th.

Gordon went back in front of Hamlin shortly before the 100-lap mark. A caution fell again on Lap 107.

Gordon held the lead until Hamlin slipped past on Lap 147. Another caution flew on Lap 173 for debris.

At the half-way point of 200 laps, here's how things stood: Hamlin continued to swap the lead with Gordon and Martin ran a strong third.

Another caution fell shortly after halfway when Regan Smith's bad luck continued and something broke on his car.