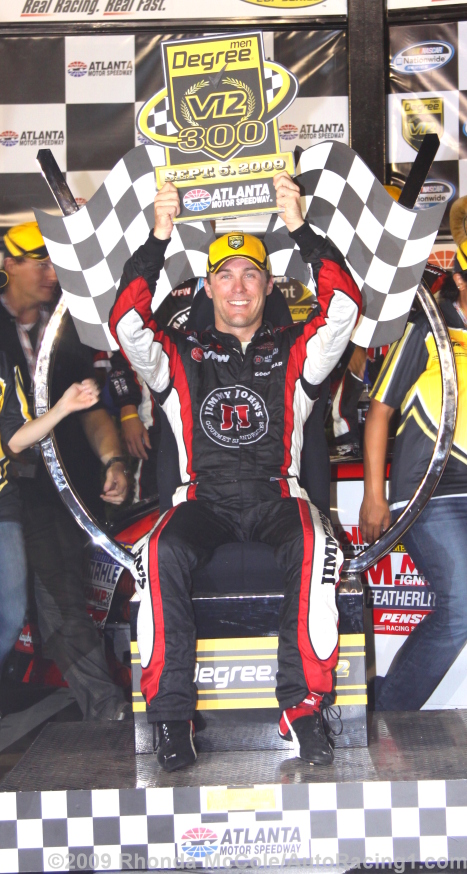 Dale Earnhardt, Jr. tried to play the role of the spoiler, but no one was going to stand in Kevin Harvick’s way as he overcame a bad pit stop and a determined charge from Kyle Busch to win Saturday night’s Degree V12 300 NASCAR Nationwide Series race at Atlanta Motor Speedway.

Harvick – driving his own Kevin Harvick, Inc. no. 33 Chevrolet – trucked down Earnhardt as he tried to stretch his fuel reserves to the end of the race, finally catching Earnhardt with three laps to go.

Busch followed past Earnhardt, looking to make a final run at Harvick, but ended up losing ground in the final lap as Harvick pulled away to a 1.13 second victory over Busch for his second Nationwide win of the season.

Earnhardt hung on for third, followed by Brad Keselowski and Jeff Burton.

For Harvick, it was a sweet homecoming to the track where he scored his first Sprint Cup victory in 2001, coming in just his third start after taking over the car of the late Dale Earnhardt following his fatal crash just three weeks earlier.

“I knew Kyle was quite a bit better for about ten laps, and then after that, the thing was just incredible to drive," said Harvick. “I was a little bit worried there at the end. I really thought everyone had to pit. We cut it a little closer than I wanted to.

“We’ve left here with our tail between our legs every time we’ve been here at last two years. We don’t like to lose. It motivates us."

The first Nationwide Series race run under the lights at Atlanta Motor Speedway turned into the Kevin and Kyle show, as the two Sprint Cup drivers combined to lead 176 laps.

Harvick took over the top spot from Earnhardt on lap five, leading the next 22 laps before Busch grabbed the lead on lap 28.

Each time Busch seemed to get ahead, Harvick would come right back and take the lead yet again. It would be a theme that would be repeated no less than nine times during the 195 lap race.

Not having a car to match Harvick, Earnhardt and crew chief Tony Eury, Jr. decided to gamble on fuel mileage and run the last 70 laps without stopping for fuel.

It was a strategy that almost worked, as Busch and Harvick both ducked to pit road for fuel and four tires with 14 laps to go, giving Earnhardt the lead.

Harvick, who earlier had to contend with a slow pit stop, was again hindered by a slow stop, yet still managed to get out ahead of a streaking Kyle Busch, but still nearly half a lap behind Earnhardt.

With ten laps to go, Harvick was charging back through the field with his fresh tires, gaining more than a second a lap on Earnhardt, who was pedaling to save fuel.

With seven laps to go, Earnhardt was told to “pick it up", but he was no match for Harvick, who easily ducked under Earnhardt to take the lead for the final time.

“We had a pretty good chance of making it (on fuel), and it was really our only chance," said Earnhardt, Jr. “The 18 (Busch) and 33 (Harvick) just had everybody covered."

Busch pulled past Earnhardt to take second as they came to the white flag, but Busch’s car pushed up the racetrack as he made the pass on Earnhardt, costing him valuable track position that he never could regain.

“That was all we had. We had a second-place car today," said a frustrated Busch. “We had (Harvick) beat for about 15 to 18 laps and then he’d get by us and beat us in the long run. Whenever we would come in to put tires on, about 18 laps later mine would just lose grip. That was all we had. I had nine laps of fresh tires to catch him, and I gained on him a lot. I just couldn’t quite get there."

Carl Edwards, nursing a broken right foot, toughed it out to a solid seventh-place finish but ended up losing 29 points to Busch in the Nationwide Series points standings, now trailing the leader by 221.