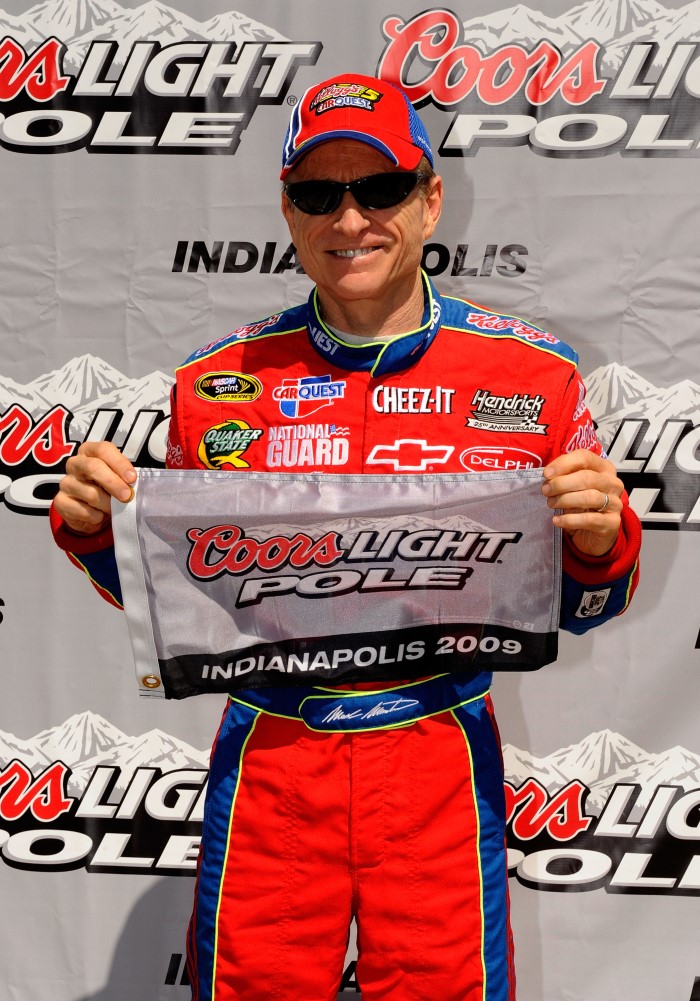 Mark Martin stayed atop the speed charts for a second consecutive day at Indianapolis Motor Speedway on July 25, this time winning the pole for the 16th Allstate 400 at the Brickyard.

"I like making history; that's cool," Martin said. "Yesterday was a lot of fun for me. We struggled through race trim practice and then we went into Q (qualifying) trim and we made improvements. We made three qualifying runs, the last one was about 10 minutes left of practice, (and) we went to the top of the board. You should have seen the light in all my guys' faces.

"I put a lot of pressure on myself to get a good lap today so that I wouldn't let them down."

Montoya equaled his best Allstate 400 at the Brickyard start with his second-place effort of 180.803 in the No. 42 Target Chevrolet. He started and finished second in 2007, his rookie year in NASCAR Sprint Cup Series racing.

In what could be a good omen for Montoya, he is driving a Target Chevrolet painted in the same scheme as the IndyCar in which he won the 2000 Indianapolis 500 – after qualifying second. He also remains the only driver in history to start the Indianapolis 500, Allstate 400 at the Brickyard and United States Grand Prix at Indianapolis Formula One race, and Montoya is eager to leave his mark as winner of another form of racing at IMS.

"Started twice second, so we'll see," he said, "From practice, we have probably the fastest car. But not always the fastest car wins. I think today if I looked at it, I'd rather win this than the Formula One race here, to be honest. I think it's a bigger deal."

Dale Earnhardt Jr. also equaled his career-best qualifying effort of third at the 2.5-mile IMS oval with a lap of 180.567 in the No. 88 AMP Energy/National Guard Chevrolet despite suffering from a stomach virus, while Bill Elliott set a record with his fourth-place qualifying speed of 180.357 in the No. 21 Motorcraft Ford. It is Elliott's ninth top-10 start at the Allstate 400 at the Brickyard, the most of any driver.

David Reutimann completed the top five starters with a lap of 180.216 in the No. 00 Aaron's Dream Machine Toyota. It's his best career start at IMS.

Qualifying was delayed almost three hours due to heavy rains in the morning, but the full field qualified under mostly sunny, warm conditions. Ryan Newman led final practice at 176.706 in the No. 39 Haas Automation Chevrolet.

Among the drivers with Indiana ties, Sprint Cup Series points leader and two-time Allstate 400 at the Brickyard winner Tony Stewart will start seventh in the No. 14 Old Spice/Office Depot Chevrolet, Newman qualified 17th in the No. 39 Haas Automation Chevrolet, David Stremme will start 21st in the No. 12 Penske Dodge, four-time "400" winner Jeff Gordon qualified 22nd in the No. 24 DuPont Chevrolet and John Andretti, who also competed in the2009 Indianapolis 500, will start 35th in the No. 34 Taco Bell Chevrolet.