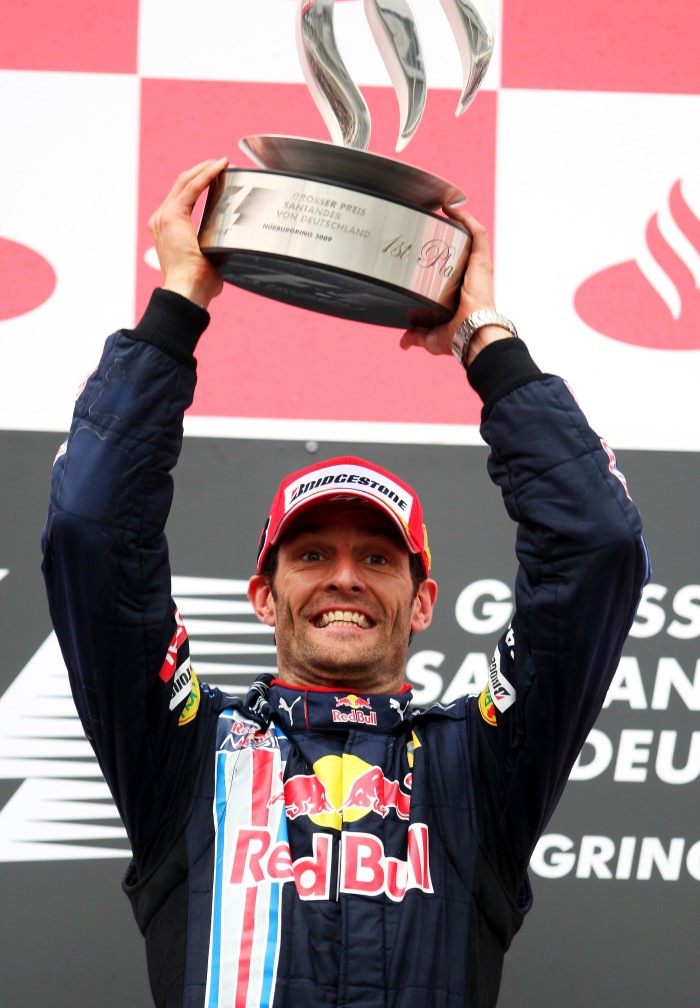 Two days on, are you still basking in the glow of what you’ve done?
Absolutely. It was a very special day. Personally, for me it was very nice but the fact that the team also got another one-two seems to have got ignored, but that was also very important. We’ve made the most out of the last couple of races, in which we couldn’t have done better. I’d had two second places, so I knew the momentum was with me and now I’ve got the win. It’s just great to finally get the victory.

On Saturday night, after taking pole you said, “now we’ll try and get this monkey off my back." Is the sense of relief almost bigger than the sense of achievement?
That’s probably true. I’ve done a lot of races and for a huge majority of them, I didn’t have a chance of winning because the car wasn’t up to it and also, they featured a guy called Michael Schumacher and he tended to do a bit of damage himself. In that era, you needed to be in a Ferrari or a McLaren. Now, in this new era of F1, there are other teams in the mix and I am very happy that the situation with Red Bull Racing means we are in a position to challenge for podiums and wins at every grand prix, as long as we get things right.

You had almost 100 well wishing texts prior to the race. Did that give you extra pressure?
I had around 80 or 90 after qualifying and maybe 160 after the race. I didn’t know so many people had my bloody number! But, to be honest, I was pretty relaxed going into the race. I was keen for it to be dry, because that would mean fewer decisions to be made. I felt we probably had the Brawns covered and that my real opposition was going to be Sebastian maybe at some point in the race. Then the race exploded pretty quickly with drivers like Heikki (Kovalainen) in the mix and my drive-through penalty. But after around lap 40, I knew I just had to stay on it and bring the car home.

Some drivers, Mansell and Hakkinen for example, took a long time to get win number one, but after that they were unstoppable. Allowing for the fact they obviously had competitive cars, do you feel it’s unlocked a door and winning could get easier now?
I’ve now crossed the uncharted waters of pole position and a victory, so that can only help. It can’t be a hindrance, that’s for sure. To lead and not be the chaser was a first for me. I hope that the momentum can continue, even if there is no doubt there will be some tough races in the future. But getting this first win means that when it’s close, the races might seem more straightforward for me. You flew back Sunday.

Were there any celebrations?
I think I made a bit of a schoolboy error. We got back to the UK late on Sunday night and the downside was that Australia was just waking up, so having dealt with all the press here in Europe, I then had to deal with my home continent. I was flat out from nine in the evening ‘til two in the morning, as so many people were getting in touch to congratulate me. I couldn’t bring myself to switch my phone off, so there wasn’t much sleep, that’s for sure.

You attended the Red Bull Racing factory debrief on Monday. What sort of reception did you get?
It was incredible. As an intro for me, they played the recording of my car-to-pit radio as I crossed the line. I didn’t realize how long I was shouting for! The response was incredible. There are still a lot of people at the factory whom I worked with back in my Jaguar days there and we have been through a lot together. There are also a lot of new people, who haven’t been in Formula One for that long and they are at the start of an incredible journey. As a team, as a group of people working together, including those at Renault, everything that Dietrich (Mateschitz) has done, and Adrian (Newey) with his group and Christian (Horner), we have finally unlocked the door to success. The past few years have certainly been tough, but now we have clearly made the most of the new regulations and shown we are a team that can fight at the front. We know we can expect some fights this season with other teams coming through, but that’s what this sport is about and we’re ready for it.

Then on Monday night, you went to a dinner with the Aussie test cricket team. What happened there?
Ricky Ponting had a Foundation Dinner for his charity, which was a great event. He was kind enough to give me and Ann a fantastic table, so it was a wonderful night to be there with my cricketing heroes. There were over a thousand people and they made a bit of a deal about me being there which was nice. The reception from the English people at the event was equal to that from the Australians, which made me feel good too.

There’s been a huge reaction from Australia. The whole country is really sports mad isn’t it?
Yes, it takes a bit to get on the front pages of the papers there, but I am on them and that’s a great feeling too. It’s good for Red Bull and it’s true that, in Australia, if one of their sportsmen or women achieves something on the world stage, it is recognized.

There was a lot of talk last weekend about Sir Jack Brabham, did you hear from him after the race?
Yes, I got an email from him and his son, David, which was great. The Brabham family has always been fantastic towards me. I remember fifteen years ago, Jack telling me that he had always found it great to come over and beat those Europeans, even if he didn’t put it quite as diplomatically as that! Certainly, a small part of my victory is down to Jack, because my father was a great admirer of his and probably I wouldn’t have been racing cars without Jack lighting that little fire in the Webber family.

You sounded almost in tears on the slowing down lap. Can you remember what thoughts went through your mind as you drove back to parc ferme?
There were two main thoughts: I wanted to see my team. It’s always the first thing you want to do. The “in" lap is okay, but really you’re busting to get back and see the guys. The other thing was that I wanted to hear my Australian National Anthem.

Before the race you said that if you were leading, it would seem like the longest race ever. Did it, or was there so much going on what with the collisions, penalty etc?
It was pretty normal really and no, it didn’t drag much. Or maybe just a little bit through laps 40 to 47, when it got dark and I thought ‘shit, it’s going to rain’. I wanted to fast-forward a bit at that point as I didn’t want us to have to take any more decisions. The last ten laps didn’t take that long. It was good actually and I was surprised at how relaxed I felt, controlling the race to the flag.

There’s only 1.5 points between you and your team-mate. How do you think the two of you are going to deal with this?
The good thing is that it’s incredibly straightforward. All we drivers and the team have to do is turn up and try to do the best job we can. We know how important Saturday’s qualifying is and maybe one day that part of the weekend might not go as smoothly as planned for either myself or Sebastian. Plus there are other rivals mixed into that, so it’s not just a straight fight between the two of us. Sebastian and I might come across each other quite a bit in the races and that will be reflected in the points tally. It will continue to see-saw either way until one of us has a blip in performance. It’s unrealistic to expect us to have one-two finishes through to the end of the year and there will be interesting grands prix to come. For the team, it’s an incredible position to have both its drivers on virtually equal points, which bodes very well for the Constructors’ Championship. Jenson (Button) is our big hurdle in the Drivers’, as he is two grands prix in the lead in terms of points.

After the race, your Dad said, “This is the greatest day of my life" and then corrected himself and added “at least equal with a couple of others." He’s not exactly Mr. Pushy Dad thank goodness, but how would you sum up how he’s helped you in life and in your career?
He’s been incredible, particularly in the early days, because when you are very young, in your early teens, you can’t make all the big decisions for yourself and you need support. Dad was always very much a single-seater man and, as he said, “I wouldn’t like you to race taxis and I think the best racing car drivers in the world are in single-seaters," so that was always the path we followed. I think back to how incredibly balanced he was with me, when I was out of the car, in terms of the total lack of pressure he put on me to go and do my best. He never had any problems with the guys I was racing, like some of the other bloody fathers can do. He doesn’t get heavily involved and that’s always been his style. Of course he’s proud, but he’s always let me get on with it and it was good to have him there for that special day.