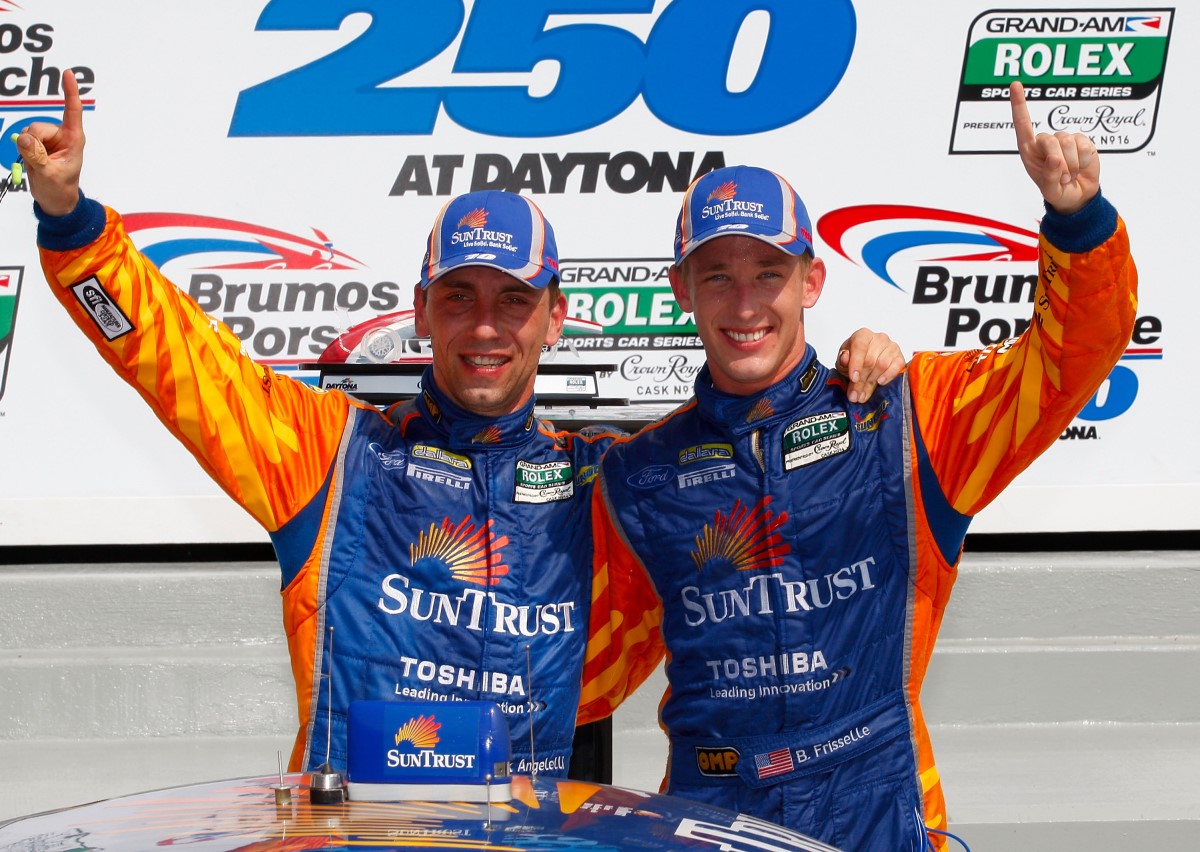 For the second straight year, Alex Gurney lost a heartbreaker in the Brumos Porsche 250 at Daytona International Speedway. Max Angelelli held off a last-lap charge Saturday to win Round 7 of the 2009 Grand-Am Rolex Sports Car Series presented by Crown Royal Cask No. 16, winning by .270 seconds – the fifth-closest finish in the history of the series.

Angelelli, who also won this event in 2004, co-drove with Brian Frisselle in the No. 10 SunTrust Ford Dallara. Angelelli led the final 33 of 70 laps to give the team its first victory since last year at Infineon Raceway, and allowed the two drivers to close to within one point of point leaders Scott Pruett and Memo Rojas (199-198). Gurney and Jon Fogarty are another two points back with 196.

"It was a very fair game," Angelelli said after scoring his 13th career Daytona Prototype victory, second all-time. "It was a good, tough battle. It was really difficult today. Thanks to SunTrust Racing for the good car they gave me. I went out for my stint in the lead, which was really important."

It was the third career victory for Frisselle, and first since joining the Wayne Taylor-owned team in 2009.

It was also a very hot battle. The event – traditionally held in the evening – was moved to 2 p.m. to set up a holiday doubleheader that also included the Coke Zero 400 for the NASCAR Sprint Cup Series. The race was held in 90-degree temperatures and high humidity. NASCAR Sprint Cup Series drivers Kyle Busch and Scott Speed prepared for their race by running the Brumos Porsche 250, finishing 10th in their Rolex Series debut in the No. 02 Waste Management Lexus Riley fielded by Chip Ganassi Racing with Felix Sabates.

""It was miserably hot out there," said Fogarty, who led eight laps. "We had a pretty good opening stint and were able to get by the No. 01 car, which was obviously a main objective since they're leading the points."

A year ago, Gurney led Scott Pruett throughout the final laps, only to lose on a last-lap slingshot. While he managed to briefly gain the advantage in the infield several times in the closing laps, Angelelli was able to regain the lead on the NASCAR oval.

"It was a very eventful race for me," Gurney said. "It was very hot and very slippery out there. We were down one or two mph on the banking and maybe that hurt us. But Max drove a great race, nice and clean. We didn't win, but we feel really good about the rest of the season after this."

Pruett gained three positions in the closing laps to place seventh in the No. 01 TELMEX Lexus Riley. Memo Rojas started from the pole and led 18 laps. However, he cut a tire on his last lap before turning the car over to Pruett, who rejoined the race 13th.

Taking third was the No. 45 Orbit Racing BMW Riley for Ryan Dalziel and Bill Lester, who scored his first podium finish in Rolex Series competition.

"Our car was good from the moment we unloaded it," Lester said. "We feel like we can be much more formidable, a force to be reckoned with. We're really excited about what the future holds."

The No. 6 Michael Shank Racing Ford Riley nearly missed the race after John Pew crashed late in morning practice, causing extensive damage to the front end of the car co-driven by Michael Valiante. The team repaired the car with moments to spare before the start, and came from 17th to finish fourth.

Rounding out the top five was the No. 61 AIM Autosport Ford Riley of Burt Frisselle and Mark Wilkins, which started last on the 19-car grid after a post-qualifying infraction.

Also leading the race was the No. 13 Lennox/Brach's Chevrolet Riley, with Ricky Taylor pacing 11 circuits midway through the race. Taylor and Mike Forest finished 12th.

David Donohue, who co-drove to victory in the season-opening Rolex 24 At Daytona, went to the garage after an electrical fire in the No. 58 Brumos Porsche Riley. The team replaced the wiring harness to enable Donohue and Darren Law to score points. Buddy Rice and Antonio Garcia, who also shared in the Rolex 24 victory, were competitive in the debut run of the No. 90 Spirit of Daytona Porsche Coyote before a mechanical malfunction caused Garcia to crash in the tri-oval on Lap 36, bringing out the second and final caution.

The two cautions helped to an average speed of 114.918 mph, the third-fastest race in Rolex Series history.

Dirk Werner led the final 29 laps to lead the No. 87 Farnbacher Loles Racing Porsche GT3 to its third consecutive victory and fourth in five races, opening a 29-point lead (221-192) in the battle for the Acxiom GT championship.

Werner held off Sylvain Tremblay by 1.531 seconds, denying the No. 70 Castrol Syntec Mazda RX-8 started by Nick Ham its third consecutive victory in the event.

While Ham led the opening 35 laps, Keen ran a steady second and led a lap before turning the cover over to Werner.

"For our success, the key is that Leh Keen keeps our car in the front in the beginning of the race," said Werner, the 2007 GT champion. "In the beginning of my run, Sylvan was not putting pressure on me. He was trying to stay close. I knew he would try to attack me at the end of the race – which he did."

Problems struck both of the Pontiac teams that were running 2-3 in the championship. Andrew Davis pulled off in the No. 57 Stevenson Motorsports Bryan Mark Pontiac GXP.R with overheating problems after only six laps, meaning neither Davis nor co-driver Robin Liddell scored points after entering the event third in the standings. Kelly Collins spun and lost his windshield after contact with Lux as GT contenders ran three-wide in Turn 1early. Collins and Paul Edwards returned to finish ninth in the No. 07 Drinkin' Mate Pontiac GXP.R. They remain second in points.

Patrick Dempsey ran as high as fourth in the No. 40 El Grado Tequila Mazda RX-8. Co-driver Joe Foster then took over but was slowed after an encounter with a Daytona Prototype and finished 11th, ending a streak of six consecutive top-10 finishes.

Round 8 for the Grand-Am Rolex Series will be the Porsche 250 presented by Legacy Credit Union July 19 at Barber Motorsports Park in Birmingham, Ala. The weekend will also include a pair of KONI Sports Car Challenge races.