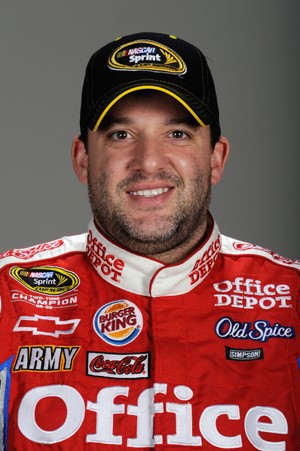 An afternoon rain shower is hardly unusual in Florida.

Tony Stewart starting on the pole because of a qualifying rainout is becoming almost as commonplace.

NASCAR canceled Friday's time trials at Daytona International Speedway after a thunderstorm drenched the track, and as a result, the Sprint Cup points leader will start from the top spot because of rain for the third time this season.

With the top 35 cars in the 43-car field for Saturday's Coke Zero 400 set according to owners' points, Stewart will start next to Jeff Gordon, the driver closest to him in the standings. Three-time defending series champion Jimmie Johnson rolls off third, with fourth-place Kurt Busch to his outside.

Carl Edwards, Denny Hamlin, Ryan Newman, Kyle Busch, Greg Biffle, Matt Kenseth, Mark Martin and Juan Montoya will be credited with the fifth through 12th positions, respectively. Because Biffle was involved in a crash during practice on Thursday and went to a backup car, however, he will start from the rear.