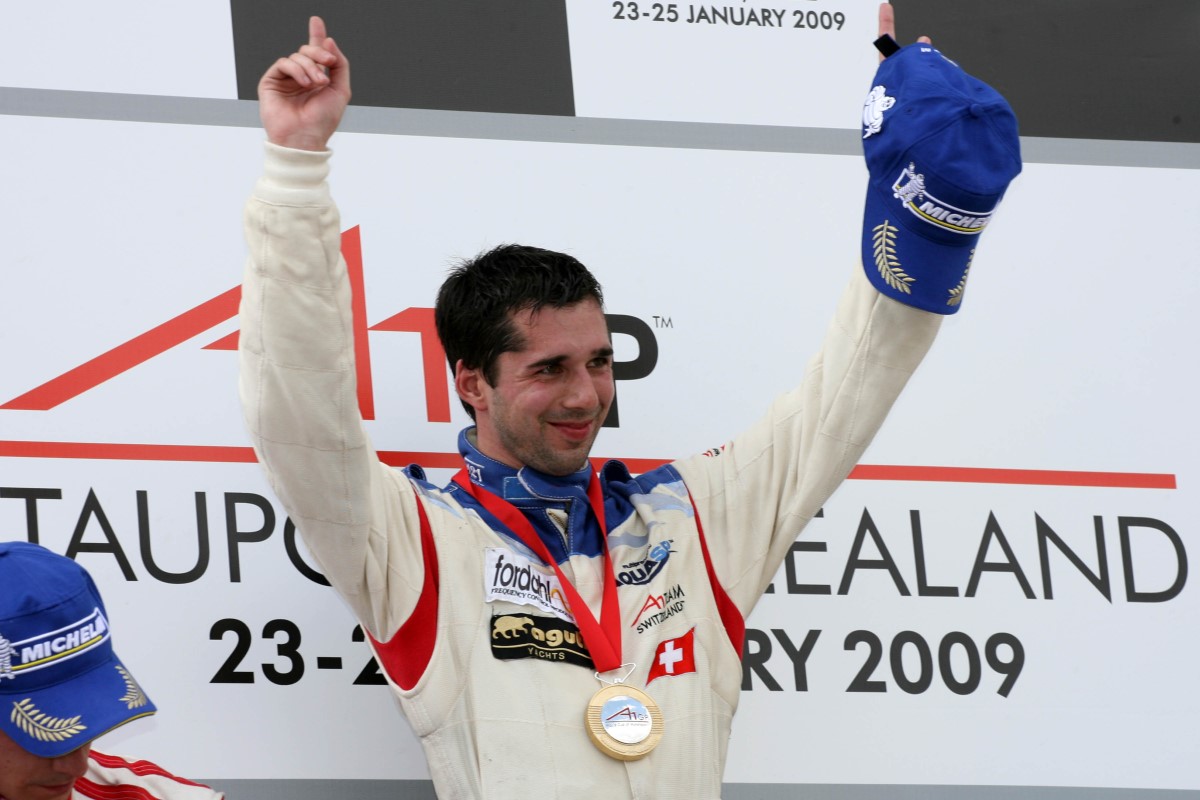 Taupo, New Zealand – A1 Team Switzerland claimed its second win of the season in this afternoon’s Feature race in A1GP Taupo, New Zealand. Neel Jani finished ahead of Ireland’s Adam Carroll and Portugal’s Filipe Albuquerque with Ireland retaining its position at the top of the A1GP championship standing.

Ireland had a clean getaway from pole position but the Netherlands’ Robert Doornbos was slow off the mark from the front row, allowing Portugal to take advantage, and so dropping back to fifth. Albuquerque was right on the gearbox of Ireland as the field headed into turn one, tapping the Irish car and briefly losing momentum allowing a quick-starting Jani to move up from fourth on the grid to second.

Australia’s John Martin made an aggressive start to his Feature race, getting Jackeroo ahead of the Netherlands after first dropping behind Switzerland but remaining in fourth. New Zealand’s Chris van der Drift had a problematic start having to pit with a puncture after a collision with Lebanon’s Daniel Morad. Morad retired in the pit lane, but New Zealand was able to rejoin, albeit a lap down.

By the end of lap one Ireland led from Switzerland, Portugal, Australia, Netherlands, France and Malaysia, Brazil, USA and India.

Ireland began to pull out a small gap at the front, which was 0.874-seconds from Jani by the end of lap four. Carroll continued to record fastest laps while Monaco’s Clivio Piccione capitalized on a mistake from India’s Narain Karthikeyan to take ninth.

On lap eight the first pit stop window opened and the emerald green far was first in the pit lane. A good stop from the Irish squad saw the Celtic Tiger retain the lead, while another great stop from the Australian squad got Martin out closer to the leader. Switzerland pitted but wasn’t able to take the lead, while Portugal stayed out deep into the pit window in an attempt to make up ground. After recording the fastest lap Albuquerque dived into the pit lane, but with Carroll’s new tires working well he rejoined in third place.

On lap 10 Monaco and Brazil were running wheel-to-wheel when the young Brazilian seemingly closed the door causing the pair to touch, with the result being Brazil spinning across the track and Piccione losing his front wing and running off-track.

After the first round of pit stops the order settled and was Ireland from Switzerland, Portugal, Australia, France, Netherlands, Malaysia, India., USA and Great Britain. Ireland now had a comfortable 3.773-second lead over Switzerland.

On his return to A1GP action China’s Congfu Cheng had a spin shortly before Great Britain’s Dan Clarke spun under braking into turn 11 on his race debut for the British team. The 25-year-old kept the engine running and rejoined in fifteenth.

On lap 22, the second mandatory pit stop window opened with Australia being first in this time around. Ireland and Switzerland both pitted on the same lap with the Irish team getting their man away a fraction quicker than the Swiss. However, after Carroll had pulled away from his pit box and looked to have retained his lead the anti-stall system kicked in and halted his progress. The car then stalled and as Carroll got his machine moving again Switzerland took the opportunity to get ahead and snatched the lead of the race. Switzerland, Ireland, Portugal was now the top three after Albuquerque had another clean stop to retain position. China had a problematic second stop with Cheng leaving the pits with the rear jack still attached, resulting in a drive-through penalty a few laps later.

Switzerland had a 1.6-second advantage over Ireland and Portugal was continuing to push, with Albuquerque setting the fastest lap of the race, a 1m 14.898s on lap 30.

On lap 37, Clivio Piccione went off at Turn 11 and beached the Monaco car at the gravel resulting in the Safety Car being deployed. As the field closed back up the scene was set for the final exciting laps of the race. Switzerland controlled on the re-start on Lap 41 as the field made its way through Turn 1 incident-free.

USA’s Marco Andretti moved ahead of Italy to take ninth before Indonesia's Satrio Hermanto spun at Turn 12, closely followed by Malaysia's Fairuz Fauzy, who lost seventh and a solid-points finish at the same time at the same corner. While the action at Turn 12 was going on, Netherlands' Robert Doornbos took advantage and made a move to pass France's LoÃ¯c Duval.

As the checkered flag came out the top three crossed the line only a few seconds apart. An extremely happy Jani took victory for Switzerland, an even more remarkable achievement given that he was rushed into hospital last week with suspected meningitis, and only came back to full fitness today.

Ireland’s points haul means it retains the championship lead with 65 points while Switzerland (52) move up to second ahead of Portugal (49).

“What a weekend in the end," said race-winner Neel Jani. “On Monday I still felt really bad, but I just got better every day with the warm weather in New Zealand, and it looks like the clean, fresh air helped me as well, so that is good.

“The first race was already good, a great pit stop put me up to second, but here coming up from fifth to first was nothing we had ever thought of. I had a great start from fifth to second and I was already next to Adam. I settled for second, but then we had a little problem on the first pit stop as I didn’t really get off well as I had a problem with the clutch, and then the second pit stop was fantastic, very quick from the guys. I saw Adam next to me and heard his engine revving on the limiter and thought there must be a problem, and I just kept on my side then and was able to take him like that. Then I was just able to control the race.

“It was a great, great weekend and a fantastic car. This was the most points we have scored on a weekend this season and so now it is starting to come good for us, but there are still a lot of points needed to catch up Ireland."

Commenting on the first corner tap from Portugal, Ireland’s Adam Carroll commented: “I needed just a little push to get off the line from behind, and Felipe (Albuquerque) gave me that.

“It was all a bit close and quite interesting," he continued. “But everything was going well until the second pit stop. Basically as I left the engine just went. It didn’t stall immediately as to begin with it was okay. Actually the anti-stall system came in, then it stalled completely and I had to bump start it and go again. I don’t really know what happened. I was actually lucky not to lose more places. It was unfortunate but second place is still good.

“I pushed hard and got some decent times in. Then the guys did a fantastic job in the pits for the first stop and we were able to come out with a good gap, which I was maintaining until the second stop where it all went wrong."

Portugal’s Filipe Albuquerque said: “I think the race pace and our speed this weekend was really there, but it was just a question of being in front. It was interesting to see the gaps between us when Adam was leading and I would have liked to be in front to see if I could have gone at the same pace. I need to congratulate Neel for a good start. I could not do much as I was pushing a lot and here you never rest.

“Offline was really dirty, and once I almost disappeared as it was so grippy on the normal track, but if you went off there was no grip. But I think it was just whoever didn’t make a mistake would get third place."

Home favorite Chris van der Drift had a disappointing weekend, ending the Feature race in thirteenth: “The first lap was what gave us the problems during the whole race. We had the anti-stall problem at the start which was unfortunate. Then on the first lap, I don’t know who it was, but someone ran into the back of me. It was unfortunate as after that you can’t really do much when you are a lap down.

“It was just a pity we couldn’t have a better result here for team New Zealand."