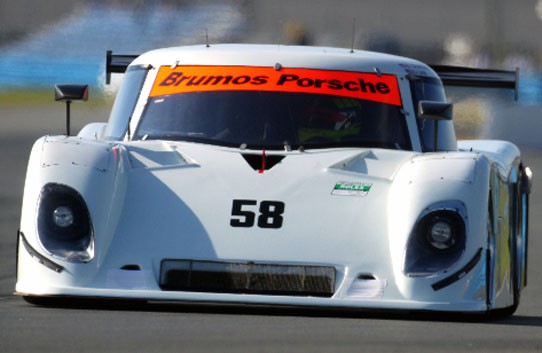 Darren Law and Dominik Farnbacher waited until the final day to set the fastest laps of the "Roar Before the Rolex 24" Grand-Am Rolex Sports Car Series presented by Crown Royal Cask No. 16 at Daytona International Speedway.

Farnbacher waited until the final 30 minutes of the closing session before running a lap of 1:50.881 (115.853 mph) in a simulated qualifying run in the No. 86 Farnbacher Loles Racing Porsche GT3.

Christophe Bouchut, who was quickest in Sunday's combined testing, had the fastest lap for much of Monday morning in the No. 55 Edata Solutions/Supercar Life Racing LevelFive Motorsports BMW Riley prior to Law's fastest lap.

"We've spent a lot of time with this car, and the team has done a good job with setup," Law said. "We've been inching up on it and it's getting there. We're pretty happy with the car. We're close to going racing now. Right now, we're running in race equipment, making sure that everything is working properly.

Michael Valiante had held the quickest lap of the test, set Saturday when he ran a lap of 1:41.760 (125.943 mph) in the No. 6 Michael Shank Racing Ford Riley he shares with John Pew, AJ Allmendinger and Ian James.

"We had a few problems during this test, but it looks like at the end of the test it looks like we've sorted out the small issues and we've set up the car quite well," Enge said. "We've still got a ways to go before the race, but the car looks good and we feel very positive. I still need a few more laps to be comfortable, but it's working well. It's not perfect yet, but I know we will work hard and we will be ready before the race and we will be strong."

"We had a good performance, and everything worked very well," Farnbacher said. "On our fastest lap, our setup was like what it would be for qualifying, and it worked pretty good. Also, we put new tires on and we wanted to see what the difference would be between old and new tires. It was not really a big gain. The Pirelli tires are very good and very consistent. I also did a long run to see how the tires would perform through the stint, and the Pirelli tires were very consistent. We are quite happy to have such good lap times."

"It's nice to get back in a race car, but more than anything, this race is something special to me and something I admired as a kid growing up," Johnson said. "I like being involved in it, with the racers and teams that are all involved in the Rolex 24.

"This is different for me," Johnson added. "This car and the way we use the brakes are very different from what I'm used to, so I'm working very hard to be more committed in the braking zones. Practicing driver changes is very different, and I certainly improved from my first stop to the fourth time I tried it."

Earlier Monday Penske Racing announced its driver lineup and sponsorship for the Rolex 24 At Daytona. Romain Dumas, Timo Bernhard and Ryan Briscoe will co-drive the No. 16 Crown Royal Cask No. 16, with Dumas and Bernhard continuing in the car for the remainder of the Grand-Am Rolex Series season.

"Going into the Rolex 24, we have two goals as a team," said Bernhard, who won the GT class in the 2002 Rolex 24 and then captured overall honors for TRG the following year. "Sure, we want to win the race because it's an outstanding race. But on the other hand we are looking for a good start to the season for the whole year, so we can fight for the championship."

Practice for the Rolex 24 gets underway at 10 a.m. on Thursday, Jan. 22, with qualifying that afternoon beginning at 3:45 p.m. For additional information, please visit www.grand-am.com.