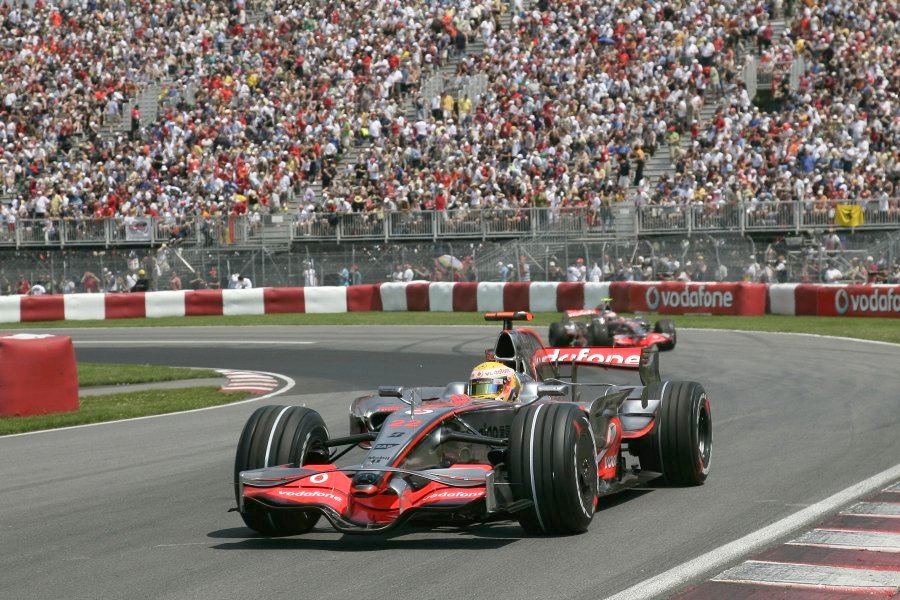 McLaren driver Lewis Hamilton took pole position here in Montreal this afternoon, by an amazing six tenths of a second on Robert Kubica, who will join the young Brit on the first row of tomorrow’s grid. Kimi Raikkonen and Alonso will share the second row while Rosberg will start from row three, alongside Felipe Massa, who finished a disappointing sixth.

In winning the pole Hamilton ended Ferrari's run of pole positions. The McLaren driver – who claimed his first pole and win at the Montreal track a year ago – topped Q1 and Q2, and held a comfortable provisional pole after the first Q3 runs.

He was then briefly deposed by Robert Kubica, but improved further with his second lap to beat the BMW to pole by a commanding 0.6 seconds.

Kubica held on to the outside front row spot – a remarkable result after his horrifying crash at the track twelve months ago.

Ferrari could only manage third and sixth places. Kimi Raikkonen was nearly a second slower than Hamilton in third place, while Felipe Massa – who had taken pole for the last two GPs – was pushed back to the third row by Fernando Alonso and Nico Rosberg.

MCLAREN-MERCEDES
At the scene of his debut pole and victory last year, Lewis Hamilton utterly dominated Montreal qualifying; he was quickest in both Q1 and Q2, and his margin over fellow front row sitter Robert Kubica in Q3 is an incredible six tenths, although Kimi Raikkonen would have come close had he not struggled so much through the crumbling hairpin. Heikki Kovalainen is seventh, 1.2 seconds slower than his teammate. "The traffic meant I couldn't get into a proper rhythm so I'm a bit annoyed with myself," he said.

BMW-SAUBER
As is quite often the case in 2008, BMW-Sauber seemed nowhere in the practice session, but Kubica pulled a great lap out of the bag to be P2 on the grid — albeit a huge six tenths adrift the pole sitter. Nick Heidfeld's qualifying was at least better than his Monaco nightmare two weeks ago, and he nearly matched Kubica's pace in the low-fuel Q2 phase, but he is ultimately only P8 on the grid. "It is a start, but I still have a lot of work to do," he acknowledged.

FERRARI
Ferrari could not quite keep up with Hamilton's McLaren in the first phases of qualifying, but the vast deficit in Q3 – 8 tenths in the case of Raikkonen, and a huge 1.2 seconds for Felipe Massa – is partly explained by the F2008's apparent inability to negotiate the crumbling hairpin. "It's a real shame because I could have fought for pole," said Raikkonen, P3, who lost a huge amount of time in the final sector on his last effort and slammed the situation as a "joke" in the post-session press conference.

RENAULT
Nelson Piquet looked quick in the morning, but qualifying was a different story; nearly a full second per lap slower than teammate Fernando Alonso in both Q1 and Q2, when he dropped out for just 15th on the grid. "I'm still struggling a bit with this track," said the Brazilian. Alonso qualified a very impressive fourth, despite Renault's pitwall computers suffering a total blackout, and he admitted in the team's post-session media statement that he is eyeing "big points" in Sunday's 70-lap race.

WILLIAMS-TOYOTA
In the crash-affected morning practice session, Nico Rosberg finished atop the timesheet, but he then confirmed his form in qualifying with fifth on the grid, and one more tenth would have put him third. Kazuki Nakajima was fifth in the morning but did not make it through to 'Q3' in qualifying, even though his pace is only a couple of tenths shy of his teammate.

HONDA
Jenson Button's weekend must be the least competitive of his entire grand prix career; 19th in morning practice and again in qualifying, although the latter was the result of a gearbox problem that condemned him to the garage. Rubens Barrichello has made a much better fist of the event, and he also made good use of his vast experience when the circuit was breaking up, taking the sister RA108 all the way through to Q3.

RED BULL-RENAULT
Mark Webber was quick enough for P5 in the low-fuel second phase of qualifying, but he could not take part in Q3 after sliding on the debris of the crumbling track and into the wall on his in-lap, moving him to sarcastically declare that "motocross bikes" rather than F1 cars might be required on Sunday. David Coulthard has been significantly off Webber's pace all weekend and is 13th, and he criticized Sebastien Bourdais and Piquet for not "playing ball" in the Q2 traffic.

TOYOTA
Jarno Trulli's notable run of spins continued into qualifying, when he was outqualified by his teammate Timo Glock, but – for the first time in 2008 – neither made it into the top ten. "We got something wrong and we have to investigate," said technical boss Pascal Vasselon.

TORO ROSSO-FERRARI
Morning crash excluded, Sebastian Vettel has been on the pace all weekend, but he could not charge for a grid position because the impact had damaged the STR3's monocoque and could not be repaired in time. "This year the rules ban spare cars, so it meant no qualifying for me today," the German, who will start the race from pitlane, said. By quite a large margin, Sebastien Bourdais failed to progress through Q1, and he will start right at the back because his gearbox had to be changed following his own morning crash. "For me this is one of the worst days of my career so far," he said.