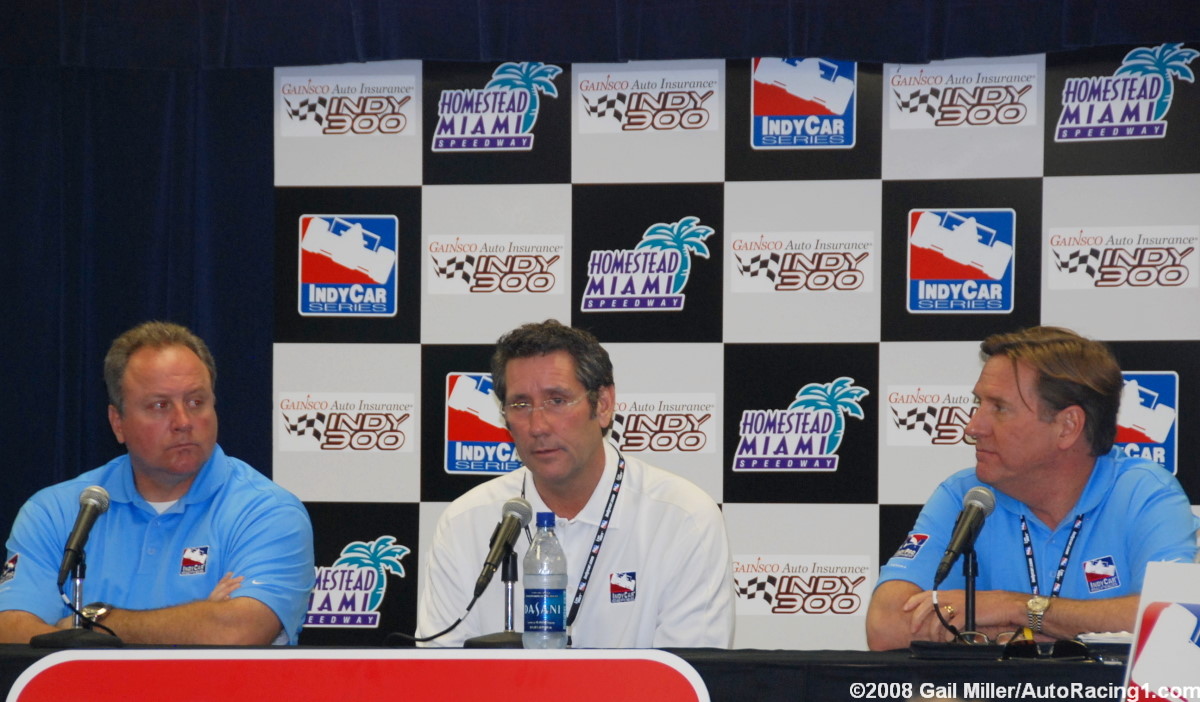 Indy Racing League's top brass – Tony George, Brian Barnhart and Terry Angstadt met the press Friday afternoon in Homestead Florida to answer key questions with regard to the unified open wheel racing series and their answers give us some good insight into the future of the league.

Tony George opened the meeting by saying it's been a hectic 30 days since the announcement of the unification. The logistics it has taken to get equipment to the transitioning Champ Car teams have been a big mountain to climb but he feels things will settle down by May and the Indy 500. He thanked everyone on both sides for the efforts they made in making it all come together.

We asked Tony if he thought more cars might come over from Champ Car when the announcement was made. His response, " I kind of assumed 14 or so was a very real possibility. I don't know where we would be today if that many had actually come. Where it settled out at – 8, 10 – that seems to be a manageable number to get the season going.

"But we would have really been hard-pressed I think to come up and even do a reasonable job. So I guess to that extent, I wish everybody that wanted to be here could be here. Derrick Walker comes to mind. Certainly wish the economy around this sport was booming from the very announcement so that guys like Gerry Forsythe would find a sponsor and be here.

"I guess it would have been an interesting challenge to have, to try and come up with more equipment. And we possibly could have. I think, you know, I've still got a car available. We could tighten our belt and try to get by running two. I do know that, you know, beyond May, if anybody wants to acquire more equipment, Dallara can still build four (chassis) a month beginning in May.

"I mean, we'll slowly catch up. But it's getting there.

"You know, this 8 or 10 has been a good number to get transitioned, though."

Tony George told us that he wished it had come together earlier. He said there were talks as early as last fall, then it appeared Champ Car would go forward in 2008 and they went into the holidays assuming that would be the case. Then in February the Champ Car side made some decisions that enabled the unification to happen. Although George didn't say it, we hear in February Kevin Kalkhoven decided he was no longer going to continue the series without a business plan that met his satisfaction so he shut it down. Too bad that didn't happen last fall because that would have made the unification much better for everyone.

Brian Barnhart said that the NHLR team will get more test time at Sebring this coming Tuesday because they were not able to make the Sebring test. That will help them be ready for St. Pete next weekend.

All the drivers coming over from Champ Car, except for Oriol Servia and Bruno Junqueira, will be considered rookies because "we are largely an oval series and the other drivers had 5 or less oval races under their belt and will, therefore, be eligible for the Rookie of The Year (ROY) title." There will be 9 drivers competing for ROY honors.

"There has been a misconception that these cars are 100% throttle high downforce cars and therefore, easy to drive, and that's not the case," said Barnhart. The transitioning teams have a daunting task ahead of them. The teams that are good in this league know they need good mechanical grip in traffic where the aerodynamics don't work as well." The transition teams are going to have to figure that out.

Barnhart expects 26 cars for the remainder of the season, except for Indy which will have 33. Because there was not enough time to repair Graham Rahal's car damaged in a crash in testing at Homestead a few days ago, there will be 25 this weekend. Rahal will get no points for this weekend since he did not qualify for the race.

"It was a proud moment this morning when I looked down from race control and saw a pit lane full of race cars," Barnhart said.

If more cars come in, as is expected later in the year, we could see NASCAR-style bumping at three race tracks that can only accommodate 26 cars in the pits – Milwaukee, Iowa and Richmond.

Barnhart explained the new weight rules in effect for this season. Essentially the drivers will be divided into 5 groups, A thru E. Groups A, B and C will add weight to their cars. Group A (lightest drivers) will add the most weight, B the next most, and so forth. Group D will add or subtract no weight and Group E will remove weight from their cars. This will make all the cars with drivers almost the same weight and therefore make the weight differences almost negligible.

The drivers will be weighed just once before the season starts.

As for the schedule, the 2008 IndyCar Series Fan Guide lists Edmonton on Saturday July 26th at 5:00 PM on ESPN as we previously rumored so that looks like 'fact' and it should also be a points paying race. They are not yet sure about points for the Surfers race, which will run on Sunday October 26th, because Chicagoland has a contract to be the final points paying championship race for 2008. Terry Angstadt said it will either count as the first points paying race of 2009 or be included in a special 2008 international points championship that would include, Indy, Japan, Edmonton, Surfers and perhaps Long Beach and would include a cash bonus prize to the champion.

They expect the sanctioning agreements for Edmonton and Surfers to be signed in about 10 days time.

As for 2009 and beyond Tony mentioned some desire to have an equal mix of 6-6-6; six ovals, six road courses and six street races, but it will probably end up being 20 to 22 races. They talked about Mexico City and Toronto being in the mix to make the series a bit more international. And it might not be on the streets of Toronto as I hear through the grapevine that a group looking to build oval tracks around the world has approached Tony about an oval race in eastern Canada. Europe is not in their plans at this time.

As for when the 2009 schedule will be announced, Tony George said, "We always shoot for May but historically we don't get it out until September."

It sounded like the rumored DIRECTV presenting sponsorship could have been made this weekend but the lawyers are still going over wording of the contracts so it probably will not happen this weekend I hear through the grapevine.

Look for Tony Cotman to be the race director for the Long Beach race, the final race to be run with Champ Car. Tony George, Brian Barnhart, Terry Angstadt and some of their staff will make the overnight trip from Motegi to Long Beach mostly to observe and plan for 2009. Champ Car staff will run the show.

Barnhart told us that they have not set an exact date for the new car, but that it would be most likely 2010 or 2011. In no way will it be 2009 because the transitioning teams have had to invest so much in new cars it would be unfair to use them just this year. As far as what the new chassis will be, that depends a lot on what the engine formula is. They will also take aesthetics into consideration and what the ART school program comes up with.