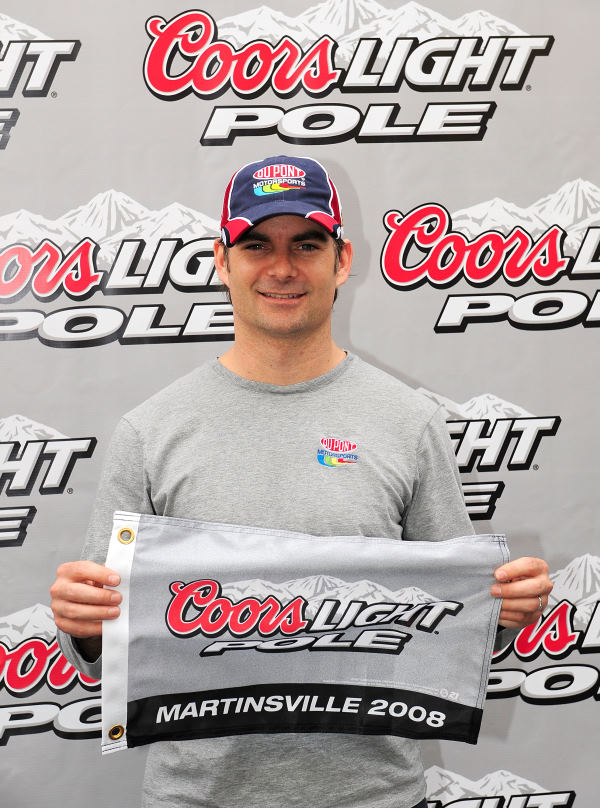 Jeff Gordon continued his domination of the 0.526-mile paperclip shaped Martinsville oval by winning the pole for Sunday's NASCAR Sprint Cup race in his DuPont Chevy. Denny Hamlin was 2nd in his Joe Gibbs Toyota. Aric Almirola, David Ragan and Jamie McMurray rounded out the top-5.

Looking to get his season back on track, Gordon was happy to win the pole although for the race it means absolutely nothing. Back in 14th place in the series standings, the 4-time champion is hoping a return to Martinsville will get his season turned around.

“We’ve been close to poles, we’ve won poles here, but rarely have we put a whole lap together at both ends of the race track the way we did today," Gordon said. “It impressed me, I’ll be honest, to run that type of a lap. It tells you the great job the crew did today."

Joining Gordon on the front row is the Toyota of Denny Hamlin. The Joe Gibbs Racing driver posted a lap of 19.77 seconds at 95.757 mph.

“It was a good lap for us," Hamlin said. “I missed my marks on my first lap, and that typically was about one-tenth faster than what our second laps were.

“I felt like we were good. It was just a little driver error there and had to kind of regroup in that second lap and kind of pull something at least salvageable together, and it was good enough for where we ended up. It just tells us we have a car that is that versatile is going to be good for us on Sunday."

The pole pulls Gordon within five of Cale Yarborough for third on the all-time list.