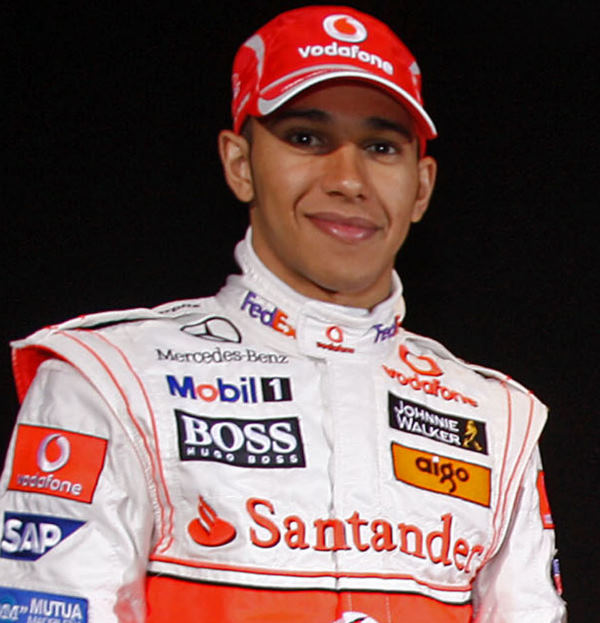 Lewis Hamilton dominated the Australian Grand Prix in his McLaren-Mercedes, leading all but 5 laps, to take the first race of the 2008 season, while a chaotic race ensued behind the young British driver. Nick Heidfeld was second in his BMW Sauber and Nico Rosberg was third in his Williams-Toyota.

Fernando Alonso finished fourth in his Renault, followed by Heikki Kovalainen in his McLaren-Mercedes in fifth, Rubens Barrichello in the Honda in sixth, Kazuki Nakajima in the Williams-Toyota in seventh and 4-time Champ Car champion Sebastien Bourdais in his F1 debut finishing in the final points paying position in the Toro Rosso-Ferrari – despite retiring with an engine failure three laps from the finish while running 4th ahead of Alonso and Kovalainen.

Just seven drivers finished the 58 lap race, which was packed with drama from beginning to end. Hamilton managed to steer clear of the carnage going on behind him, enduring the near 40 degree heat and prevailing by 5.4 seconds in his McLaren.

Heidfeld also drove an excellent race, avoiding the trouble and getting himself a well-deserved eight points after a disciplined drive, while Rosberg did similar, pushing himself onto the podium.

But behind those three it was all action as Fernando Alonso and Heikki Kovalainen fought out fourth and fifth right until the final lap. The Spaniard would cross the line first after passing the second McLaren driver with a lap remaining.

Rubens Barrichello finished sixth after a dramatic race where he not only ran over one of his own pit crew but also endured a drive through penalty. He was later excluded from the race after leaving the pit lane when the lights were red.

Kazuki Nakajima in the second Williams picked up three points in seventh, but not before a bizarre collision with Robert Kubica under the safety car, which saw the Pole retire when in a good position late in the race.

The heartbreak story was Sebastien Bourdais, who drove an utterly brilliant debut race in the Toro Rosso to be fourth with three laps remaining. But his engine gave up on him and he had to retire. He did get two points for seventh.

Seconds earlier Kimi Raikkonen, who seemed to spend most of his race running off the track, also pulled up, meaning Ferrari picked up just one point after Felipe Massa's race ended on lap 29.

The most dramatic moment of the day came when Timo Glock ran wide and hit a bump off the track which saw his Toyota fly into the air and then disintegrate when he hit the ground.

David Coulthard came off second best with a collision with Massa, in an accident which contributed to the Brazilian's eventual withdrawal and the Scot's poor humor.

Takuma Sato, Nelson Piquet, Jarno Trulli and Adrian Sutil all withdrew during the course of the race as did Mark Webber, Jenson Button, Anthony Davidson, Sebastien Vettel and Giancarlo Fisichella, who were all involved in incidents during a hectic first lap.

Hamilton's victory is his fifth and comes just 12 months after his debut at Albert Park.

It was the fifth Grand Prix victory for Hamilton.

After the first of 18 Grands Prix, Vodafone McLaren Mercedes lead the Constructors’ World Championship with 14 points ahead of BMW Sauber and Williams Toyota with 8 points each. Lewis took the lead in the drivers’ ranking with 10 points ahead of Heidfeld (8) and Rosberg (6).

MCLAREN-MERCEDES
It was a walk in Albert Park for Lewis Hamilton, who after his 5.4 second victory over BMW's Nick Heidfeld insisted that he could have gone quicker. "There is a long way to go and we never underestimate our competition," a cautious Ron Dennis said, referring to Ferrari's disastrous day. Heikki Kovalainen looked on track for second but was shuffled down to fifth when the timing of the last safety car spoiled his planned pit stop, and after passing Fernando Alonso's Renault he let the Spaniard back through when he accidentally hit the pit lane speed limiter.

BMW SAUBER
Nick Heidfeld finished second, and after qualifying second, teammate Robert Kubica was running fifth on a compromised strategy when Kazuki Nakajima – the Williams rookie who was penalized ten positions on the Malaysian GP grid for the incident – crashed into him.

WILLIAMS-TOYOTA
A delighted Nico Rosberg's well deserved podium is the first in his career, while Nakajima was the last car to greet the checkered flag but he still collects three points due to the emaciated field, putting Williams at second place in the championship so far.

RENAULT
Nelson Piquet's atrocious debut weekend got even worse when he incurred terminal damage on the first lap, while Alonso made the most of the Australian chaos with fourth place. "We must improve our level of performance in qualifying and our pace in the race," he said.

TORO ROSSO-FERRARI
The team would not confirm that Sebastien Bourdais' problem was the third Ferrari engine to fail on Sunday, but it is a fact that he missed what would have been fourth place on debut. Amazingly, although his smoky STR2 was parked on the verge, he was still classified and collects two points. Sebastian Vettel got a terrible start and exited the race in the turn one melee.

FERRARI
After arguably winning the 'winter' championship, Ferrari had one of its worst showings in recent history, as Kimi Raikkonen – following a couple of race-ruining driver errors – scraped a lucky point after his engine failed. Felipe Massa survived the David Coulthard shunt, and was lying seventh when his own V8 gave up. "The engines are being sent immediately to Maranello for analysis," said Stefano Domenicali, whose debut as team boss could not have been worse. World champion Raikkonen remained upbeat, knowing that the F2008 is still perhaps the fastest car in the field. "We are capable of recovering from far worse situations than this," he said.

TOYOTA
Timo Glock left Albert Park wearing a bandage on his left wrist after his huge air-time and crash landing at the exit of turn twelve. Jarno Trulli was furious when he also had to retire with a battery that fried in the Aussie heat.

SUPER AGURI
If the Japanese team was short on spare parts before the red lights went out, it is now in serious trouble, because Takuma Sato stopped on track with an unspecified failure and Anthony Davidson found himself the meat in a formula one sandwich on lap one.

RED BULL-RENAULT
A furious Coulthard turned the live airwaves blue after his terminal crash with Massa, while unlucky local Mark Webber was one of the pieces of bread in the Davidson sandwich.

FORCE INDIA-FERRARI
Giancarlo Fisichella's car nearly rolled over as he crashed out in the turn one chaos, and it is understood that he was referring to Glock and Piquet when he blamed some 'kamikaze' rivals. Adrian Sutil's car, hurriedly built overnight by the team after Saturday's incident cracked his race chassis, stopped with a failure of the hydraulics system. "The positive is that we have another event in just one week's time where we can try again," said team owner Vijay Mallya.

HONDA
Rubens Barrichello's sixth at the checker was cancelled by the stewards, because he drove through a red light at the end of pit lane. At the same time, his crew was limping back into the garage, after the lollipop man let the Brazilian driver go when the fuel hose was still attached. On the bright side, he kept Raikkonen's Ferrari at bay for 19 laps. Teammate Jenson Button's suspension got destroyed against Vettel's car in the first lap melee.