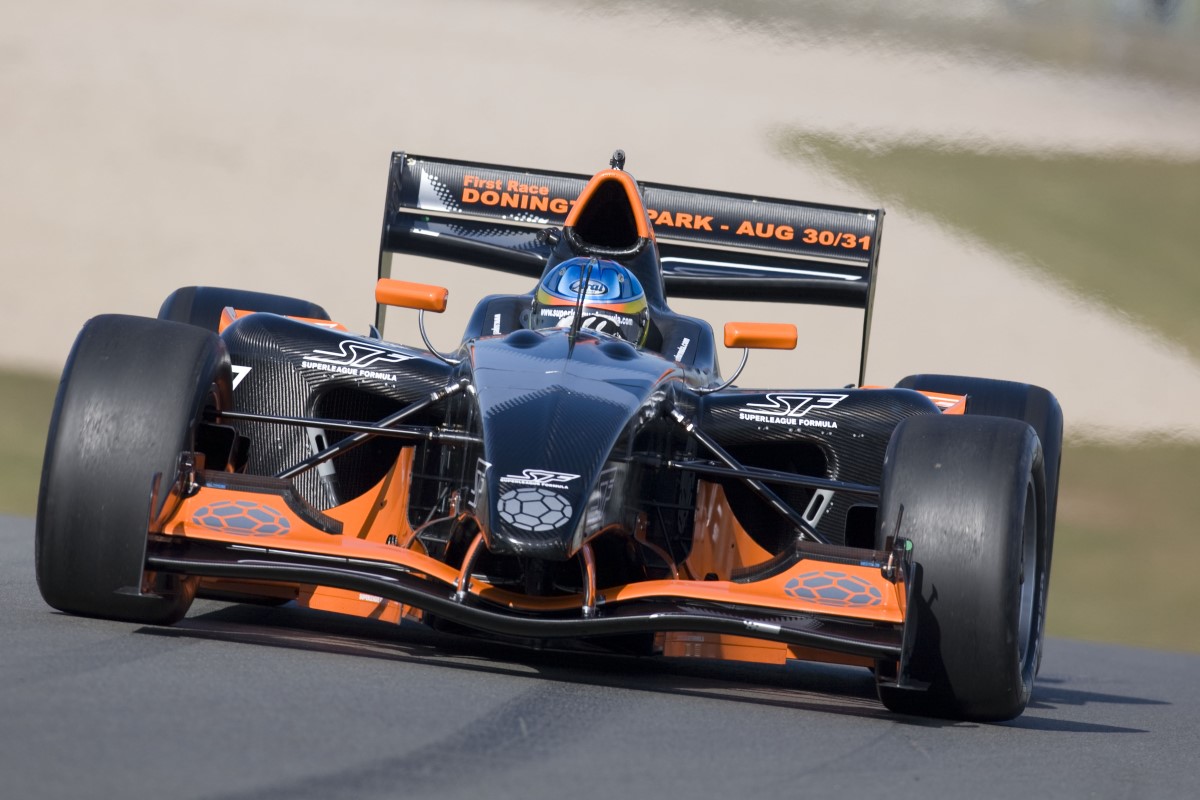 Apart from its motor sport history, Donington Park is also a popular concert and festival venue, but today, the UK circuit welcomed a new brand of beautiful music for the first time – the V12 power of the new Superleague Formula championship.

The Elan Motorsport Technologies-built, Menard Competition Technologies-powered prototype hit the track for the first time with Frenchman Bruce Jouanny at the wheel.

Making its debut at Donington was a fitting start for Superleague Formula – the championship will also kick off its inaugural season at the Derbyshire venue on August 30/31 this year.

"We have been able to put some good miles on the car and get everything up to temperature and up to speed," said Jouanny.

"At the end of the day I was able to do a longer run where I could really start to put the tires under load and push the engine harder, which was great.

"The engine has a tremendous amount of torque – we are down on top end power at the moment, but this is the first phase of the engine development and we are working through mapping options – that is what we are here for.

"The Elan chassis responds to changes really well, you can really feel every adjustment and it has an enormous amount of downforce – the track was pretty cold and slippery but you could really lean on the lateral grip.

"The braking is also very impressive. The carbon brakes are very strong and the V12 Menard powerplant offers a lot of engine braking – that will be one of the things which the drivers in this championship will take a while to get used to."

Jouanny, championship Technical Director Steve Farrell and Hitech Racing are charged with developing the engine/chassis combination over the next few months before teams accept delivery of their cars in June.

A total of six, three-day tests are planned with the next session scheduled for the Monteblanco circuit in Spain.
Superleague Formula will feature the colors of the world's leading football clubs adorned aboard the Elan-chassis/Menard-engine combination.

"We are very early in our development program but this week has gone pretty much to schedule – we are very pleased," said Superleague Formula Technical Director, Steve Farrell.

"There are a lot of detail items to sort through, but the major functions of the car – engine running, gear change, basic handling – that is all going remarkably well considering the point at the development cycle that we are at.

"All the technical partners and the guys at Hitech Racing have done an incredible job – it has been a great effort from everyone.

"Lots of late nights and lots of hard work, but it is a good example of the teamwork that will play an important part in the development of the car over the next few months."

Fresh from a major launch for Corinthians in Brazil, Superleague Formula will next head to Turkey for the unveiling of the Galatasaray SK entry tomorrow.

Three further club announcements are scheduled in the upcoming weeks, while negotiations are currently being finalized with six additional teams to complete the 20 car entry.