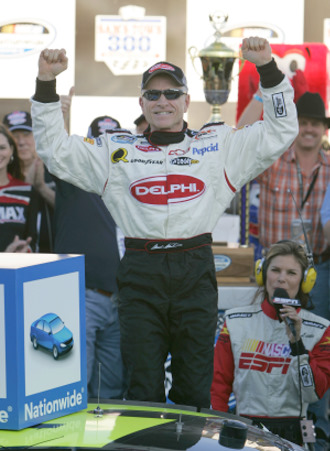 Before Mark Martin allowed himself to celebrate his victory in the NASCAR Nationwide Series Sam's Town 300 Saturday at Las Vegas Motor Speedway, he felt compelled to offer his condolences to a former teammate and a current one.

Martin pulled away from Greg Biffle in a green-white-checkered-flag restart that took the race two laps beyond its posted distance of 200 laps and extended his series record to 48 career victories, but the driver of the No. 5 Chevrolet was subdued after triggering a wreck on Lap 195 that eliminated Carl Edwards, his former Roush Fenway Racing teammate, and Brad Keselowski, his teammate-for-a-day at JR Motorsports.

As Edwards and Keselowski raced side by side toward the stripe on Lap 195, a tap from Martin turned Edwards' Ford into Keselowski's Chevrolet, sending both cars spinning into the frontstretch wall.

That brought out the record 13th caution of the race and sent the event into overtime. After the final restart, Martin beat Biffle to the finish line by .586 seconds. Clint Bowyer ran third, followed by Kevin Harvick and David Stremme. Dario Franchitti, Mike Wallace, Patrick Carpentier, Brad Coleman and David Ragan completed the top 10.

In a war of attrition, it paid to be running at the end, as only 14 cars finished on the lead lap.

"I've got to apologize before we do any celebrating," Martin said in victory lane. "I hate for that to happen. I didn't intend for it to turn out that way. But I couldn't stop it, once it started. I feel real bad for Brad, because he was so close to getting his first victory."

Edwards was tantalizingly close to the victory, too, before Martin tapped his bumper and inherited the lead on Lap 196.

Rick Hendrick, who partners with Dale Earnhardt Jr.-owned JR Motorsports in the Nationwide Series, watched as one of his cars started the wreck that took out the other.

"That's your worst nightmare when you've got multiple cars on the track," Hendrick said. "It's bound to happen sooner or later."

The fireworks at the end came long after several of the best cars in the field fell by the wayside.

For the third straight week, Tony Stewart had the dominant car, but unlike the previous two Nationwide races — at Daytona and Auto Club Speedway in Fontana, Calif. — Stewart didn't win at Las Vegas. On Lap 138, his car jumped to the right after contact with David Reutimann's Toyota, and the two Camrys spun in tandem into the Turn 3 wall.

Kyle Busch started from the back of the field after a wreck on his second qualifying lap forced him to go to a backup car. Busch made a ferocious charge to the front and took the lead after a quick pit stop on Lap 63. He was running second to Stewart on Lap 103 when a blown right front tire sent his No. 18 Toyota into the outside wall at the end of the backstretch.

That ended Busch's bid to become the first driver to lead all three of NASCAR's top touring series at the same time; he retired from the race and finished 31st, but Busch will start from the pole in Sunday's UAW-Dodge 400 Sprint Cup event.

Busch and Harvick leave Las Vegas tied for second in the Nationwide points standings, 42 behind Stewart, who finished 27th.

Despite losing a lap for an unscheduled pit stop to replace a cut tire, Jeff Burton worked his way back to the lead lap and was overtaking Martin for the top spot on Lap 158 when the engine in his No. 29 Chevrolet expired.