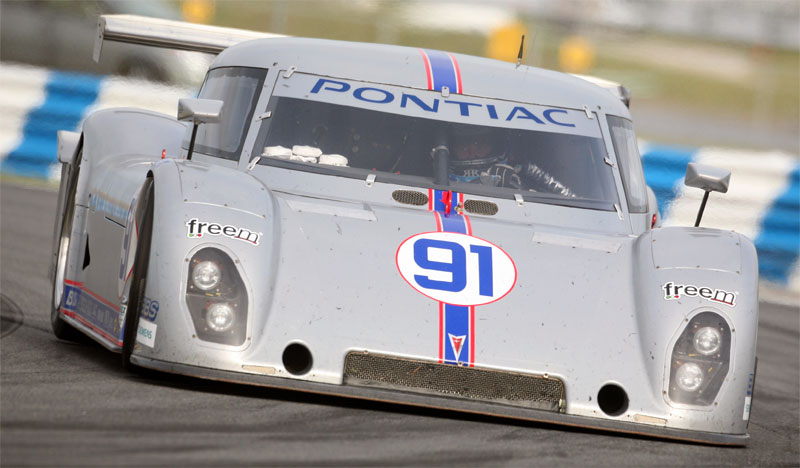 The Grand-Am Rolex Sports Car Series presented by Crown Royal Cask No. 16 completed a successful January Test Days on Sunday, setting the stage for the 46th running of the Rolex 24 At Daytona Jan. 25-27 with three days of on-track testing at Daytona International Speedway.

Johnny O'Connell topped the Sunday afternoon time charts on the third and final day of the test, circulating the 12-turn, 3.56-mile infield road course in 1:42.396 (125.194 mph) behind the wheel of the No. 91 Riley-Mathews Motorsports Pontiac Riley.

"I drove the car first last night (for the night practice), and I loved it," said O'Connell, who had driven a Daytona Prototype only once prior to this weekend. "When I was in the car, I think we were third quick. Then this morning they made some changes, and I didn't like the car as much so to be able to get the car back to where it was very comfortable and easy to drive is a good thing."

O'Connell will be joined for the Rolex 24 by series regulars Marc Goossens and Jim Matthews and IndyCar Rookie of the Year Ryan Hunter-Reay. O'Connell makes no secrets about his goals for the race.

"When I was talking to my bosses at GM, they really wanted me to run the Pontiac GXP.R in the GT class," O'Connell said. "I told them, if there was a good prototype team and we had a shot at winning, I'd really like that opportunity. When Bill Riley talked to them and said, yeah, we'd like him, then that was a cool deal for me."

Penske-Taylor Racing's Ryan Briscoe turned the second quickest lap of the weekend with a 1:41.277 (126.544 mph) in the No. 9 Toshiba Pontiac Riley, a collaboration of Wayne Taylor Racing and Penske Racing. Briscoe will drive with IndyCar teammate Helio Castroneves and NASCAR star Kurt Busch during the Rolex 24.

Sylvain Tremblay turned the GT class fastest lap on Sunday in the No. 70 SpeedSource Mazdaspeed Mazda RX-8, posting a time of 1:51.462 (114.981 mph). Tremblay, also the team principal, will drive the No. 70 machine with David Haskell, Nick Ham and Raphael Matos.

"We had a pretty good game plan coming in," Tremblay said. "We stuck to that game plan, but luckily all of the Mazdas went fast – not just us. I'm just really proud of the effort put forth by the entire SpeedSource MazdaSpeed team."

Tremblay also said the SpeedSource machines will have a distinct, new look for the Rolex 24.

"We have a pretty significant press announcement at the Detroit International Auto Show next Monday that will announce our new partner in the Grand-Am Rolex Series with Mazda," the SpeedSource boss said. "It's a big-time sponsor, and we're really proud of what it will mean to us and how our cars will look."

Seventeen-year-old Robert Thorne was among those "other" fast Mazda RX-8 machines. Thorne posted the fastest GT time of the weekend on Saturday afternoon, taking advantage of the draft on Daytona's banking and a lightning-fast trip through the infield section to post a time of 1:50.617 (115.859 mph).

Thorne's time was more than one-half second quicker than the 1:51.139 (115.315 mph) posted by the No. 15 Blackforest Motorsports Ford Mustang Cobra GT in Saturday's night session. The Blackforest machine was piloted this weekend by David Empringham, Tom Nastasi and Jean-Francois Dumoulin. The trio will be joined in the Rolex 24 by Boris Said.

Unlike the first two days of testing, the Grand-Am KONI Challenge Series saw fresh faces and different machines atop the time charts on Sunday.

In the Grand Sport (GS) division, Craig Stanton put the No. 83 BGB Motorsports Porsche 997, shared with Alex Barron and Dan Selznick, atop the time charts with a lap of 2:01.133 (105.801 mph). The No. 60 Rehagen Racing Ford Mustang GT driven by Hugh Plumb and Mike Canney posted the fastest laps on both Friday and Saturday.

Trailing the No. 83 machine Sunday were the No. 5 Blackforest Motorsports Ford Mustang GT driven by Empringham, Nastasi and Valerie Limoges, and the No. 46 Fall-Lines Motorsports BMW M3 driven by Mark Boden and Steve Jenkins.

In the Street Tuner (ST) division, the No. 51 Brass Mitchell Racing Mazda RX-8 co-piloted by Tony Rivera and Arthur Brass, lapped the track at 2:10.515 (98.196 mph). The previous two days of the test saw ICY/Phoenix Racing atop the standings with David Rosenblum and Andrew Aquilante in the No. 141 Subaru Legacy on Friday and Chuck Hemmingson and Kristian Skavnes in the No. 111 Subaru Legacy on Saturday.

Behind Rivera and Brass on Sunday were Jamie Holtom and Eric Curran in the No. 01 Georgian Bay Motorsports Chevrolet Cobalt and Ian Baas and Stephen Hooks in the No. 171 APR Motorsport Volkswagen GTI.

"I'm used to driving pretty good cars, and it's a treat to drive a Daytona Prototype," Bell said. "Roger (Schramm) told me I should come out some time and drive it, and this weekend was the opportunity for me to do it."

The drive began with some difficulty on Saturday night, as Bell climbed into the cockpit for his first time in the Rolex Series machine.

"I didn't know the car at all well, and I was very frustrated because of the gearbox," Bell admitted. "It was a sequential, and I hadn't drove that since I drove a Ferrari 333 back in 1990-something. I couldn't get the car to go down to fourth, to third, to second, to first, so I brought the car in and had them explain it. They did, and I felt like an old woman out there. But it did get a lot happier out there, and I had a good time doing it. The car is a delight to drive, and I know Justin and Roger were very happy with it last season."

The No. 12 machine is the car that will be piloted for the full Rolex Series season by Bell's son, Justin Bell, and Roger Schramm. Bell and Schramm confirmed Sunday they will be joined in the Rolex 24 by Tonis Kasemets. The team's fourth driver has yet to be officially announced, but three-time winner Derek Bell could aim for a fourth Rolex 24 crown.

"I'll state the very obvious: Derek Bell is a legend, and one of the most successful drivers in the entire history of the sport," Schramm said. "For our team, it is an honor and a privilege for him to consider racing with us."

"Bill is on for the season and we are very pleased," Southard said. "It's going to work for us this year. Bill is a very talented driver, and believe me, I've seen a him on the track this weekend and his talents are considerable."

Lester, who got his start in sports cars before making a move to the NASCAR Craftsman Truck Series and a variety of Sprint Cup and Nationwide Series rides, will join Lewis beginning with the Rolex 24 At Daytona.

"I am excited to be back here in essentially my roots," Lester said. "I started racing sports cars at the amateur level in the mid 1980s. I've had a lot of great experiences and opportunities, but I've always felt comfortable in racing a sports car. It's like riding a bike. I now have the good fortune of joining this team with Shane. One of the things I've realized this weekend was that Shane and I are very similar in what we want out of the car. Our driving abilities tend to complement each other."

In what will be his fourth career Rolex 24 start, Johnson is hungry to win the prestigious sports car race co-driving the No. 99 Lowe's/GAINSCO/Bob Stallings Racing Pontiac Riley with teammates Alex Gurney, Jon Fogarty and Jimmy Vasser.

"I'm here strictly to win," Johnson said. "I will have fun during the event and all that but this team is a championship-winning team, a race-winning team, and we're here to win the race."

Johnson is co-driving for one of the pre-race favorites to win the Rolex 24. The No. 99 car won the 2007 Daytona Prototype title with Gurney and Fogarty, sat on the pole for last year's Rolex 24 and captured the Brumos Porsche 250 last July at DIS.

"The first two years, it was more for fun," Johnson said of his first two Rolex 24 starts in 2004 and 2005. "Then I took a year off and I watched Casey Mears, a great friend of mine, win and I watched the event on television. I said, 'You know I finished second in this thing and I've got to work hard to find a ride that I can go down there and have a chance of winning with.'

"Being a lineup with guys like this, it's really a dream come true to come down here and compete and be a favorite for this event," Johnson concluded.

Famed Porsche campaigner Synergy Racing announced on Saturday a two-car assault for the 46th Annual Rolex 24 At Daytona as the team looks to start the 2008 Rolex Sports Car Series season with a new chapter of success. One of Grand-Am's winningest teams will utilize the Grand-Am specification Porsche GT3. The two GT Class entries will carry on the Synergy tradition, once again carrying the traditional team Nos. 80 and 81.

The powerful driver lineups for both entries boast speed and experience as well as reflecting Synergy Racing's close association with Porsche, which will chase an unprecedented 62nd class victory in the race and a 37th class win for the Porsche 911.

The No. 80 EMC/Gamewell Mechanical Porsche GT3 Cup will see Mark Greenberg, Damien Faulkner, Jan Heylen and Lance Arnold team up as the No. 81 marks the return of Steve Johnson to the team to partner with Patrick Huisman, Robert Doornbos and Richard Lietz.

NOTEWORTHY: At least six drivers competing in the Rolex 24 At Daytona have fathers who have won the famous endurance race at least once. Graham Rahal (son of Bobby Rahal), David Donohue (the late Mark Donohue), and defending Rolex Series co-champion Alex Gurney (whose father, Dan Gurney, will be the race's Grand Marshal) are all veterans chasing their initial Rolex 24 win. Jordan Taylor will see brother Ricky race with dad Wayne Taylor, a former Rolex Champion, while it is yet to be determined if three-time race winner Derek Bell will race with son Justin… While it was an eventful weekend for Krohn Racing and the debut of the Lola chassis, team owner Tracy Krohn felt the team and the car were on headed in the right direction for later in the season. Both cars were involved in incidents but will be available to race in the Rolex 24.