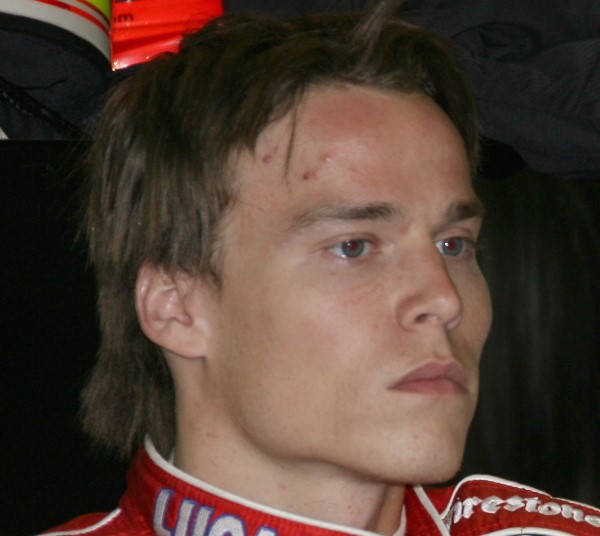 The scene was pathetic, even by post-Split Indy standards – a dashing young driver, in a new bright-red driving suit, standing next to a beautiful woman in a nearly-empty Indianapolis Motor Speedway press room moments after his greatest victory. As I walked into the press room, I met Alex Lloyd, the Indy Pro Series driver who’d just dominated the Carb-day race at Indy, who would soon be signed by Target Chip Ganassi’s IndyCar team. What if you conquered the world, and no one seemed to notice?

By any standards, Alex Lloyd is a great guy. Reporters find themselves having a great interview with him, and before long, a great conversation, and then quickly becoming friends. Ask him a question, and he’ll give you an answer… and another answer… and then ask where he can find a good babysitter so he can take his wife out to dinner. He’s that type of guy – friendly, down to earth, smart, the guy you’d want as your best man at your wedding.

[adinserter name="GOOGLE AD"]You’d also want Alex to be a driver if you owned race cars. In 2007, he won 5 poles, 8 of the 15 races in the IPS season, leading 399 of 751 laps, winning the championship by a huge margin. And, he did that running for Sam Schmidt Motorsports, not exactly the highest-dollar operation in Indianapolis.

None of this should come as a surprise, as Alex is the guy who had epic battles with Lewis Hamilton when they were younger. “At age 10 I started racing go karts, and at ages 12 – 13 I was racing with Lewis in karts. I’ve got lots of videos of him and me dueling at the end, with me winning some, and him winning some."

They met up again in the UK Formula Renault Championship in 2003. By 2003, Hamilton was a prodigy in the Williams camp, who sent him to learn in the feeder series with their full backing. Lloyd, on the other hand, was running for a financially-challenged team, but lead Hamilton in the points until the middle part of the season. He finished second to Hamilton in the points, despite winning their last race. “I’m kinda frustrated with that season" said Lloyd to AR1, still wondering if a fair fight in equal equipment might’ve changed those results.

He was still good enough to win a two-day shoot-out at Silverstone for the 2003 McLaren Autosport BRDC (British Racing Drivers Club) Award, which is given annually to the most promising young Brit driver. This gave him both an F1 test at McLaren as well as people who championed his career — guys with names like Nigel and Jackie.

So why would a nice Brit like Alex Lloyd be on this side of the pond? Part of the reason is that no deal came together for Lloyd in Europe. He was unable to find financing for GP2 or World Series by Renault. In spite of being one of the two winners in the auditions for A1GP’s Team Great Britain for 2005-2006, he was passed over for a string of unsuccessful drivers. If American fans think that our drivers need to have big wallets and inside sugar daddies, they should catch a glimpse of the brutal politics of F1 and the F1 ladder system.

Through his contacts in the BRDC he came to the USA, first with a successful test in a Champ Car Atlantic ride, then to give it a go in the Indy Pro Series. In 2006 he won the IPS support race for the USGP at Indy, and then moved to Sam Schmidt Motorports for 2007, where he ran away and hid from the entire field most of the year.

The problem, of course, is that the IPS got no respect. The list of drivers moving from the IPS to the Big Show in the IRL, who don’t have the last name of “Foyt" or “Andretti," is pretty short. If Lloyd had dominated a NASCAR Busch race at Darlington instead of an IPS race at Indy, he’d been surrounded by a hysterical mob, and his name would have been on the lips of every NASCAR fan. Instead, there he was, in a nearly-empty press room, with the few reporters seemingly more interested in his very pretty wife than in what he’d just accomplished – he’d become the only racer in history to win Indy races on both the F1 road course as well as the famed oval.

Fortunately, 2007 was the year that IRL teams got involved with the IPS. For the first time, winning drivers are coming to the IRL, with Hideki Mutoh joining Lloyd in the promotion. “This year the series really grew" observed Lloyd, “Last year you had no opportunity." On October 18, Target Chip Ganassi Racing announced that Lloyd will be running a few of the IndyCar Series races, and perhaps some GrandAm Sports Car races. Sponsorship has yet to come together — “But it’s still early.." added Alex, confident that sponsors will be found. Alex takes pride in Chip’s constant refrain that he only hires the best drivers available at the time – and this time, that is him.

And make no mistake, Alex wants to be in the IndyCar Series. Specifically, he wants to win the Indianapolis 500. He’d watched the Indy 500 on TV, but really was hooked when he saw it live. “When you’ve run in the IRL, you’ve run at the highest speeds, on all sorts of tracks – ovals, road courses, and street courses… The Indy 500 is still the best race in the world."

More to the point, he wants a good life for him and his family. “In F1, it’s easy to forget that you’ve got the best job in the world. In F1, you hate your teammate, you don’t talk to anyone on another team, you can’t trust anyone." And, one doesn’t bring their kids to F1 races either — “I remember the press criticizing Juan Pablo because he was seen in the garage area with his son, and the press and F1 community said that he’d lost it, that he no longer was dedicated. Family is not accepted in F1." By comparison, drivers’ wives and children have always been a part of Indy car racing. “All the drivers look after each other" commented Alex as I noted a large community of expatriate Indy car families living in the Indianapolis area.

Perhaps that is the most likable part of Alex – that he knows that long after a driver is only a comment in Indy 500 historian Donald Davidson’s notebook, their sons and daughters will remember the kind of person they really were. “I think that having a family is making me a better driver now – I have a whole family to take care of, who depend on me." And then he continued — “One of the toughest parts is to find a good babysitter…"