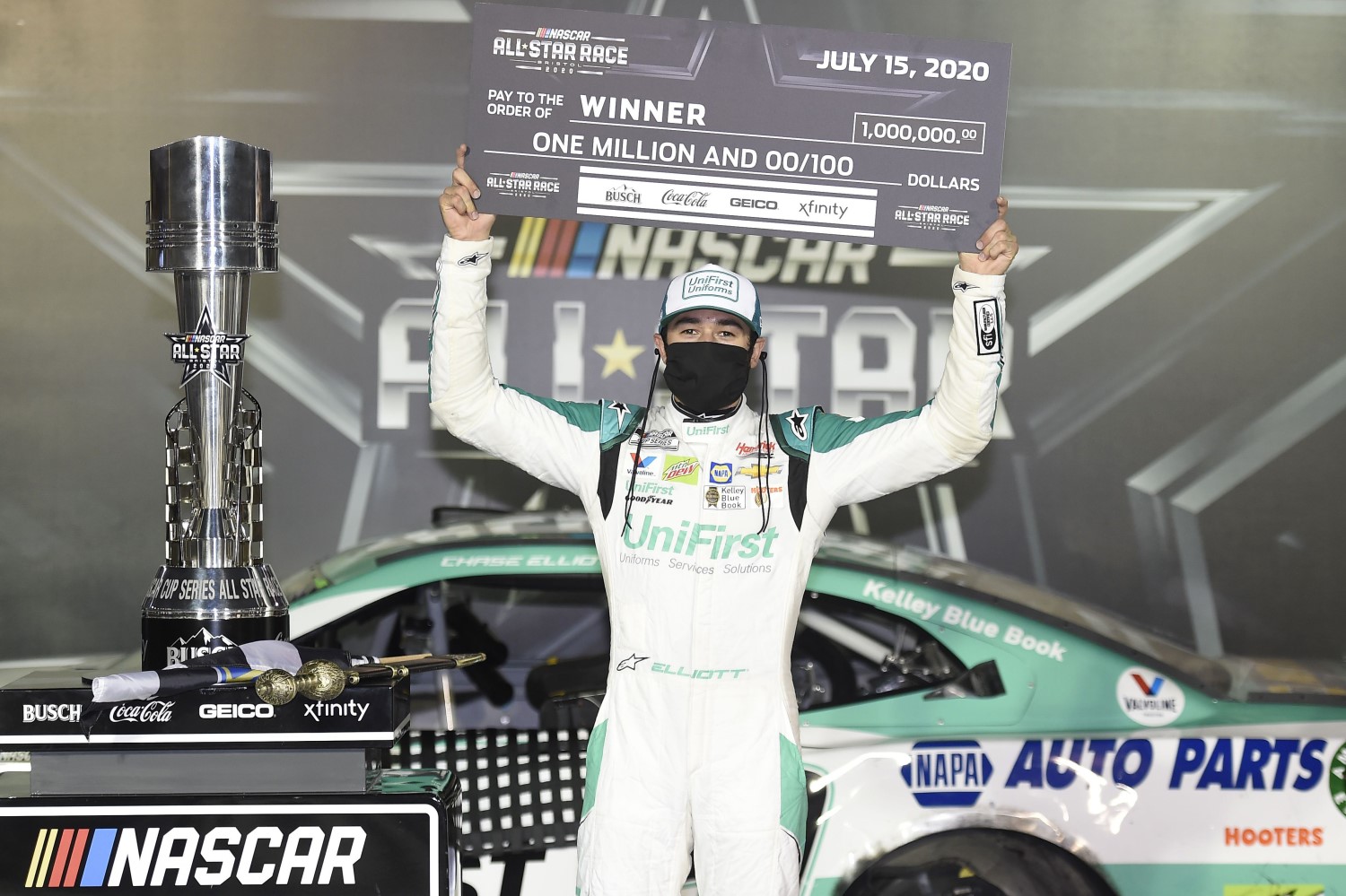 Elliott led 60 of the 140 laps en route to the $1 million paycheck. He and his father, Bill Elliott, join the father-son combination of Dale Earnhardt and Dale Earnhardt Jr. to have won the sport’s midseason All-Star exhibition. Interestingly, Bill won the race when it was held in Atlanta and Chase’s victory was in Bristol, Tennessee — those are the only two times the event took place at a track other than Charlotte Motor Speedway.

Chase Elliott’s No. 9 Hendrick Motorsports Chevrolet took a convincing lead at times in the second half of the 140-lap event, but he ultimately had to hold off a hard-charging Busch, who is still looking to hoist his first race trophy of the 2020 season. The winning difference between them was a mere .418 seconds.

[adinserter name="GOOGLE AD"]Elliott’s win was hugely popular even to the limited number of fans who were allowed to attend the race in person, and they celebrated by showering the 24-year-old with cheers.“Oh my gosh, there’s no feeling like it, nothing like it," a smiling Elliott said after climbing of his Chevrolet. “Bristol is an electric atmosphere unlike any place we go to. We’re going to celebrate this one for sure.

NASCAR tried a couple innovative and seemingly well-received ideas at the non-points race, including fitting the cars with lights that provided an underglow and also a new format for restarts that allowed drivers to pick whichever lane they preferred — outside or inside.

The race still came down to just old-fashioned horsepower and age-old strategy among the 20 drivers who earned positions in the race.

“We’re trying hard and we’re running okay, but it seemed like we were mired in 10th place for much of that race tonight and the last couple of adjustments really helped us," Busch said. “Adam (Stevens) did a great job helping the car and making it better.

“I got a good restart and went from 12th all the way up to fifth (in the final 15-lap stage) so that was a huge bonus for us getting that track position. Overall, just got to keep fighting. I think that’s like four, five, six second places this year, what do you do? You just have to keep going."

Almirola’s ninth-place finish was the best among those drivers who qualified for the NASCAR All-Star Race by winning a stage in the NASCAR All-Star Open at the track earlier Wednesday. William Byron also advanced with stage win in the Open, and Matt DiBenedetto took home the checkered flag in the Open — his first time winning the non-points paying event. Clint Bowyer earned a position on the grid by winning the Fan Vote.

IT’S IN THE FAMILY DNA. MILLION DOLLARS, WHAT’S IT MEAN TO WIN THIS EVENT, THIS NIGHT, AT THIS TRACK?

“I can’t believe it. What a better night to have fans back than tonight – y’all are awesome. There’s nothing like Bristol. There’s nothing like the lights here. There’s nothing like racing here. I’ve never won here – what a race to do it. Just really proud of our team tonight and rebounding. We’ve had a really tough couple of weeks and just felt like we had kind of gotten off base and I felt like I was struggling. Just tried to hit the reset button this week, and came out and put on a great performance – great car. Just can’t thank all our partners enough, everybody that makes this happen. All those No. 9 hats and t-shirts up in the stands – love to see it."

WHAT DOES IT MEAN TO YOU TO HEAR THOSE FANS AND SEE THEM HERE TONIGHT?

“There’s no feeling like it (cheering from the crowd). There’s nothing like it – this speaks for itself. And like I said, Bristol is an electric atmosphere that is unlike any other that we go to. Couldn’t be more excited. We’re going to celebrate this one for sure. And we’ll take that million dollars back to Georgia, why don’t we!"

What were you fighting in the closing laps with the top groove?

“It just wasn’t quite wide enough. If it had been a little bit wider and you could carry a little more speed with it, I might have had a chance. I tried to run up there early in the last stage to make it go a little earlier than I probably should have. I went back down because I knew I wasn’t going to catch him (Chase Elliott) or pass him there and I had to do something different. I just tried and I think we inched up a little closer on him, but that was about it. The M&M’s Camry, we’re trying hard and we’re running okay. It seemed like we were mired in 10th most of tonight and then the last couple adjustments really helped us. Adam (Stevens, crew chief) did a great job helping the car and making it better. I got a good restart. I think I went from 12th all the way up to fifth so that was a huge bonus for us getting that track position. Overall, just have to keep fighting. I think that four or five second places this year, what do you do? We just have to keep going. Have to thank M&M’s for supporting us. Interstate Batteries, Snickers, Toyota and Rowdy Energy – we’ll go fight next week."

What did you struggle with in the high groove to try to catch Chase Elliott?

“I just had to try something different than what we were doing. Even if I got to him, I wasn’t going to be able to pass him because the air following guys just wouldn’t let me get close enough all night. Me anyways. Overall, I don’t know. Still felt like I had to drive 110 percent to even make that finish happen. Still kind of slow, just missing something. Adam (Stevens, crew chief) made some good adjustments on pit road there during the race to get us closer instead of just running 10th all night. Just second, that’s it."