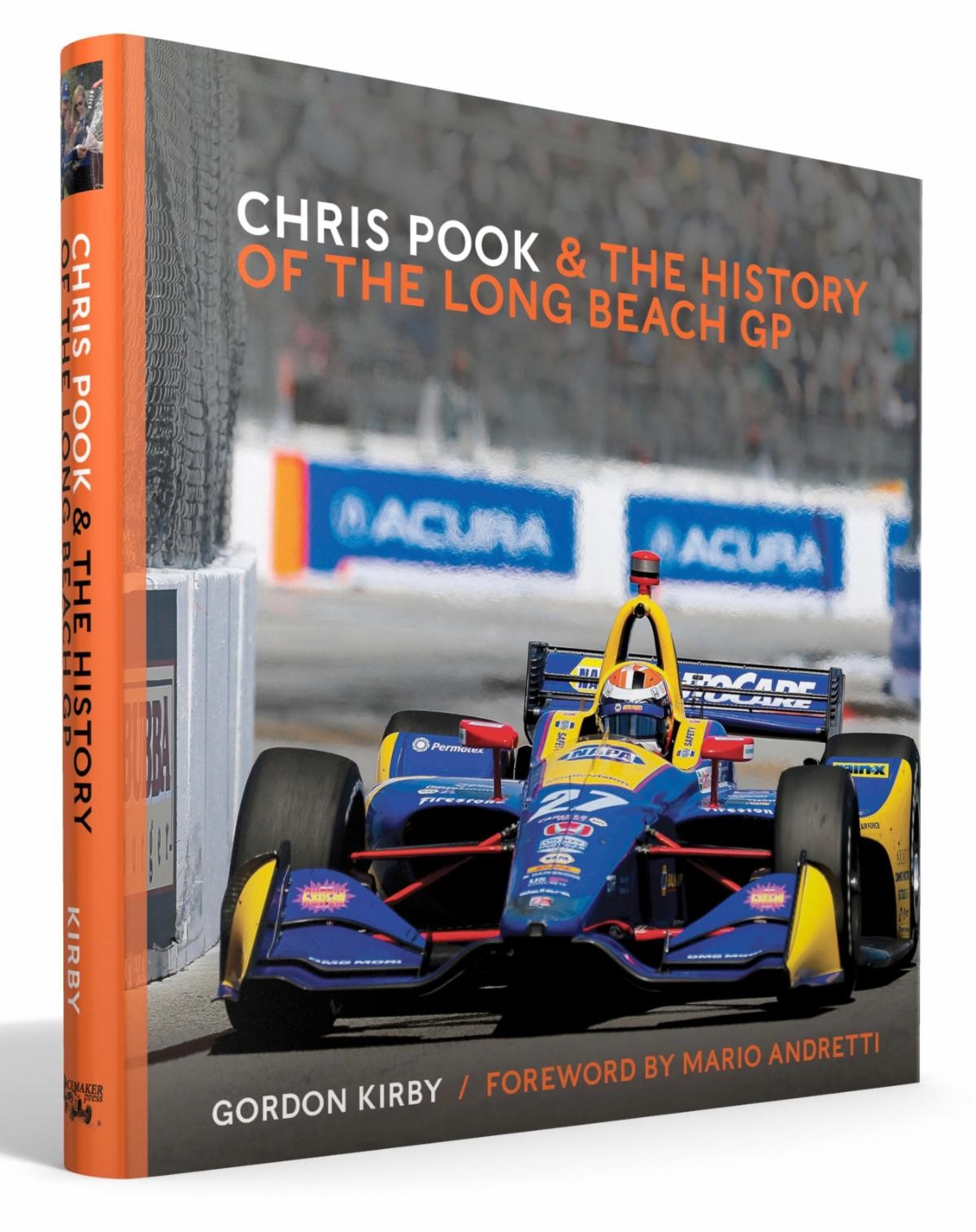 “Chris Pook & the History of the Long Beach GP," written by veteran racing journalist and author Gordon Kirby, is the quintessential chronicle of one man’s passion to create America’s most enduring and successful auto racing street circuit.

The 320-page book, published by Racemaker Press, with more than 180 photos and illustrations, retails for $80 plus shipping and handling and is available at www.racemaker.com.

The book tells the story of the life of Englishman Chris Pook and the history of the Long Beach Grand Prix, which debuted in September of 1975 through the streets of that California city, and injected new life into the urban surroundings.

Pook emigrated to the United States in 1963 at the age of 22 and soon started a travel agency in Long Beach, which he eventually sold to start another business. In his younger years he’d competed in rallies in the U.K. and Europe and had always been a race fan.

Pook’s business and entrepreneurial savvy came from his father who ran a variety of small businesses in England. His parents made sure he was properly educated at a series of private schools before attending the Sorbonne University in Paris.

The unconventional, and crazy to some, idea of running a Grand Prix race through the streets of Long Beach occurred to him one day in the early ‘70s while watching the Monaco GP on TV.

With stout determination and the powerful support of racing legend Dan Gurney, other racing greats, as well as the City of Long Beach, Pook proved his doubters wrong. It took a huge amount of work, but the first Long Beach GP was born.

Initially, the GP featured Formula 5000 cars that first year, with the Formula 1 cars arriving the following year. Formula 1 competed there for nine years before rising costs compelled Pook to switch to CART and Indy cars in 1984.

Pook’s “crazy idea" turned into a model for bringing racing to the people and using a motorsports event to rebuild flagging urban communities. It also sparked many other downtown racing events around the country. Few of these races survived, but Long Beach stands today as INDYCAR’s second biggest event outside of the Indianapolis 500.

Pook tells his story frankly and in considerable detail, providing a rare look inside the business and politics of big-time automobile racing. He provides an important insight into the trials and tribulations he faced on the road to making the race succeed, as well as the two hellacious years he spent trying to save the failing CART organization in 2002 and 2003.

“For a variety of reasons, it was a great pleasure to write this book," said Kirby, the author of 16 racing books and an accomplished journalist. “I’ve known Chris for 46 years and have enjoyed covering every one of the Long Beach races since that first race in 1975. I tried to capture the passion, and even the angst, that it took to take an idea and build it into a successful venture."

Added Pook, “I am most grateful to my friend of 46 years, Gordon Kirby, and his publisher, Joe Freeman of Racemaker Press, for taking on this project. As I actually re-read the book I am constantly reminded of all the people along the way who made the Grand Prix of Long Beach possible; in particular, Dan Gurney, without whose support and enthusiasm we would have never gotten it off the ground."

Gordon Kirby is one of the world’s most experienced and accomplished motor racing writers. He has covered more than 1,000 races over the past 45 years for magazines and newspapers around the world including Autosport, Motor Sport, Road & Track, Car and Driver, AutoWeek, Racer, Autosport Japan and Autosprint. Over the years Kirby has written 16 racing books and biographies about great drivers such as Mario Andretti, Rick Mears, Emerson Fittipaldi, Bobby Rahal, the Unser and Bettenhausen families and Wally Dallenbach. Kirby was Autosport’s American correspondent from 1973-2005 and Motor Sport’s US editor from 2010-2017. Today, Kirby is a staff writer for Joe Freeman’s Racemaker Press in Boston.