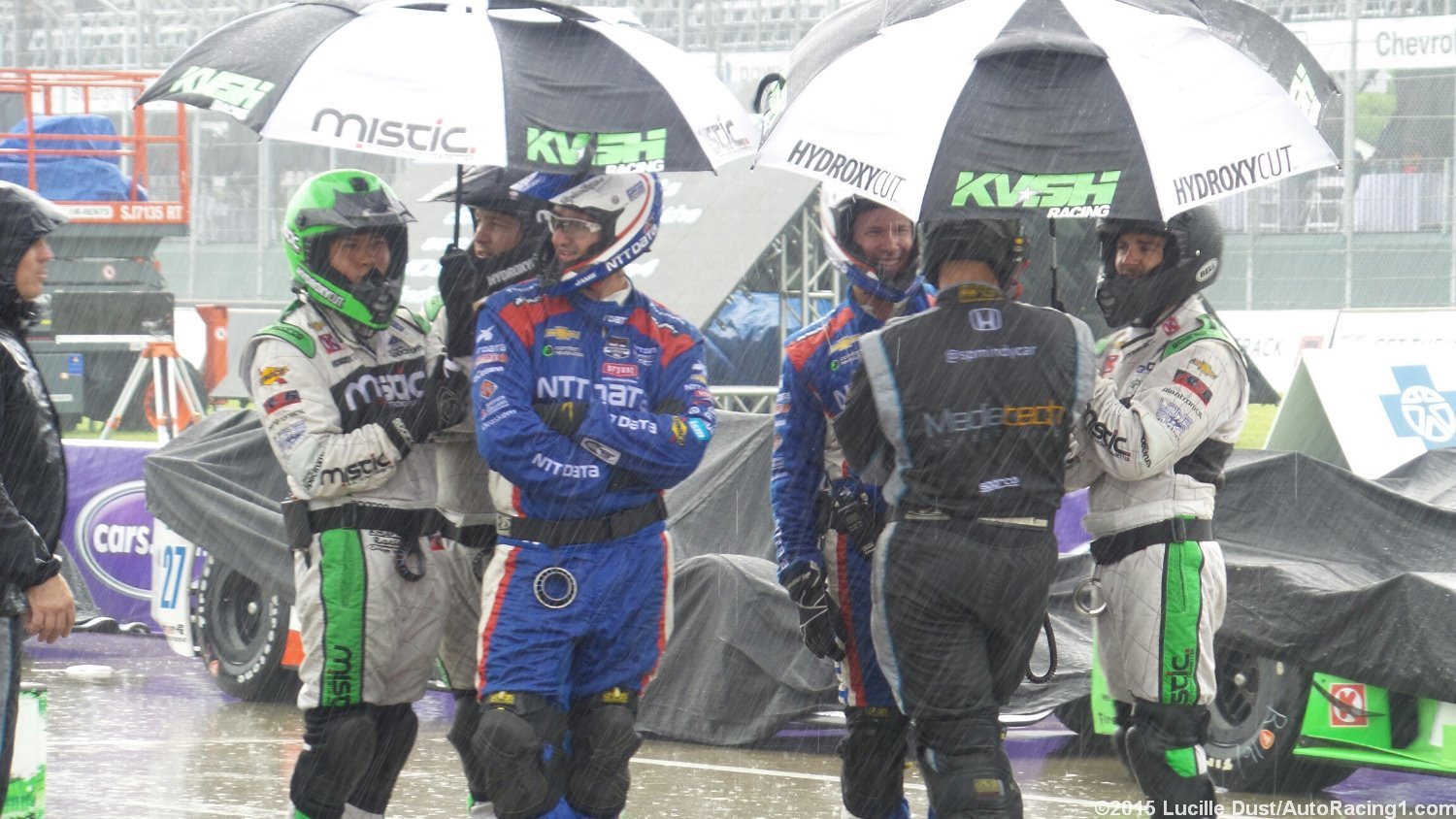 As there is much to discuss regarding this past weekend’s Chevrolet Dual in Detroit Presented by Quicken Loans, let’s get started with the subject that dominated the events on the Belle Isle.

After a lovely Friday, rain moved in for Saturday’s race. Of course, we here at AutoRacing1 have made note over the past few seasons that wet weather and INDYCAR are something of an awkward pair. Everyone remembers last year’s messy Saturday in Toronto when the series spent numerous laps parading behind the pace car (when it managed to stay on track that is) without ever starting the race. The fact INDYCAR failed to accurately articulate the reasons for the delay to fans wondering what was happening, only served to intensify the criticism.

Similar criticisms occurred this year at NOLA as the series aborted a qualifying session during a very wet weekend. When the race got started Sunday, James Hinchcliffe won a rain-shortened event that saw the majority of the race’s second half run behind the pace car, as the Indy Cars could not string together any meaningful string of green flag laps without incident. The series took heat for not having proper rain tires, not preparing for the conditions, not informing spectators at NOLA of delays, and overall putting on a very poor show.

While it was by no means a perfect weekend, Detroit was a vast improvement from Toronto and NOLA. Dual 1 was a little rough getting started, but ultimately the race got going, as a wet track began to dry.

Andretti Autosport’s Marco Andretti was the first to abandon rain tires in favor of ‘slicks’. However, it was Andretti’s teammate Carlos Munoz who would emerge the victor. And it is worth briefly discussing exactly how Munoz came out on top, a story I don’t believe has been fully articulated.

[adinserter name="GOOGLE AD"]The Colombian and a host of others including Scott Dixon, Helio Castroneves, Juan Pablo Montoya, Simon Pagenaud and Will Power, came to pit road on lap 15 during a caution period and changed to slick tires. Andretti, who pitted on lap 9 cycled to the lead, where he would remain for much of the next 25 laps. Munoz emerged from the pits running 15th behind all those mentioned above.

He would remain outside the top-10 for about the next 20 laps. However, around lap 33 teams began to fear rain was on the way and came to pit road for wets. Deciding not to preempt the wet weather as his competitors did, Munoz found himself in a very enviable position on lap 40 when Andretti came to pit road on

With many of his competitors running wet weather tires on a dry track, Munoz cycled to the lead and had two laps on slicks where he was up to 10 seconds quicker than the rest of the field. He would pit on lap 42, switch to wets, and come out about 23 seconds ahead of Andretti. And it was at that time, when the rain began to intensify meaning Munoz was in the catbird seat. Not only had he taken advantage of his competitors’ decision to switch to wets too early. But pitting later meant his tires were fresher when the rain did come. His 20-plus second lead over Andretti would grow to 30 seconds by the time the race was red-flagged on lap 47.

Twenty minutes later the series would call the race, and the easy-going 23-year-old Colombian had his first IndyCar win. Andretti was second, with Simon Pagenaud third.

Of course, with a race the next day…

The celebration was short-lived. The teams had a quick turnaround to prepare for Sunday, and an 11:30 a.m. qualifying session, in which the usual “knockout" format was scrapped in favor of a two group session. Chip Ganassi Racing driver Sage Karam would pace the first group, and was in-line for at least a front row start.

However, after three minutes, the second group’s session was red-flagged then ultimately canceled. This meant, of course, the teams would start on entrant points and Karam’s front-row effort was negated. Also, noteworthy is that James Jakes damaged his #7 SPM Honda in the first session, thinking of course, he was qualifying for the race.

Now, if it was determined that the conditions were simply too dangerous so be it. Personally, I would have advocated the session being suspended (there was no on-track running between qualifying and the green flag at 3:50 p.m. ET), but I wasn’t there nor was I looking at telemetry and the like. Also, the procedure of using entrant points if a session cannot be completed, while certainly less-than-ideal, is the one clearly outlined in the Rule Book.

However, on TV, session 2 did not look appreciably worse than session 1. Did INDYCAR cancel session 2 because they were unable to replicate similar conditions to the first session? Sorry, but separate sessions are inherently unequal, and by that logic INDYCAR would have theoretically had to cancel the second group if the sun had come out.

Granted, there are conditions that are unsafe to race. Still, isn’t the point of a race to go as fast as you can in the conditions presented?

As for the concern about drivers and teams crashing and having to fix their car hours before a race, well, who ever said they had to turn a lap? And why kill the session with just two minutes to go before its official?

I don’t know exactly, I’m just saying from my vantage point the second session didn’t seem all that worse than the first. And for the series to just cancel the session, was grossly unfair to Karam and the #7 SPM team.

Sebastien Bourdais executed his strategy to perfection in managing his fuel while holding off a charging Takuma Sato to score his 33rd career win. However, for this discussion I’m going to focus on some drivers who had quite a lot on the line this weekend in Detroit.

It wasn’t so much that Tristan Vautier’s single-seater career seemed to be in the dumps, rather than the 2012 Indy Lights champion seemed to have just totally fallen off the radar. Sure, you would occasionally see Vautier at a race working as a driver instructor in the Mazda Road to Indy, or the occasional sports car ride. But in all honesty, I hadn’t heard Vautier’s name mentioned seriously or even casually with any IndyCar ride until it was announced he would qualify James Davison’s Dale Coyne Racing Honda for the Indy 500.

Vautier put Davison in the field, before getting called back to DCR to substitute for a sick Carlos Huertas during the 500. With Huertas still on the sidelines, Vautier was enlisted for Detroit, where he finished 17th Saturday, before a spirited drive combined with a little bit of luck saw Vautier finish 4th Sunday.

For a team that has had a dismal start to 2015, Vautier provided the highlight of DCR’s 2015 season so far, and finds himself signed to drive this weekend at Texas. And suddenly it appears, Vautier’s IndyCar career is very much back in play.

For some time, many have been calling for Noblesville, IN native Conor Daly to get an extended look in IndyCar. The son of former Indy Car driver Derek Daly, of course, competed in GP2 and GP3 from 2012-2014 with mixed results. For 2015, young Daly shifted his focus stateside but was unable to secure anything full-time.

Filling in for the injured James Hinchcliffe, Daly spent large chunks of both races running in the top-10. While contact from behind by Ryan Hunter-Reay caused a flat tire and forced Daly to make an untimely stop Saturday, he would lead 12 laps Sunday and finish sixth. And perhaps, a better-timed final pit stop may have kept Daly in contention for the win.

Overall, Daly acquitted himself more than admirably. Like Vautier, Daly earned himself another opportunity, and he’ll be behind the wheel at Toronto.

As mentioned above, Karam got something of a raw deal in qualifying Sunday. And while the Nazareth, PA native seems to have endured his fair share of rotten luck lately, young Karam did not do himself any favors with his dodgy driving in Detroit. Saturday he was penalized for blocking Sato and Sunday received two penalties; one for blocking, and another for avoidable contact.

Clearly, Karam is talented, as we saw last year at Sebring and Indy, and I think he has better days ahead of him. However, he seemed to drag his Indy misfortune to Detroit, which made for two bad weekends rather than one.

Clearly, Mike Conway set a pretty high standard for the road/street racing half of the #20 Fuzzy’s Vodka Chevrolet in 2014. While Luca Filippi has had some decent runs so far in 2015, the unique #20 Fuzzy’s Vodka road/oval specialist timeshare only works if the team is contending for wins or at the very least solid finishes. Filippi has come nowhere close to doing this and I have to ask, and worse, he seems to often exacerbate poor runs with silly mistakes trying to make something happen.

Of course, the irony is that with only three remaining road/street course races (yes Toronto, Mid-Ohio and Sonoma are all that’s left), Filippi very much needs some good results.

Regarding IndyCar’s decision to adopt implement aero kits in 2015, I still maintain that it is too early to render a conclusion. But we once again saw the racing interrupted as the track was littered with needless clutter. See my response to an AR1 reader for thoughts on aero kits and Race Control during the weekend.

It’s been a brutal 2015 for Verizon IndyCar Series rookies. Get this: of the 8 rookies to have entered at least one race, they have recorded 14 finishes of 20th or worse, three outside the top-30. Only three times has a rookie finished in the top-10, the best finish being Daly’s 6th Sunday. Throw in Rocky Moran’s broken thumb in practice at Long Beach earlier this year, and you have injury added to insult.

Granted, there’s been have been some noteworthy occurrences of rotten luck to have struck the youngsters (i.e. Daly’s fire at Indy or Karam losing his chance at pole Saturday). However, for those who say anyone can jump into an Indy Car and be up to speed quickly, the current crop of rookies would indicate that is not the case.

I still wouldn’t call it good. But ABC’s coverage after the AWFUL showing at the GP of Indy, the broadcasts vastly improved for the next three races, as the Indy 500 and Detroit were respectable showings. And while there are many welcoming the better production of NBC Sports returning in Texas, keep in mind, we’re looking at about 10 months before IndyCar is on network television again, so IndyCar essentially disappears from the face of the earth for the mainstream public for the good part of a year. What are they thinking?

Credit Roger Penske for his efforts to improve the Belle Isle for IndyCar. The track was pelted with rain this weekend and held up to produce two wet-weather races. Also, kudos to the fans who stuck out the tough weather.