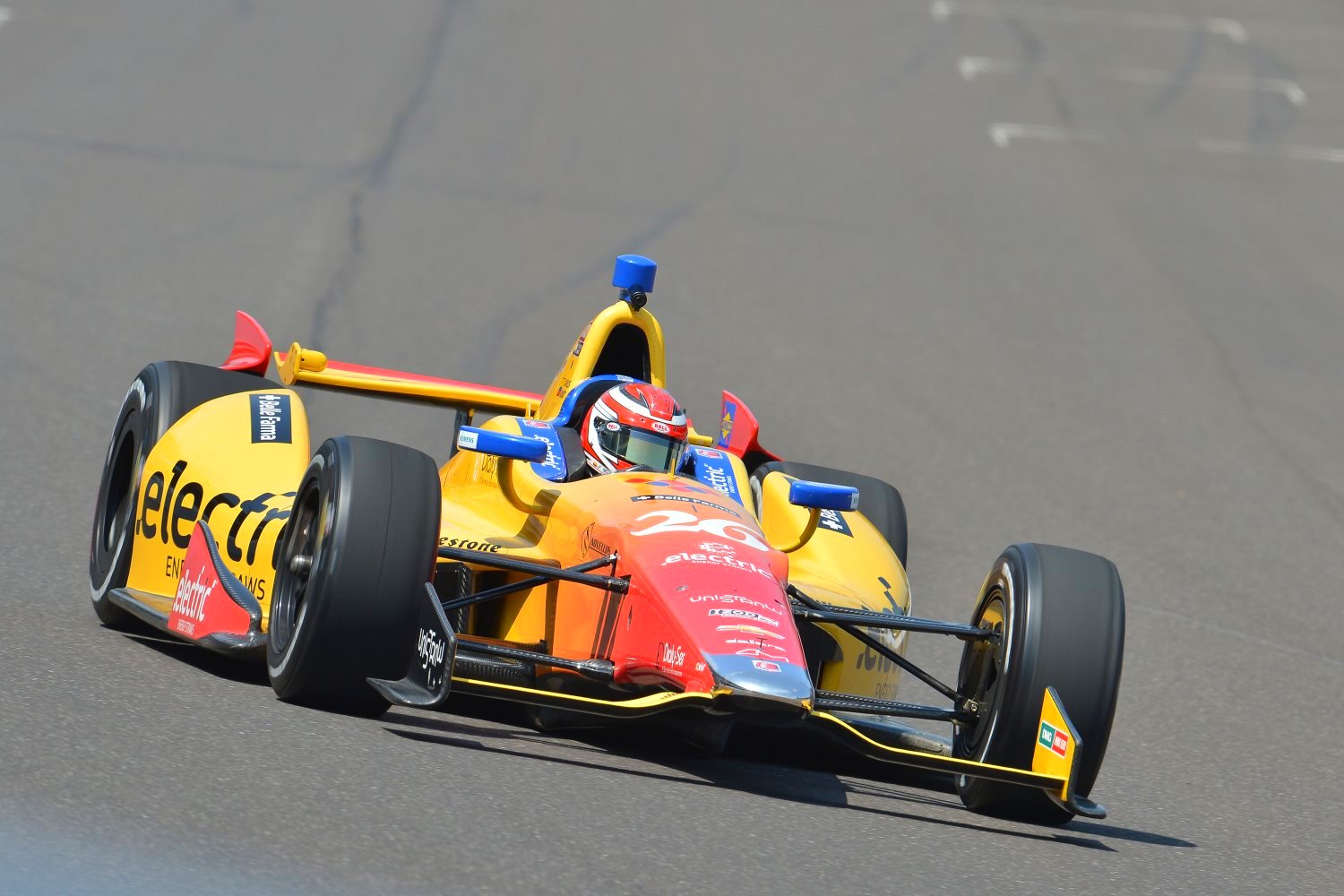 She's beautiful on the inside.

I presume you've all heard the expression, which immediately brings to mind a woman, who for whatever sterling qualities she happens to boast, aesthetically speaking, doesn't exactly impress. And when someone notes the fact said woman is "beautiful on the inside," they are telling us to look beyond the immediate, the superficial; to find some greater quality that maybe isn't apparent to the naked eye.

And what does any of this have to do with IndyCar you may ask. Well, if you changed the feminine to the neuter, the expression would be absolutely perfect in describing the current generation Dallara DW12 Indy car.

Yes, the DW12 doesn't exactly impress at first glance or thousandth for matter. Hideously bloated rear wheel guards, an incredibly narrow front that with no logical fluidity suddenly transforms into an incredibly wide rear, and numerous other less than appealing features, make the DW12 somewhat difficult on the eyes. And while many indicated when the DW12 debuted that we would ultimately grow accustomed to its — to put it politely — unique design, I for one am still in growing accustomed process.

Further, these aesthetic shortcomings are arguably exacerbated this time of year. With Indianapolis 500 practice having begun, and many in the IndyCar world intoxicated with nostalgia, inevitably there are bound to be comparisons with the elegant racing machines of yesteryear. And since back-handed compliments are a theme of the day, I suppose the current DW12 design helps keep the romance of Indy car racing's glorious past alive.

Still, sarcasm aside, I must ask: does our continued focus on the DW12's aesthetics (or gross lack thereof) cloud our judgment regarding the current racer? In constantly bemoaning all the current generation Indy racer is not, are we failing to see the car for what it actually is?

Because if we judge from the on-track product, not just in 2013, but last year as well, the DW12 has been nothing short of a smashing success. Yes, unsightly as it might be, when it comes to on-track action and excitement, the DW12 hasn't just been good. Rather, it has arguably been the primary catalyst, in greatly improving the on-track IndyCar product, which is as exciting as it has been in recent memory.

Now, there are numerous examples that can be given for this. However, let's start with the fact the DW12, whether intentionally or not, has greatly leveled the playing field, ad provided a platform, in which more teams can reasonably compete.

Remember, between the merger in 2008 and the first six races of 2012, Team Penske and Target Chip Ganassi Racing were dominant, winning an astounding 62 of the 75 Indy car races contested. Penske and Ganassi had mastered whatever intricacies there were to the prior generation Dallaras, rendering the rest of the field, an afterthought.

And while I am not a believer in some egalitarian Utopia, complete and total dominance is well, boring. The advent of the DW12 last season has ended the duopoly and brought more contenders into play. Yes, Penske and Ganassi have combined to win 9 of the 19 races, meaning the rest of the field is only 3 race wins behind equaling their total of the four previous seasons.

Of course, we've seen this in the fabulous start to the 2013 season, highlighted by last weekend's epic finish in Sao Paulo, where James Hinchcliffe passed Takuma Sato on the final corner of the final lap.

Further, the fact we are seeing names like Hinchcliffe, Sato, or Josef Newgarden, who was in the mix during the closing laps, competing for race wins adds to the intrigue. Sato won his first race at Long Beach two weeks before, the first win for A.J. Foyt Racing since 2002. Hinchcliffe, who has won two races in 2013, scored his first career win at the season opener in St. Pete. And although Barber winner Ryan Hunter-Reay won the series championship in 2012, the likable American remains something of a fresh face in victory lane, and the greatest protection insuring Penske/Ganassi dominance doesn't resume.

Now, one could say that parity would have occurred with any new car, the DW12 or otherwise. Further, if could be argued that the current tightness of the field will loosen up as time goes on. Of course, this argument ignores that Penske and Ganassi won the first six races with the DW12, they have won only 3 of the last 13.

Another argument that could be made is that IndyCar regulations are the overriding factor in producing closer, more exciting racing. While that may be true, one cannot deny the fact Dallara has built a fleet of cars for the entire field. Further, Dallara has arguably managed to do something no Indy car designer ever has.

Remember, one shortcoming of prior Indy car designs, and/or the regulations devised by the respective sanctioning bodies, has been the inability to design a racer suitable to the variety of tracks the sport runs. For example, in the early 2000s, CART featured Lolas, Reynards, Penskes and Swifts, which were great on road courses, but made it difficult to overtake on short ovals like Nazareth and the old one mile Chicago oval.

The prior generation Dallara created full-throttle pack racing on larger ovals such as Kansas, Kentucky and Texas, while the racing was more enjoyable on short ovals such as Milwaukee and Iowa.

So far, the DW12 has shown from a racing perspective, it has no such weakness. Its raciness (if that's a word) is transferrable venue to venue.

Both last season and early this year, the DW12 has been racy on tight street circuits. The past two years it put on a fabulous show at Barber Motorsports Park, a track originally built for motorcycles. Last year's Indy 500 will go down as one of the better in recent memory. Full-throttle, pack racing was eliminated at the high-banked 1.5 mile Texas oval saw its best IndyCar race in years. Sure, Belle Isle left something to be desired, although, some of that can be attributed to the track coming apart, and the fact Belle Isle is well, Belle Isle. Hopefully, the 2013 layout will result in a better show.

Yes, Mid-Ohio and Sonoma last season weren't exactly classics. However, the racing at both venues was better last year than before.

In short, any generation Indy car has been able to put on a thrilling show at Milwaukee or Indy. But the DW12 has shined even at venues with a reputation for less than thrilling races, proving to have no weakness on a specific type of track, something one could argue has not occurred in an Indy car in recent memory. While the degree to which the credit should be attributed to Dallara can be debated, the fact Dallara should be credited cannot.

Now, it must be said Dallara has certainly enjoyed some help. Much is of course made of Firestone's engineering excellence in building tires that degrade, but don't suddenly go off a la Pirelli in Formula One. Firestone has been nothing short of a phenomenal partner of IndyCar and deserve credit for the excellent racing, as well.

Still, Firestone did build tires for prior generations of cars. Yet the racing has undergone a dramatic upturn in form since the arrival of the DW12.

To what extent, the reason for this is the car, the regulations, the tires or the teams taking a step forward I'm not exactly sure. However, what cannot be debated is that Dallara has produced a car that has resulted in some of the closest, most exciting racing the sport has seen in years. Whether the series runs a short oval, a big oval, a street course, or a motorcycle track, matters not at all. The show is excellent wherever.

Sadly, I’m not sure Dallara will ever get the credit for this they deserve. However, in terms of on-track competition, the last year and a half has been something of a golden age in the world of Indy car.

Unfortunately, you'd never know it looking at the car.