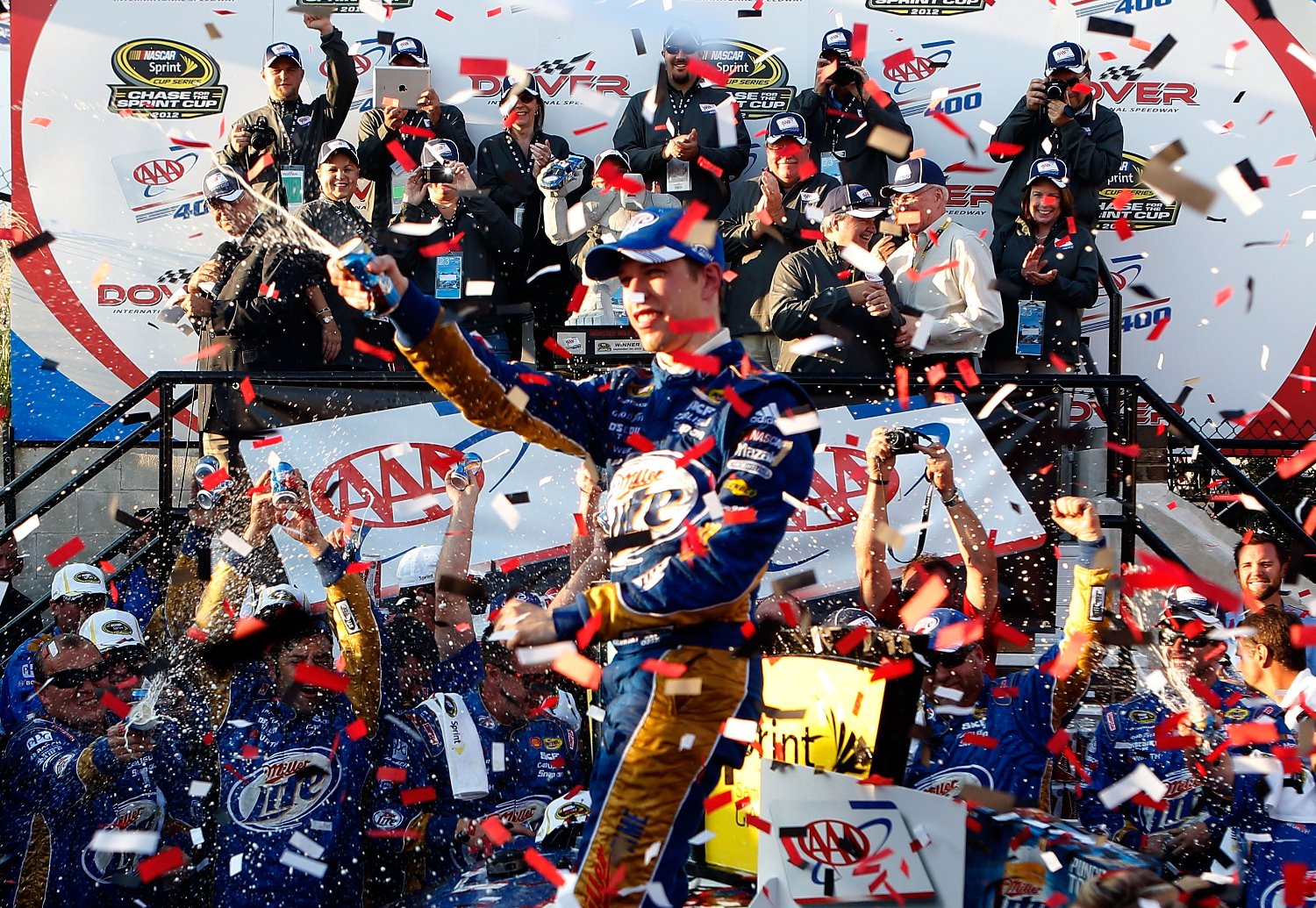 The Penske team has the best engine on fuel mileage right now and that helped Brad Keselowski get his first win at the Monster Mile after Kyle Busch, Denny Hamlin, Jimmie Johnson and others had trouble with their fuel windows at the end.

Keselowski inherited the race lead when Kyle Busch and Denny Hamlin pitted for fuel from the top two positions late in the race. Keselowski beat hard-charging Jeff Gordon to the finish line by 1.078 seconds to win his series-best fifth race of the season, his second in the Chase, his first at Dover and the ninth of his career.

Mark Martin rallied from a lap down to run third, followed by Jimmie Johnson and Carl Edwards. Johnson, who entered the race with a one-point edge over Keselowski in the Cup standings, left with a five-point deficit to his Dodge rival.

What Johnson couldn't accomplish on the race track, he did on pit road. With a 12.5-second stop for fuel and tires under caution for Matt Kenseth's Lap 308 brush with the Turn 2 wall, Johnson beat Busch, whose stop took a second longer, out of the pits for a restart on Lap 316.

Kenseth's crash in Turn 4 a lap later necessitated the fifth caution of the race, after which Johnson held the top spot from a restart on Lap 322 and kept Busch on his rear bumper until Lap 354. After a discussion about possibly sacrificing track position and saving fuel for the end of the race, Johnson gave way to Busch on the backstretch.

Shortly thereafter, Johnson, in fuel-saving mode, surrendered the second position to Hamlin, and all three of the top cars tried to compensate for shortfalls on fuel. Busch came to the pits for a splash of gas on Lap 390, and Hamlin followed on Lap 391. Busch and Hamlin finished seventh and eighth, respectively.

"I thought it was a solid effort," said Jeff Gordon afterward. "Our car was pretty good right from the start. We struggled a little bit on the shorter runs. But we got it going. The car was a good top three or four car.

"Then we started really struggling on restarts. Front tires, really no grip the first 10 laps. So we started losing positions on restarts. That probably played to our favor because we lost track position and then we ended up coming in and topping off there at the end.

"We had a good racecar. Once we got going, then we were good. Gave us the opportunity to not have to save fuel, keep the pressure on those other guys so couldn't conserve as much.

"The No. 2 made it. Got a little bit tight at the end. I thought it was going to be a race between me and Mark. I saw him back there. We had a little bit of a gap. My car was working pretty good right there. Started getting tight. Boy, here he come. We knew it could turn out to come down to a fuel mileage race.

"Still a great finish. Come home second. This is nice to follow up with what we had last week. We're running good. We were running good at Chicago when we had the issue. I'm proud of this team. Just taking a few steps in the points each week. We got seven more weeks to get it done.