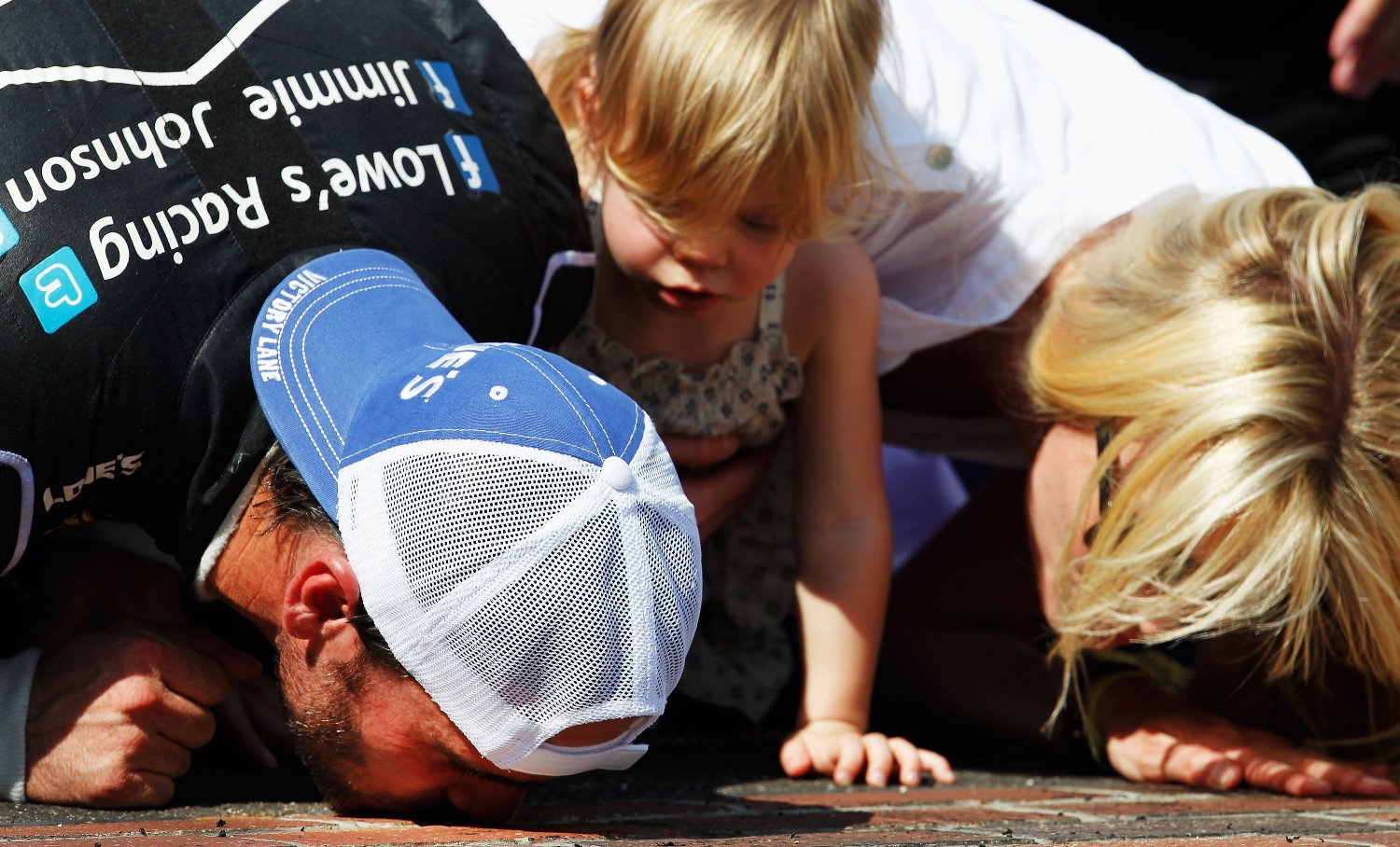 During the NASCAR weekend at the sacred grounds of the Indianapolis Motor Speedway, we witnessed a five time Sprint Cup champion serve notice that he is going after a six pack. After the Sprint Cup race, we watched the winning team kneel before the speedway's historical brick stripe for the ceremonial kissing of the bricks. That one yard wide stripe of bricks, located at the speedway's start-finish line, was literally covered with Goodyear rubber, motor oil and perhaps even an essence of Sunoco Racing Fuel.

That didn't matter to the winning team. They will be the first to tell you that those nasty looking bricks never tasted sweeter. With those thoughts in mind, let's begin with:

THUMBS-UP to Jimmie Johnson for winning the Crown Royal Curtiss Shaver 400, in a very convincing fashion, at a race track that every professional race driver in the world would love to win at. Johnson scored his third win of the season which virtually secures his presence in the 2012 Chase for the NASCAR Sprint Cup championship. Of equal importance to this driver, it was Johnson's fourth win at Indy and that places him in some very prestigious company. Previous four time winners at the Indianapolis Motor Speedway includes the legendary A J Foyt and Al Unser along with two of Johnson's personal racing heroes: Rick Mears and Jeff Gordon.

THUMBS-UP to Johnson's #48 Hendrick Motorsports team, led by crew chief Chad Knaus, for providing their driver with a superior race car. His margin of victory was a whopping 4.758 seconds. If that margin had been slightly larger, the U.S. Post Office would have deemed it necessary to issue Johnson his own personal zip code.

THUMBS-UP to the winning driver's over the wall gang for excellent pit road service all throughout the race. This is especially true of their final four tire stop that clocked in a 13.0 seconds. It's performance levels like this that leads to five, possibly even six, NASCAR championships.

THUMBS-UP to those classy looking, royal purple, pillows that were provided to the winning team to kneel on while kissing those nasty looking bricks.

WHAT'S-UP with no one considering the idea of pouring some Crown Royal on the bricks to help out with the taste. I bet the official race sponsor would have loved this idea.

THUMBS-UP to Jimmie Johnson for offering his lovely wife the use of the sleeve of his racing uniform so she could quickly wipe off the brick grime from her lips and face.

THUMBS-UP to the Johnson's beautiful baby daughter for declining to kiss the bricks with mom and dad. This young lady knows "yucky" when she sees it.

THUMBS-UP to Kyle Busch for his second place finish despite the trying circumstances early in the race that placed a good finish in jeopardy.

WHAT'S-UP with all of that extremely thick black smoke that belched from Busch's car while coming down pit road following the team's second pit stop? A very coy Dave Rogers, the team's crew chief, told an ESPN television reporter "if it's problem, then we'll find out." Later, claiming there are some things you don't talk about on the radio, Rogers said his driver stalled the car, the engine loaded up with raw fuel which burnt in the tail pipes. Busch went from third to 13th on the restart and spent much of the day making up the track position that led to the runner up finish. It was also this team's first top five finish since the Coca Cola 600 at Charlotte from the end of May.

THUMBS-UP to Greg Biffle who's third place finish at Indy was the lone bright spot for the Roush Fenway Fords.

WHAT'S-UP with the other two Roush Fenway Fords? First there was Carl Edwards who started this race from the front row and was a definite pre race favorite. Unfortunately, the car ran 13 laps before a reported ignition problem turned up. He wound up 29th, four laps down, in the final running order. The long day at Indy also put him in a rather serious hole regarding any hopes of making the Chase line up.

WHAT'S-UP with Matt Kenseth's fiery accident that cost him the championship points lead? Kenseth was caught up in a lap 134 four car melee triggered by Joey Logano that left him parking his car, on fire, at the bottom of the race track. He started this race leading the points, but that 35th place finish dropped him to second, 14 points out of first.

The final THUMBS-UP of the week goes to Dale Earnhardt Jr who parlayed a fourth place finish at Indy into becoming the new championship points leader. This is the first time Earnhardt has led the Sprint Cup points since September of 2004. There are already reports that indicated the members of this driver's massive fan club, the Junior Nation, arrived at work Monday morning extremely hung over.

Meanwhile the main lady at our house, still the T shirt wearing-card carrying member of the Junior Nation, is still frequently visiting my racing office to wave her menacing index finger at me while shouting
J-U-N-I-O-R !!! It's very tempting for me to say "yes dear you're right, he's leading the Cup points and it only took him eight years to get there." It's easier to keep those thoughts to myself because, at our house, a comment like that will get you an invitation to sleep on the couch.

The final WHAT'S-UP of the week goes to television ratings and the excuses often associated with them. The A C Nielsen Company, the people who count people watching TV, tells us that the Sprint Cup race at Indy had a 3.8 household coverage rating that translated into 5,054,089 viewers. Nielsen also tells us that these numbers were considerably down from last year's 4.6 household coverage rating. It's already been quickly pointed out that the difference in the two ratings is directly related to last weekend's coverage of the opening of the Olympic Games.

WHAT'S-UP with blaming a ratings decline on the Olympics? We all need to swallow a spoonful of truth medicine and then take a good hard look at the real reason the NASCAR TV numbers were down. The fact of the matter is: the Cup race at Indy was B-O-R-I-N-G !!!. There was more passing for position between two cars exiting pit road than there was on the race track. It's no wonder so many people changed the channel to watch Olympic freestyle ping pong.