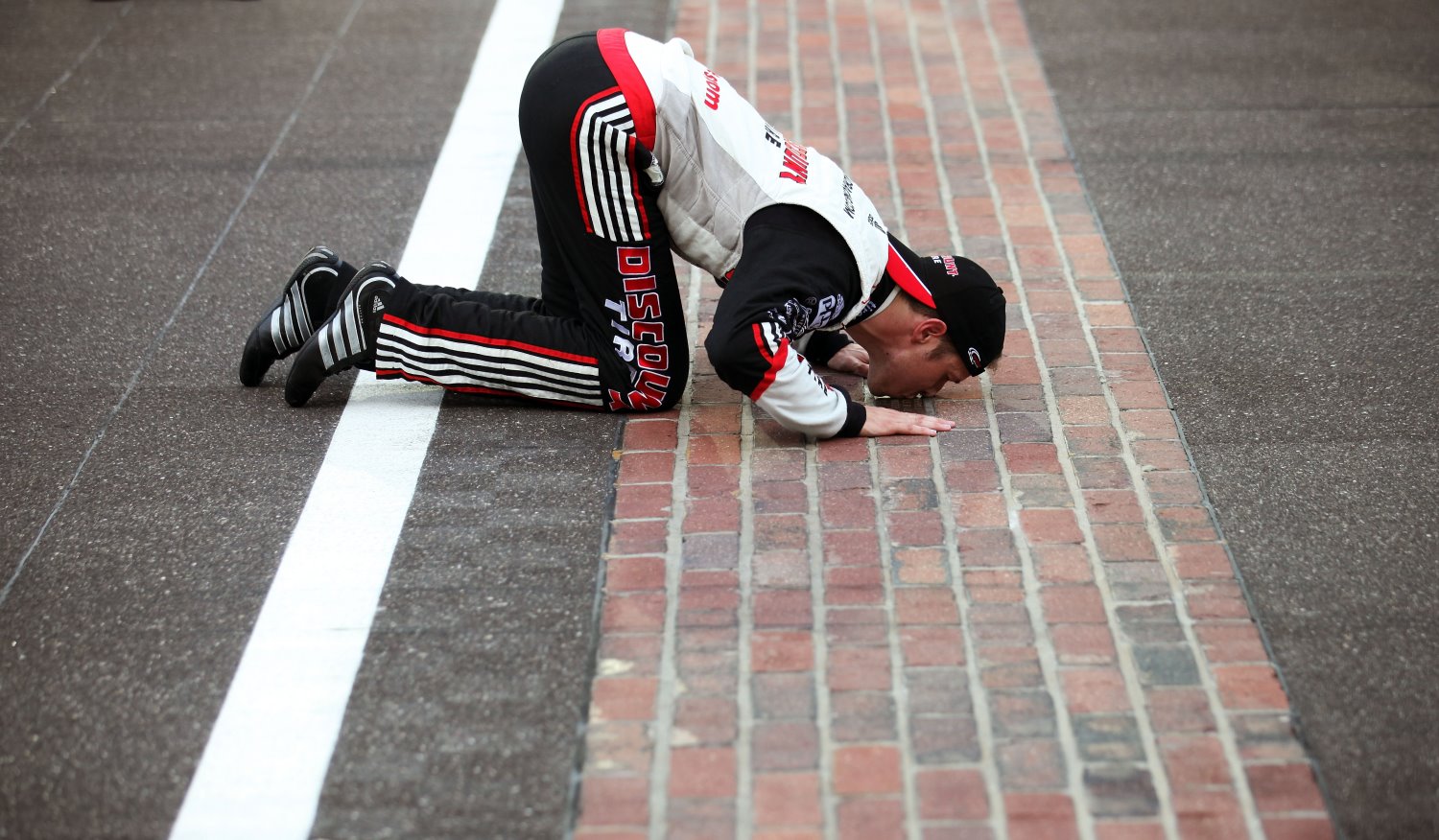 Penske Racing has earned a record 15 Indianapolis 500 victories, but this was the first NASCAR victory for the team on the 2.5-mile oval. Keselowski passed Penske teammate and 2006 Indianapolis 500 winner Sam Hornish Jr. on Lap 72 of the 100-lap race and beat him to the finish by 3.304 seconds in the No. 22 Discount Tire Dodge.

"I've been watching races here for a long time as a kid from Michigan," Keselowski said. "Everyone knows how special Indy is. To win the first Nationwide Series race is special here. This is for Roger. It's special for me to deliver it to him."

Kyle Busch led a race high three times for 51 laps in the No. 54 Monster Energy Toyota. But he never recovered from a slow pit stop under caution on Lap 64 that dropped him from first to ninth on the ensuing restart. Busch ended up finishing 22nd, slowed by a spin after losing control on a restart on Lap 79. He side-swiped Hornish during the incident, who continued in the No. 12 Alliance Truck Parts Dodge without trouble.

Elliott Sadler appeared to have a chance at victory, taking the lead on a restart on Lap 83 in the No. 2 OneMain Financial Chevrolet. But NASCAR judged that he jumped the restart, and Sadler was forced to serve a drive-through penalty on Lap 89. Keselowski was officially credited with leading the laps Sadler was out front, and Keselowski then pulled away from Hornish over the final 10 laps.

"I didn't have any dreams of grandeur or whatever of going out there and passing him on the last lap," Hornish said. "It would have been awesome if we did, but I felt like as soon as I got within 10 car lengths, he was going to step it back up a little bit. I knew it was going to have to be one of those deals where he made a mistake for me to be able to get the job done and to feel comfortable about doing it."

2005 Indianapolis 500 Chase Rookie of the Year Danica Patrick finished 35th in her stock-car debut at IMS in the No. 7 GoDaddy.com Chevrolet. She was eliminated from the race on Lap 40 after hitting the rear of Reed Sorenson's car in Turn 1. Sorenson spun and collected Patrick, with both cars hitting the SAFER Barrier in Turn 1.

In NASCAR Sprint Cup Series qualifying, Denny Hamlin earned the pole for the Crown Royal Presents the Curtiss Shaver 400 at the Brickyard Powered by BigMachineRecords.com with a lap of 182.763 mph in the No. 11 FedEx Express Toyota.

"This is very, very high up on my list of tracks to want to win," Hamlin said. "I consider it as high as the Daytona 500, personally, so this is a great start to our weekend knowing we have the No. 1 pit stall, we have obviously a fast car, and I have a great pit crew that's going to hopefully keep me out front all day."

Carl Edwards will start alongside Hamlin in the front row after posting a fast lap of 181.984 in the No. 99 Fastenal Ford.

Defending race winner Paul Menard qualified eighth at 181.014 in the No. 27 Menards/Nibco Chevrolet.

DANICA PATRICK (No. 7 GoDaddy.com Chevrolet): "It was pretty tight to start the race off, and my crew chief, Tony, is a pretty smart guy and took a pretty big swing at it on that first stop. The car was definitely better, and we were working our way through after that rough restart, picking the wrong lane there, and so it took us a little while. But we were picking them off one by one and got up to the 98 (Sorenson) and into (Turn) 1, and he slowed it down quite a bit, and I was pretty hard on the brakes. And I think I just tapped him a little bit, and when I did, he slid sideways. I tried to go around him and didn't quite get by him and spun around, and unfortunately that was it. I am sorry if I did anything to affect his day, but I didn't mean to."

JOEY LOGANO (No. 20 GameStop/Damage Inc. Toyota): "We didn't do very good this weekend. We were just slow from when we unloaded. We tried to make some improvements here and there. We just never did. We got a little better here and there, but nothing good. It's kind of frustrating we couldn't run with the fast guys. We were just battling back there, battling for track position because you can't pass a car on this racetrack to save your life. It just makes it real difficult."

JOHANNA LONG (No. 70 KeenParts.com/Riley Chevrolet Chevrolet): "It was definitely an experience. It was a lot of fun racing here. It's hard to pass, but we had a really good car. We just got struggled up with the drive shaft. There was nothing we could do about it, but I'm really proud of these guys for never giving up. We have a lot to work on, though. It's something to gain on, and I'm really proud of it."

RICKY STENHOUSE JR. (No. 6 Sam's Club/Cargill Ford): "Yeah, it was (busy racing). When somebody bobbles a little bit, it kind of slows everybody up, then we get going three-, four-wide. That gets interesting. All in all, it was a decent day in our Sam's Club Mustang. It wasn't what we expected. It wasn't what we were wanting to do, but we finished ninth. We'll go on to Iowa next week, and we'll just have to take a look at everything that we got on this thing and see what the deal is. It's just not as good as we wanted." (On the racing at the Speedway): "It's cool racing here. I'd probably think a lot better if we'd won."

AUSTIN DILLON (No. 3 Advocare Chevrolet): "On that first run, we really had something to race with. Just too tight all day, and when I hit the wall, it just made it worse. I hit the wall and really hurt our car. I was good early, though. It was really fun, though. Drafting dictated who got the lead, who you were running behind. It was different racing the first time we were here, so it's going to be a learning experience, but even with that it was a decent race."

DENNY HAMLIN (No. 18 SportClips Toyota): "It was a solid day, but we were just too loose all day. Just couldn't do anything, especially on restarts, and that's when you need to be fast. Once you solidify your spot after about three or four laps, then you just cruise there the rest of the race. It's a tough balance because these cars just don't have enough horsepower to make runs off the corner, so you are kind of stuck with it and you got to be good for a couple of laps and hold your position. Great day for us, but a top-five was not what we were wanting. But still a decent day."

JEFFREY EARNHARDT (No. 39 FastWax.com Chevrolet): "We fought the tightest race car ever for the longest time at the start of the race. Then we finally got it a little bit better. We were just down on power. Everybody has these bigger motors, and we're running the SB2s. It's the best we had. I'm just glad to be out here. I want to thank all the guys who came on board and helped to get us out here at the last minute."

TRAVIS PASTRANA (No. 99 Boost Mobile Toyota): "Crazy. I mean, this is the biggest, fastest track that I have ever driven. It's the fastest that I've ever been in a car, and it's just an honor to be here. Really, I was nervous. I had really very little confidence coming in. We still got a lot to pick up on, and I learned so much about drafting. This was my first track that the draft really played a huge role in, and on the restarts, I was just a fish out of water. Everyone was going by, and I was like: 'OK, what just happened? I don't understand.' then I would have to try to pick back through. But they did a good job. They really got me out front. The cars I was racing against are all my heroes, so it was very cool."

MICHAEL ANNETT (No. 43 Pilot/Flying J/M&M's Snack Mix Ford): "It was a battle to get up front. This place is really tough to pass. Starting 21st and battling to finish sixth and bring home this Nationwide Series Dash for Cash money is awesome. It's really, really tough. There are so many chances to screw up here. It is really hard to put together a whole lap, and it took me till about Lap 20 to 30 to really start doing that and then start being able to pull it off and figure out what I need to do to pass cars, which is the hardest thing to do here. I put a lot of notes in the book for late in the race, and we used it and put ourselves in a position to get this check."