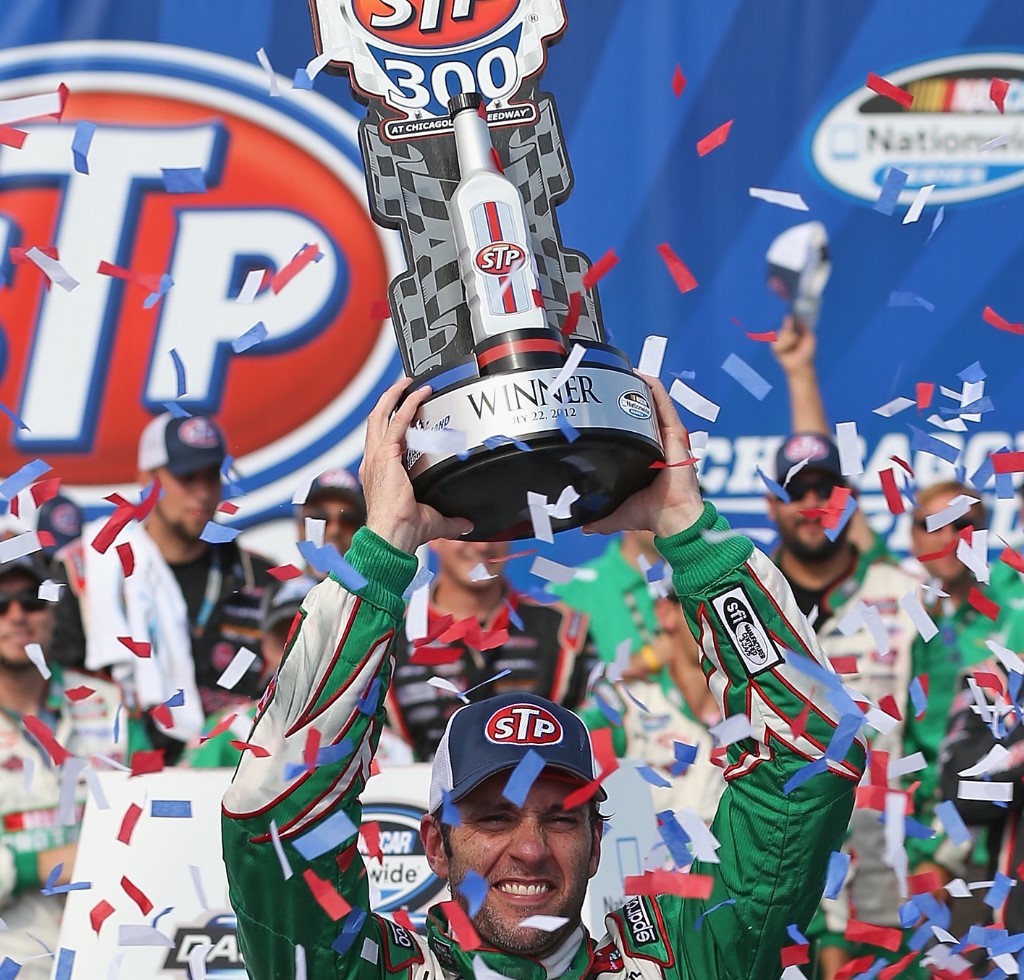 With the NASCAR Sprint Cup Series taking their final weekend off of the season, there was a major opportunity for the Nationwide and Camping World Truck Series to rise, shine and take over the sport's center stage at the Chicagoland Speedway last weekend. Both series did exactly that. It just took them until the end of the race to show it to the rest of us. Despite a debilitating illness, Elliott Sadler certainly rose to the occasion in the Nationwide Series and, in the truck series, James Buescher practically rose from the dead to enjoy his shining moment in victory lane. With those thoughts in mind, let's begin with:

THUMBS-UP to Elliott Sadler for rising above a severe case of the stomach flu in order to win the STP 300 NASCAR Nationwide Series race. Sadler went two days without solid foods and even flew his personal doctor in to help him with the illness.

Throughout much of the afternoon this race had all the characteristics of a genuine snooze festival until the final laps. Sadler was leading the race with Ricky Stenhouse Jr coming on strong in second. Stenhouse had already led a race high 135 laps and he clearly was gaining on Sadler in an effort to take back what he felt was rightfully his. The question remained: did he have enough laps to set up a winning pass?

WHAT'S-UP with Sam Hornish Jr answering that question for Stenhouse? With eight laps remaining in the race, Hornish was in a three way fight for ninth place when he accidentally tapped the rear bumper of Kyle Busch's Toyota. In turn, Busch collected Brendan Gaughan and they both slammed hard into the wall.

THUMBS-UP to Hornish for immediately coming over his radio to forward apologies to both drivers while taking full responsibility for the accident. Hornish later said he was distracted by what appeared to be loose hood pins on the front of his car and when he looked up again he was into Busch's bumper.

WHAT'S-UP with what Sadler must have been thinking after all of this happened? With a late race dog fight with Stenhouse already developing, he absolutely didn't want to see a yellow caution flag.

THUMBS-UP to Justin Allgaier for that surprise assist when the green flag flew to launch the green-white-checker finish. Lined up in third behind the race leader, Allgaier literally pushed Sadler past Stenhouse and that actually turned out to be the winning move.

THUMBS-UP to Sadler, for winning his third race of the season as well as the Nationwide Dash 4 Cash bonus for being the highest finisher of the four eligible drivers in the program.

THUMBS-UP to the ESPN Network for editing some of Kyle Busch's radio transmissions. This driver was having a terrible day with handling problems and every pit road adjustment that the team tried just didn't seem to work. Sensing what they were going to hear from this driver's radio, ESPN first recorded the comments and then bleeped out the offensive language before playing the comments on live television. It was a far better effort that what we've heard in recent weeks when "F" bombs were bursting all over the airwaves followed by embarrassed broadcasters apologizing for them.

THUMBS-UP to Kyle Busch for declining a post race interview. There are times when a driver simply doesn't need to be in front of a live television camera. After the day that he endured at the Chicagoland Speedway, this was definitely one of those times.

THUMBS-UP for Herman The German's fourth place finish. Kenny Wallace returned to the Nationwide Series in the Robby Benton owned #09 Toyota. The team is still seeking sponsorship programs to keep the wheels rolling. Wallace drove his guts out to get the team that top five finish and that effort will hopefully help their cause.

Buescher and his team also gets the making chicken salad out of chicken do do THUMBS-UP this week. During the early part of the event they had to change the truck's carburetor. Buescher returned to the race a full two laps down. However, with some rock solid driving and some help from a lucky dog pass, Buescher was where he needed to be at the end of the race.