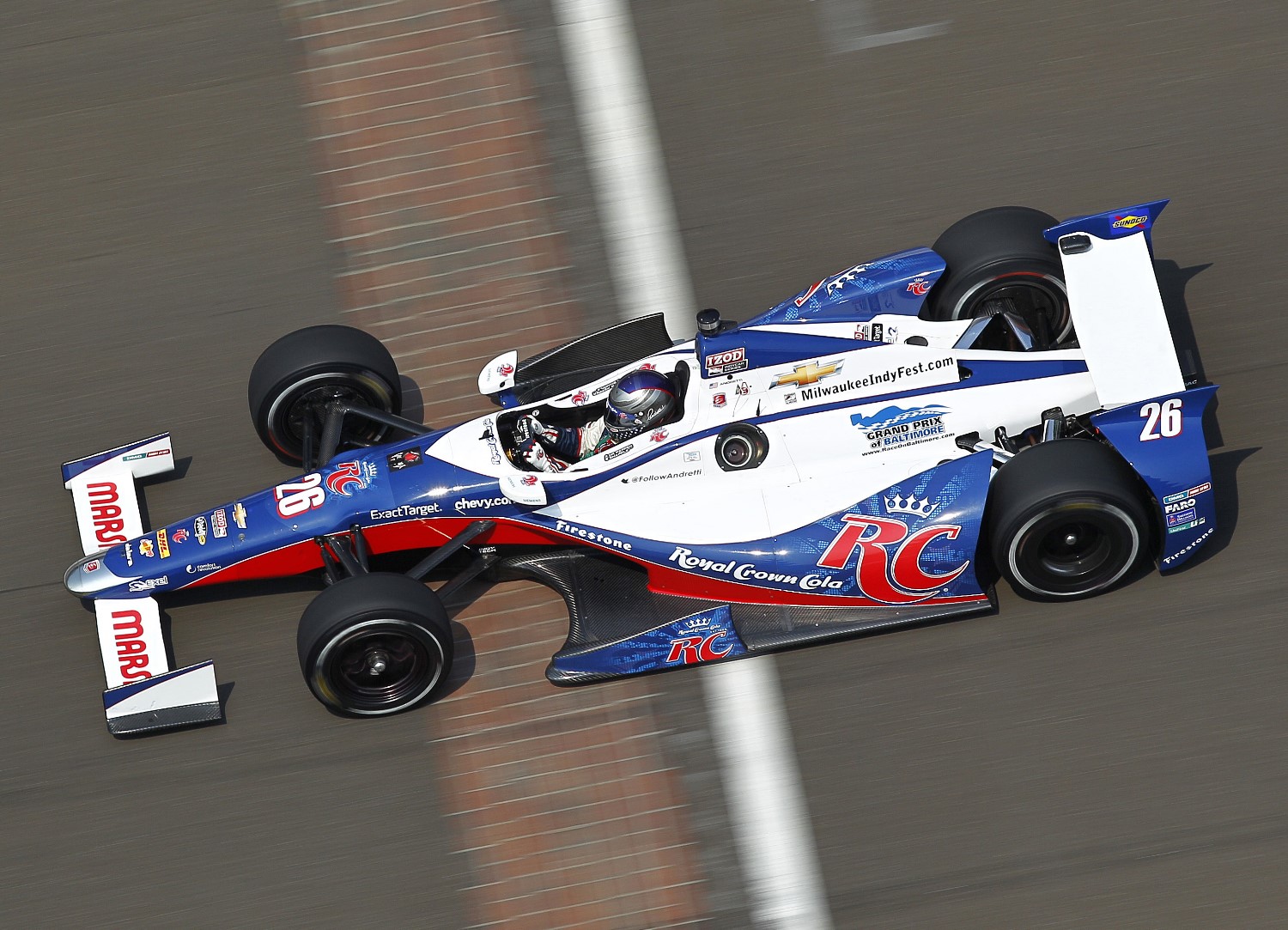 If there was ever any doubt that the Indianapolis 500 Mile Race is still the Mt. Everest of motorsports, it is gone after today's record-breaking event. Yes, I have a few gripes about the DW-12 chassis and the lame, new re-start procedures. We'll get to those in a moment. But the race itself was a sight to behold.

Here are my random thoughts on this year's Greatest Spectacle in Racing:

I really thought that Marco Andretti was going to run off with this race, but he was the victim of an ill-timed yellow flag that put him at the back of the pack. This set off a chain of utterly predictable events that began with Marco driving hard to make up lost ground, then crashing, and then blaming someone else.

This time the alleged perpetrator was Oriol Servia in the Mecum Auctions car, who had the gall to race Andretti side by side into a turn. The nerve of that guy. He must have thought he was in an automobile race.

The DW-12 chassis still exhibits the same basic characteristics it's always had. It understeers into the turn and oversteers on exit. Some people say this is a bad thing. I say it's not. Who wants a car that is perfectly balanced for everyone all the time? Yawn. We're already stuck with underpowered spec cars with hand clutches. They should at least be a little challenging to drive.

New record today for the most passes for the lead in the history of the Indy 500. The fans loved it. The roar from the stands when Tony Kanaan took the lead late in the race was astounding.

A fantastic crowd showed up and the stands were over 90% full even along the backstretch and into Turn 3. I spent most of the race at the entry to Turn 4. The fans were abundant and rabidly enthusiastic despite soaring temperatures.

During the darkest days of The Split, the hard-core race fans still showed up while the Indy 500-only fans stayed home. They were the fans that didn't attend any other race and only showed up to attend the biggest show on earth. But now they're back. Big time.

The Lotus cars should not have been black flagged early in the race for being “too slow." We don't need a 105% rule to artificially eliminate anyone who doesn't race in the same speed bracket as the leader. It's redundant.

We already have a “fastest 33 cars" rule. It makes no difference how fast the leader is, how slow the final qualifier may be, or the difference in speed between them. The fastest 33 cars race. Everyone else goes home. That is our “105% rule" and we don't need another one. The Lotus cars earned their way into the race and that's that. Black-flagging them ruins the spirit of auto racing.

Besides, the whole field was running at nearly identical speeds at Las Vegas in 2011 and we all know how that turned out. Watch what you wish for.

The new rule mandating that the pace car remain on the track until seconds before the green flag comes out (instead of pulling into the pits one lap before going green) is a disaster. The leader would invariably wait as directed for the green flag before accelerating, while everyone behind him got caught up in the “accordion effect" and squirmed all over the track to avoid rear-ending the car in front. It was a mess. For the first 180 laps of the race, the front-runner lost the lead and shuffled back three or four positions almost without exception.

This is yet another example of the series creating more problems than it solves by over-regulating the race. The decision as to when and where to begin accelerating belongs to the leader, and to him alone. Get the pace car off the track and let the leader do his job.

James Hinchcliffe consistently used up more racetrack than anyone else, drifting within a few inches of the wall when exiting Turns 2 and 4. This means 1) he's a BFS (Big Freaking Stud) who's not afraid of a concrete wall, 2) his team trusts him enough to strip the downforce out of his car and leave the race in his hands, and 3) Hinch is probably as good as advertised (which is not to be taken for granted).

I told you after the season opener at St. Pete that Takuma Sato was going to win a race in this series sooner than you think. It should have happened today. Taku was smoking fast and drove extremely well.

On the final lap of the race, Dario Franchitti blocked Sato nearly to the inside wall as they headed for their race-deciding crash. By the time Dario moved slightly back toward the middle of the track to save face, Sato’s line was ruined. A terrible entry angle on the upcoming corner left him with no chance of completing the pass and making it through the turn.

In Dario's defense, the Indy 500 is the world's biggest stage and second place counts for nothing.

And let's face it… the odds of Dario drawing a blocking penalty on the last lap at Indy were roughly the same as Michael Jordan's chances of being called for an offensive foul in the NBA finals.

That'll be the day.

For his part, Sato had worked for three laps to set up that pass attempt. It was the last lap of the world's greatest auto race. Yes, he had to try. If his car had stuck through the corner – and it nearly did – he was going to win the Indy 500. If he had lifted to avoid any risk, he'd never have gotten another shot at passing Dario in the remaining three turns. Sato did the right thing. Sato did the only thing.

Dario's move was questionable at best. Then again, he hasn’t won three bottles of milk by pulling over.

It is amazing how quiet these new Indycars really are. The oval tracks are generally a bit louder than the natural-terrain road courses, yet I could sit ten rows from the track surface in the north short chute without earplugs and carry on a conversation with my two sons who sat beside me.

â€¢ Dario Franchitti, who drove from 16th to 1st. That's not an easy trick even for a guy who has the best ride in the field. Three Indy wins, four series titles and Ashley Judd. Must be living right.

â€¢ Ed Carpenter, who drove from 28th to 3rd despite a broken nosepiece that badly unbalanced his racecar. Instead of backing off, Carpenter earned a permanent BFSB (Big Freaking Stud Badge) by hammering the throttle and passing his way into the top five with a wildly loose racecar until it finally gave up and spun. He nearly won the bloody race. Please note that this particular BFSB is a lifetime award.

â€¢ Oriol Servia, who drove from 27th on the grid to 4th. He didn’t have the best car, his Mecum Auctions sponsorship didn’t come through until 3 days before the race, and he had no experience with his new Chevy engine. But he hustled the car through traffic over the last 20 laps and worked his way to a Top 5 finish. That’s studly.

â€¢ Takuma Sato, who chose to crash rather than lift and give up his chance to win auto racing’s biggest prize. At the moment of truth, Taku didn’t blink. I like a guy who swings for the fence.

Okay, busy week coming up. An exciting new announcement coming from Sopwith Motorsports Television Productions this week along with a visit with the new owners at Bloomington Speedway. Then I hit the road on Friday for a weekend Super Cup race at West Virginia's Ona Speedway.

I'll tell you all about it when I get back. Have a great week and wish me luck.