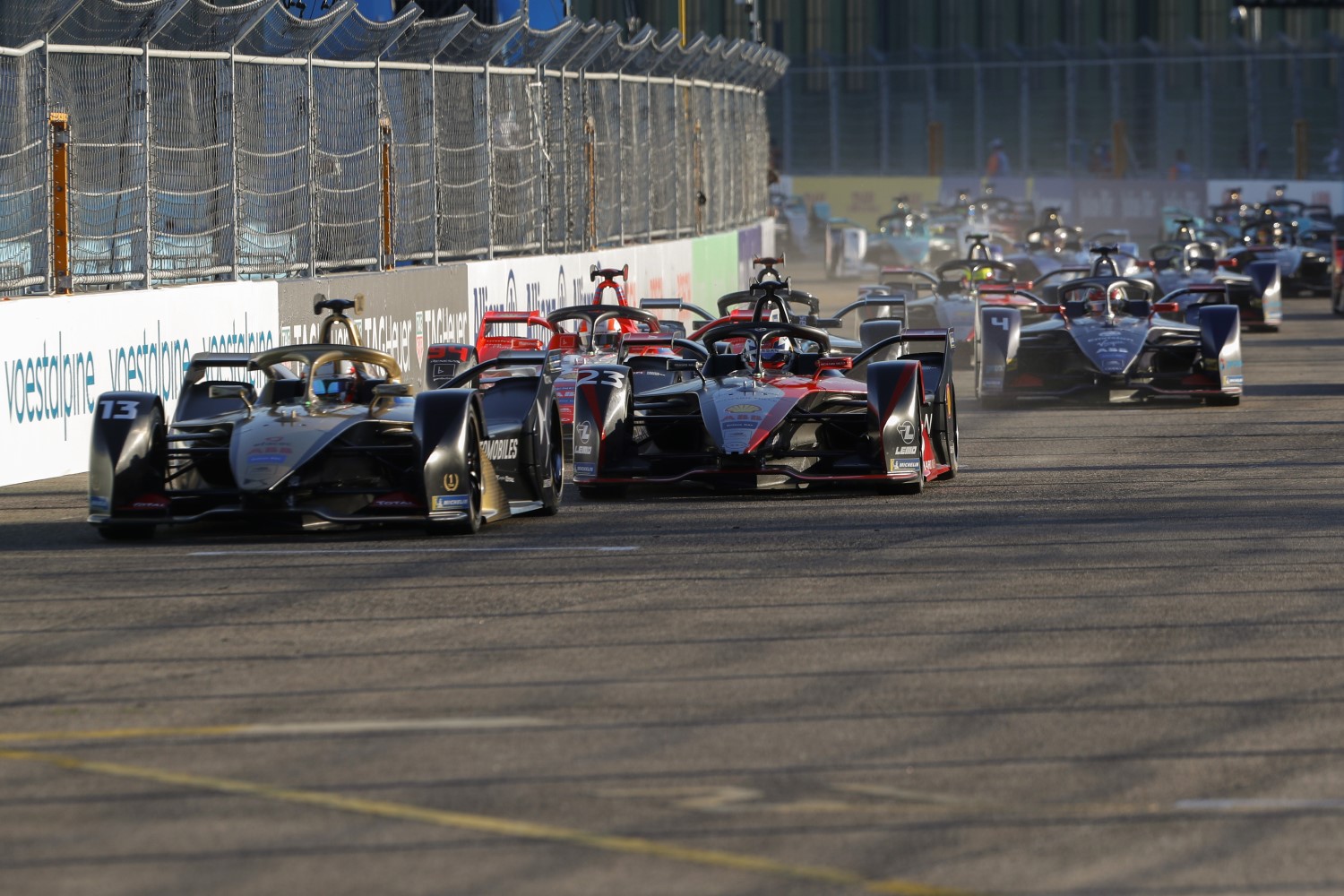 Antonio Felix da Costa and his DS Techcheetah team schooled the rest of the Formula E field for the 2nd day in a row to win Round 7 of the 2020 Formula E season in Berlin on a Thursday evening. It was his third Formula E race win in a row.

Robin Frijns and Stoffel Vandoorne rounded out the top-5.

“I am pleased with the effort," said Buemi. “Antonio da Costa is doing a great job, he’s been very consistent in the past few races and managed to get the best out of his car.

“I am happy to have been able to bounce back today and thanks to my team I did a good job during qualifying, Super Pole and the race.

“I can’t compete against Antonio at the moment. They are in a different class right now."

[adinserter name="GOOGLE AD"]The DS Techeetah driver extended his championship lead to 68 points, keeping Sebastien Buemi (Nissan e.dams) at arm’s length throughout the encounter, whilst Lucas di Grassi (Audi Sport ABT Schaeffler) came out on top in the battle for the final step on the podium.

Da Costa again started well, and immediately covered Buemi into the first corner. Nyck de Vries (Mercedes-Benz EQ) produced a flyer off the line and was late on the brakes into turn one, passing Alex Lynn (Mahindra Racing) for third in a cloud of tire smoke, right around the outside.

Max Guenther (BMW i Andretti Motorsport) had been the big climber in the opening stages, making a trio of moves to find his way into eighth position by lap two.

We were denied the opportunity to see the racy German make further progress, however, when his iFE.20 picked up a puncture on lap nine. The team later retired the car – Guenther seeing his championship challenge begin to ebb away.

The lead duo stretched their legs out front, pulling out two seconds on de Vries behind as the Mercedes-Benz driver continued his duel with Lynn – his mirrors full of the Brit’s Mahindra M6Electro.

Fifteen minutes into the race, and none of the Drivers’ Championship top five, apart from standings leader da Costa, of course, were in points-paying positions – music to the DS driver's ears.

In the battle for sixth spot that raged all the way through the race, Oliver Rowland (Nissan e.dams), Sam Bird (Envision Virgin Racing), Lynn and Edo Mortara (ROKiT Venturi Racing) all leapt for ATTACK MODE, but the Mahindra man miscued, leaving Lynn exposed as those around him benefited from the extra 35 kW of usable energy.

Audi Sport ABT Schaeffler’s Lucas di Grassi had made his way by de Vries for fourth on lap 11, and the pair responded to the group just behind by hitting the activation zone themselves. The Brazilian made it count – getting the jump on third-placed Frijns as the Dutchman was a lap late to the ATTACK MODE party.

The third full-course yellow of the evening was caused by de Vries’ stricken Silver Arrow 01, after two prior cautions for the collection of some rogue debris, forcing the Dutchman out of the action – a real shame for the 25-year-old, who had looked feisty.

On the restart, da Costa was able to create a two-second cushion to the Nissan of Buemi behind – enough to see him able to take ATTACK MODE and retain his lead with 20 minutes left to run. It looked a done deal.

Vandoorne, as in Round 6, was quietly going about his business climbing through the field from 13th, this time around. On lap 22, the Belgian pulled off an audacious three-wide move on Rowland and Bird to go right around the outside of the pair of them and into fifth spot with Frijns the next in his sights.

Frijns, meanwhile, was scrapping hard with di Grassi for the final spot on the podium, as the Brazilian employed all of his experience to fend off Frijns' advances – the pair very evenly matched, both running the Audi powertrain.

The two yo-yoed back and forth as they activated ATTACK MODE one after the other for the second time, and it was a straight fight to the finish with Frijns clambering over the back of the Audi for every one of the final five laps.

Vandoorne joined the gaggle with two laps left, as did Bird, to make it four into one for the final step on the podium. Di Grassi’s experience and guile served him well, however, as he clung on for silverware with Frijns, Vandoorne, Bird and Rowland following.

Vergne’s frustrations were clear for all to hear, with complaints that he was losing his rear tires ringing around his engineer’s ears with just under ten minutes plus one lap to run.

The Frenchman’s pace, as in the first running of the Reverse Berlin Tempelhof Circuit, fell away towards the end of the race, with Mortara pinching eighth and Andre Lotterer ninth with Vergne winding up 10th.

The reigning champion is yet to unlock the DS Techeetah in the same way his team-mate so spectacularly has so far in Berlin.

Da Costa held Buemi at bay to take the win and his dominant performance sees him extend his championship lead to 68 points over both di Grassi and Vandoorne, with 120 left to play for. DS Techeetah’s advantage in the Teams’ running is now 65 points to BMW i Andretti Motorsport.

“This was really hard," said da Costa. “Seb (Buemi) kept me honest all race. Yes, we were a little bit quicker, but there wasn’t a moment where I could stop looking in my mirrors.

“During ATTACK MODE, it was tight, and he was fair and left me some space. We had some battery temperature issues but the team helped me out with the right info, and we managed it.

“These days, and this momentum, is rare. I know how hard they are to come by and I’m so happy right now.

“I’m thinking day-by-day. We’ve got four races in quick succession. We’ll see people get closer and closer and I’m expecting it to keep getting tougher."

The second double-header of the most intense season finale in motorsport history, Rounds 8 and 9, will see a return of the Traditional Berlin Tempelhof Circuit, set for Saturday and Sunday, August 8 and 9.