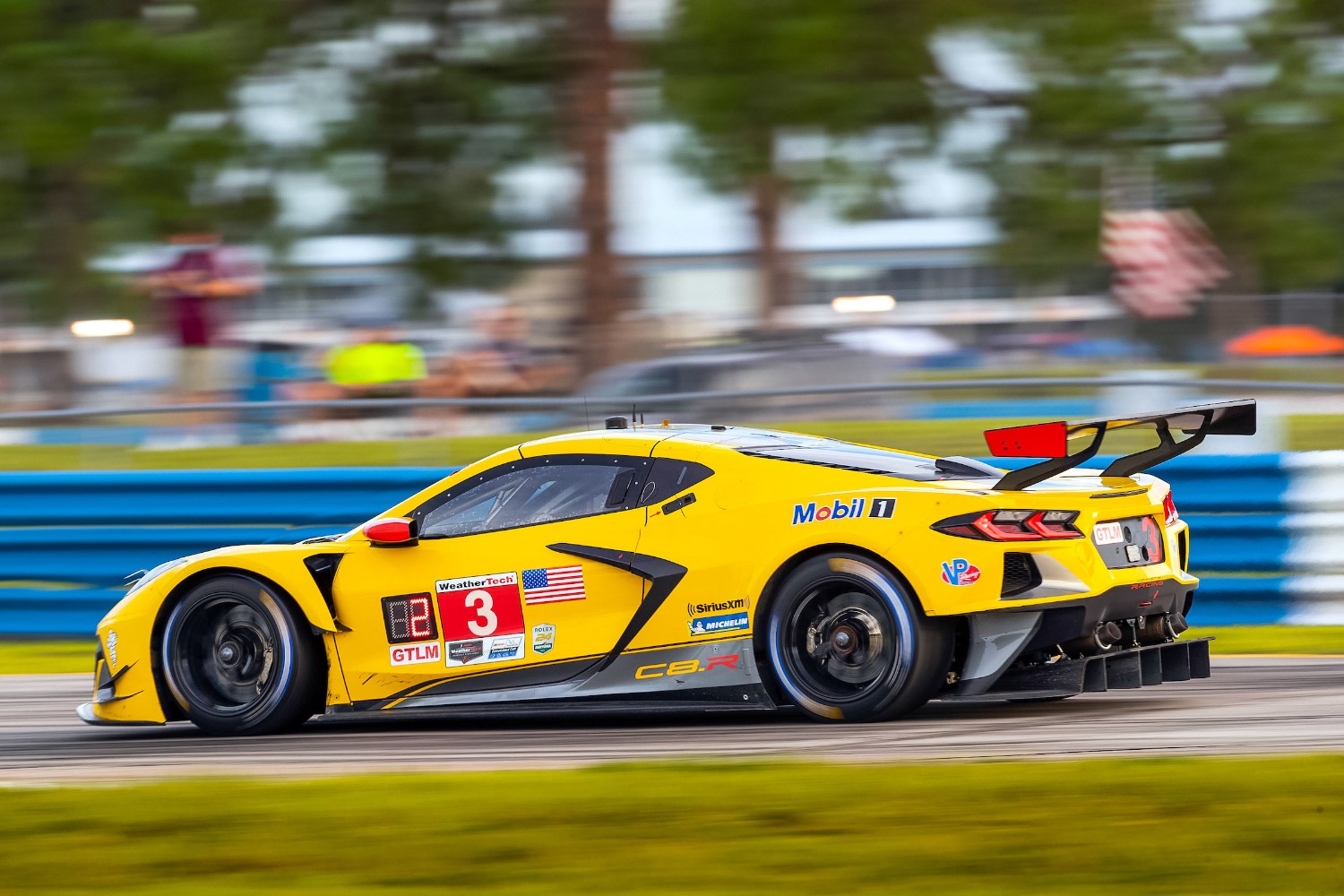 DETROIT – Corvette Racing will ride a two-race winning streak in the IMSA WeatherTech SportsCar Championship into one of North America’s greatest tracks: historic Road America. The program will look to extend its GT Le Mans (GTLM) championship lead in the class’s Manufacturer, Driver and Team categories before a national NBC audience Sunday afternoon.

The first-year, mid-engine Chevrolet Corvette C8.R has been on a roll following the IMSA shutdown due to the COVID-19 pandemic. The work done by the whole of Corvette Racing – drivers, crew and Chevrolet and team engineers – has been evident with back-to-back class victories and pole positions at Daytona and Sebring earlier this month.

Antonio Garcia and Jordan Taylor arrive at Road America carrying the GTLM Driver’s Championship lead on the strength of a victory at Daytona in the No. 3 Mobil 1/SiriusXM Chevrolet Corvette C8.R. That win was the first for the mid-engine racing Corvette and also was Corvette Racing’s 100th in IMSA competition. Garcia and Taylor also were runners-up two weeks ago at Sebring, where Taylor also set a GTLM track record en route to pole position.

[adinserter name="GOOGLE AD"]He and Garcia finished second in class at Sebring behind winning teammates Oliver Gavin and Tommy Milner in the No. 4 Mobil 1/SiriusXM Corvette C8.R. The paring claimed Corvette Racing’s most recent Road America victory: 2016 when Milner passed five cars in the last 15 minutes. Milner set the fastest race lap a year ago, and Gavin leads all active IMSA drivers with four class victories at the 4.048-mile, 14-turn “National Park of Speed."

The 2020 Chevrolet Corvette Stingray will serve as Official Pace Car for the IMSA rounds of the WeatherTech Championship and Michelin Pilot Challenge at Road America. Named by MotorTrend as 2020 Car of the Year, the 2020 Stingray is Chevrolet’s first mid-engine production Corvette. It features a 6.2-liter V8 engine with an output of 495hp, goes from 0-60 mph in less than three seconds and achieves a top speed of 194 mph.

Both the Corvette Stingray and Corvette C8.R were developed simultaneously with a deeper level of technology transfer between the race car and a production Corvette than ever before, which helps contribute to many of its advancements. As a result, the C8.R shares the highest percentage of parts between the production and race car than any previous generation.

The IMSA WeatherTech SportsCar Championship at Road America is scheduled for 12:05 p.m. ET on Saturday with live network coverage on NBC plus streaming options on the NBC Sports App. IMSA Radio will broadcast all practice and qualifying sessions as well as the race on IMSA.com, which also will host live timing and scoring.

ANTONIO GARCIA, NO. 3 MOBIL 1/SiriusXM CHEVROLET CORVETTE C8.R: "It will have been two years since I drove the C8.R for the first time at Road America. Things have improved so much on it since that day. It will be very nice to go around and feel how far the car has come. Road America is one of my favorite tracks in the IMSA championship. I'm pretty sure this car will make a difference in our results from past years. I'm looking forward to seeing how we perform. If a car is good, it makes going around Road America that much more fun."

JORDAN TAYLOR, NO. 3 MOBIL 1/SiriusXM CHEVROLET CORVETTE C8.R: “When people talk about Road America, you're talking about long straights, big brake zones and a lot of high-speed corners. Looking at what we experienced with C8.R in testing and racing at Daytona and Sebring, the car seems to suit a lot of different types of corners. It will be a lot different from our experiences at Daytona and Sebring with the layout of the track and how it flows. The Corvette should suit Road America quite well. It's very well-balanced, drivable and predictable. This is a place where you're on edge at a lot of parts around the track. You want to be comfortable with your car and trust in it. You have to do that lap after lap."

OLIVER GAVIN, NO. 4 MOBIL 1/SiriusXM CHEVROLET CORVETTE C8.R: “We will have that little bit less racing experience under our belt going to Road America than we thought we would have when we were looking at the schedule at the start of the season. Road America is a great track with a lot to really like and enjoy about it. It's a driver's favorite for sure. You go up and down the pitlane and everyone raves about it. It generates great racing. Having tested the Corvette C8.R there for the first time and now what we've achieved with the team and our partners at Michelin, I think we'll have a solid car there and it's something I'm really looking forward to driving in and competing with."

TOMMY MILNER, NO. 4 MOBIL 1/SiriusXM CHEVROLET CORVETTE C8.R: "It's crazy that it's been two years since we drove the C8.R for the first time. I'm definitely excited to get back to Road America. I didn't have a lot of laps for that first test, but I still remember it pretty well. Obviously, the C8.R has moved on development-wise quite a bit since that first test. It's not like we're going there with a completely brand new car, but going there with the testing we've done, the racing we've done and knowledge that we've gained, it will be fun to back there with this new car. We were really excited at that first test with what the potential of what the car had to offer at that point and what it could be. Now with all the development that's gone on, that excitement hasn't gone away. It'll be fun to go back to Road America with this car that has moved on with all the updates we've done. Any opportunity to drive a race car like this after the five months is exciting for sure. It's even better go drive it at a place like Road America."