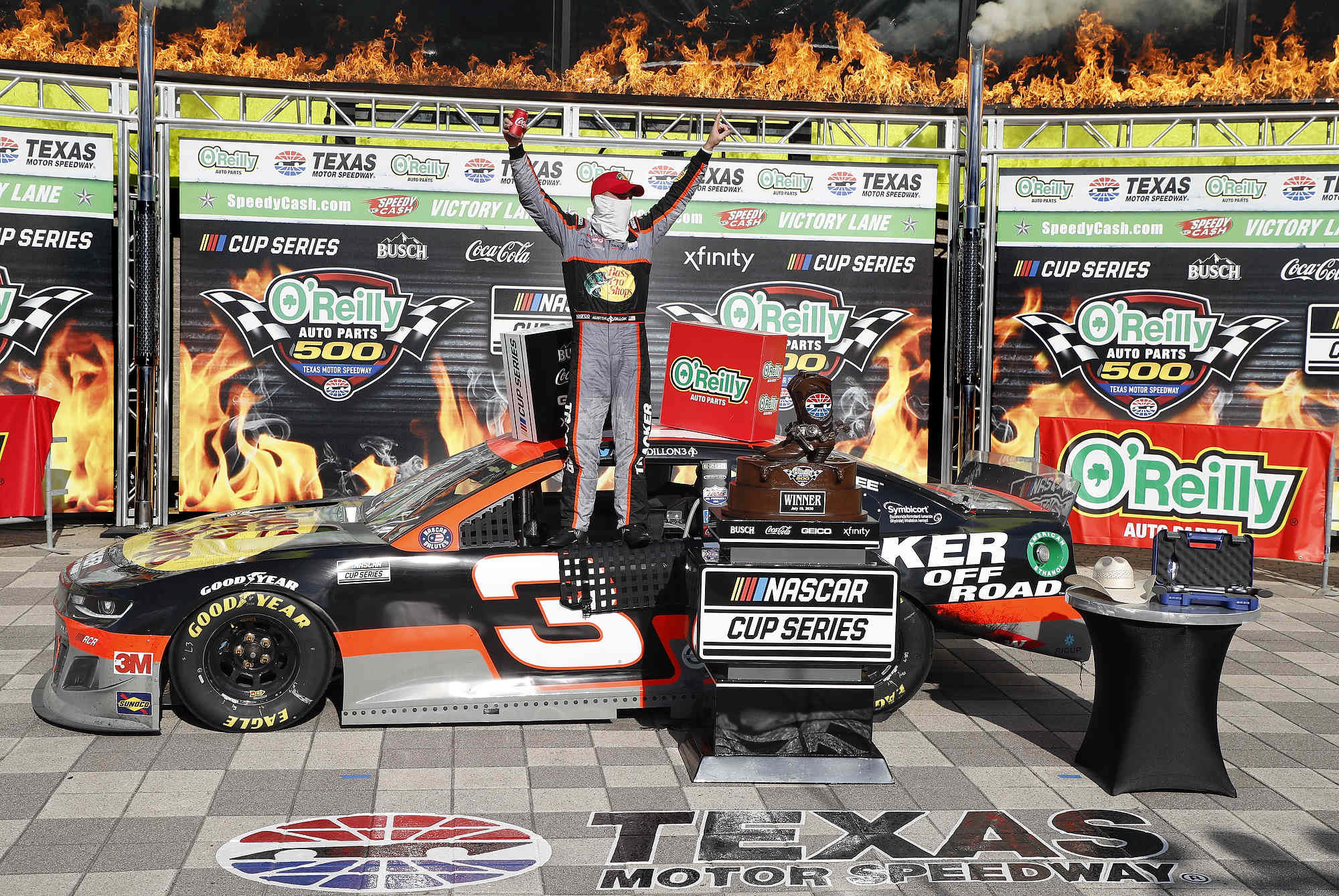 Austin Dillon rose to the top in the final exchange of pit stops then outlasted rookie teammate Tyler Reddick on Sunday at Texas Motor Speedway, netting his first victory of the NASCAR Cup Series season.

Dillon led 22 of the 334 laps in the Richard Childress Racing No. 3 Chevrolet, shaking up the playoff picture by sealing a postseason berth. His first win at the 1.5-mile Fort Worth track was the third of his Cup Series career.

Seven-time series champion Jimmie Johnson registered his sixth straight finish outside the top 10 after a Stage 2 scrape of the wall and a pit-road penalty sent him several laps in arrears. He finished 26th in the No. 48 Hendrick Motorsports Chevrolet.

A major stack-up shortly after the start of Stage 3 forced a red flag, knocking teammates and early leaders Martin Truex Jr. and Kyle Busch from contention. Almirola’s contact with Busch’s No. 18 then hooked Truex’s No. 19, clogging the track near the entry to Turn 1. Cole Custer, Ryan Preece, Matt Kenseth and Chris Buescher were among the others involved.

Dillon, 30, grandson of NASCAR Hall of Fame team owner Richard Childress, was emotional after the win, screaming “thank yous" into his team radio and then dedicating the victory to his wife Whitney and their one-month old son, Ace, back at home in North Carolina.

“Not bad for a silver spoon kid, right," Dillon joked after climbing out of his No. 3 RCR Chevrolet, a reference to his upbringing in NASCAR’s brand of royalty and comment last year by Alex Bowman.

[adinserter name="GOOGLE AD"]“Tyler Reddick, he raced me clean. 1-2 for RCR. This has been coming. We’ve had good cars all year. I’ve got my baby Ace back home and my wife and I love them so much. I’m just so happy. Thank God. To tell you the truth, it means a whole lot [to be in the Playoffs] for the family, for all our of partners."

Erik Jones, Ryan Blaney, Kurt Busch, Brad Keselowski and Aric Almirola rounded out the top 10. Blaney led a race-best 150 of the 334 laps and swept the opening two stages, but it marks the second time he’s led at least 100 laps at Texas and didn’t get to collect the trophy.

Blaney and several other of the day’s frontrunners were making their way forward after green flag pit stops when a caution came out with 31 laps remaining for young driver Quinn Houff, who crashed while trying to get to the pit lane. That changed the complexion on the race and many of the afternoon’s best cars were then left to play catch-up while Reddick and Dillon were able to pit under caution instead of the green flag as the others had.

“Disappointing finish for sure," said Blaney, driver of the No. 12 Team Penske Ford. “Dominant car all day, especially on long runs. Really proud of that. Just unfortunate the way it ended for us."

“I’m proud of the speed we have and I feel like we can compete with the four and the 11 and those guys who have a lot of wins this year," he added.

Reddick acknowledged the track position was a huge help at the end. And runner-up is a career-best finish for the former two-time NASCAR Xfinity Series champion in the NASCAR Cup Series.

“We had to catch a few breaks," Reddick said. “Can’t ask for much more than we got there, me and my teammate on the front for the last couple restarts. He’s done this a little longer than I have and I’m a little bit rusty, haven’t been on the front row in a while.

“I just wanted it to be between us, not bring other cars into it and make sure we could fight it out," Reddick added. “We got the restarts and just kept getting opportunities and couldn’t get it done today. But hats off to the three guys. They work hard and this gets one RCR Chevrolet into the playoffs. We’re below the cutoff line, so we’ve got to keep fighting. If we can keep running like this, hopefully we won’t have to worry about points."

With his 11th top-five finish, Harvick now leads the NASCAR Cup Series standings by 91 points over Ryan Blaney in second.

IT’S BEEN 88 RACES SINCE AUSTIN DILLON GOT TO DO THIS – CELEBRATE WITH A WIN IN THE CUP SERIES. MAYBE THIS ONE A LITTLER SWEETER. YOU HAD TO DO IT ON THREE DIFFERENT RESTARTS WITH GUYS LIKE KYLE BUSCH, JOEY LOGANO AND KEVIN HARVICK BEHIND YOU. AUSTIN, THERE’S FANS THERE CHEERING YOU ON. HOW ABOUT THAT?

“Not bad for a silver spoon kid, right? I’ll take that. Have to thank everyone at RCR, ECR, Bass Pro Shops. Tyler Reddick, he raced me clean. 1-2 for RCR – this has been coming. We’ve had good cars all year. Justin Alexander and my whole crew. I got my baby Ace back home and my wife, I love them so much. I’m just so happy – thank god."

WHAT IS THE SIGNIFICANCE FOR RCR? WE STARTED THE DAY ASKING YOU ABOUT THE CUT LINE. NOW, YOU’RE ABOVE THE CUT LINE AND IN THE 2020 PLAYOFFS.

“To tell you the truth, it means a whole lot. Just for the family, for everybody, all of our partners. Truthfully, I’m out of breath right now. I’m about to go down, I need a drink. That was fun."

HOW ABOUT BEATING THE BEST IN THE BUSINESS? THREE STRAIGHT RESTARTS YOU HAD TO DO. YOU HAD TO EARN THIS ONE AUSTIN!

“Yeah, I had to change it up a couple of times. Definitely had to earn it. I changed it up. I waited the second one and I went on the last one. So, it worked out for me good."

“What a great day for Richard Childress Racing. This organization is working so hard and to have a 1-2 finish like we did is incredible. It felt like we had everything happen to our No. 8 Cat Oil and Gas Chevrolet, but strategy was king today. We had good speed overall and earned some stage points at the end of the first stage, but we got shuffled back for the majority of the second stage when we took two right side tires. That really messed with the handling of our Chevrolet and trapped us a lap down for a while. There were a couple major wrecks later in Stage 3 that we were able to miss and that helped us get our lap back to be able to contend at the end. My crew chief, Randall Burnett, made a great call to take fuel only during the caution with about 30 laps to go and that put us up front for those final restarts with our teammate, Austin Dillon. We really couldn’t ask for much more than what we got today. One spot better would have been great, but the recovery this No. 8 Cat Oil and Gas team made today was huge. We’re racing for the big picture of making the playoffs, so we have to race smart. Days like this will help us get there."

YOU GO FROM 41 BACK OF THE CUTLINE, TO 14 BELOW NOW, ENTERING THE NEXT RACE. HOW WOULD YOU DESCRIBE TODAY?

“It was not strategy in our Cat Oil & Gas Chevrolet. We had good speed in our Chevrolet ZL1 1LE, but we just couldn’t get our Camaro back in contention after we took right-sides (tires). It really shifted the balance of our Camaro. That just put us behind, and we had to catch a few breaks. Some cars got collected in carnage. We avoided it, but you can’t ask for much more than we got there. Me and my teammate (Austin Dillon) on the front row there in those last couple of restarts and you know, he’s done this a little bit longer than I have, and I’m a little rusty. I haven’t been on the front row in a while and he just snookered me those times. Kyle (Busch) was doing a really good job of pushing me, but that last one I put us in a big deficit and I just couldn’t get back out of it."

WAS IS GOING THROUGH YOUR MIND THAT YOU REALLY WANT THIS BUT MAN, THIS IS MY TEAMMATE AND THIS LOOKS GOOD TO RC?

“Well, I knew it was going to be important. There was one restart where I probably could have went to his inside and I just wanted it to be between us. I didn’t want to bring other cars into it and make sure we could fight it out. We just got the restarts that kept giving us the opportunities. Unfortunately, we just couldn’t get it done today. But, hats off to the No. 3 and all those guys. They’re working hard. It gets one RCR Chevrolet to the playoffs and now we’re below the cutline. We’ve got to keep fighting. If we can keep running like this, we won’t have to worry about points."