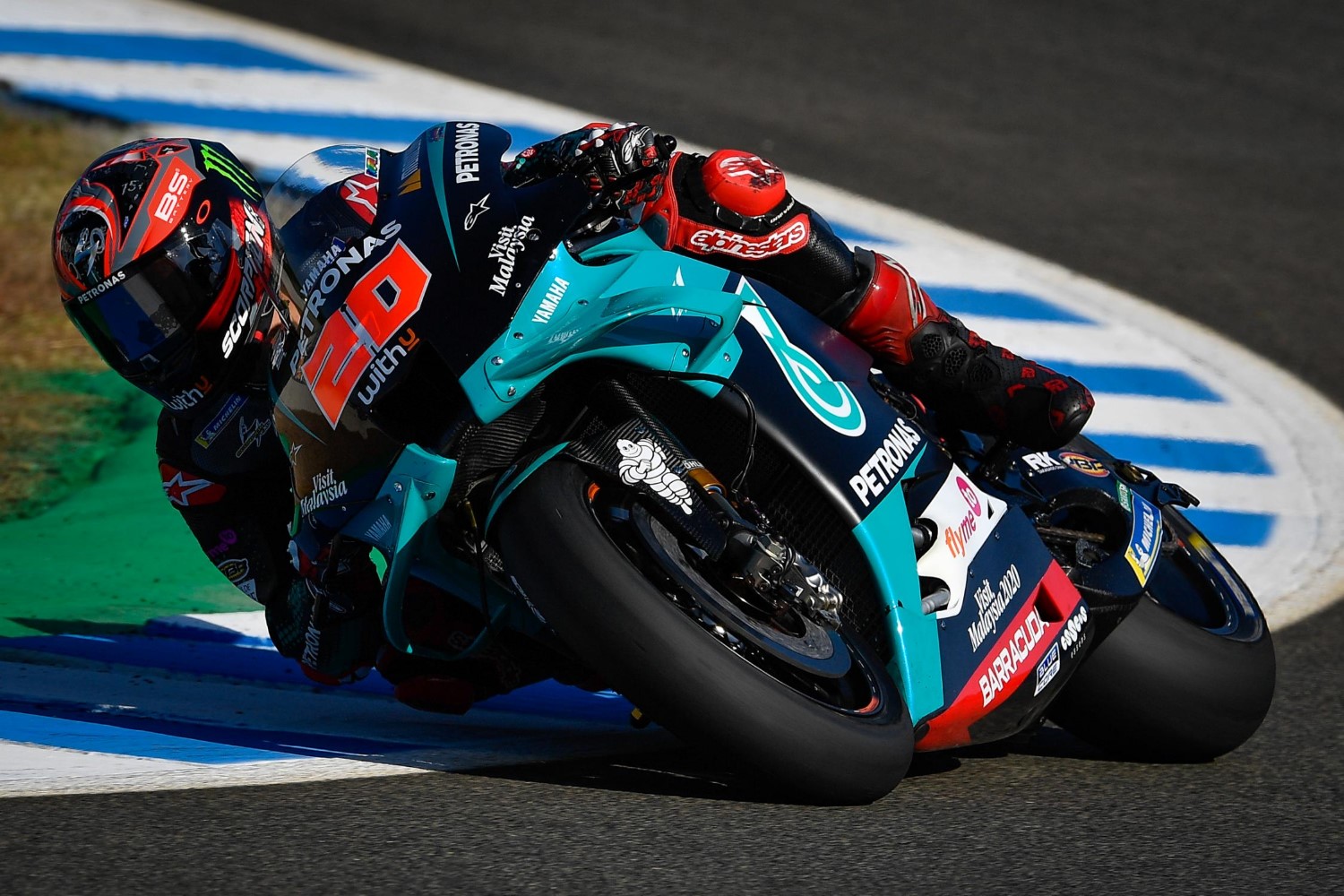 Fabio Quartararo claimed his first MotoGP victory – and France's first since 1999 – in a truly stunning and dramatic Gran Premio Red Bull de Espana. The Frenchman capitalized on a Lap 5 mistake from race leader Marc Marquez as we witnessed a monumental comeback from the number 93, before the reigning World Champion then suffered a huge crash at Turn 4 with four laps remaining. Maverick Vinales (Monster Energy Yamaha MotoGP) and Andrea Dovizioso completed the podium.

There are almost no words for what the Spanish GP has just thrown up. Marquez produced one of his mindboggling saves which saw him come back on circuit in P16 after leading, with Marquez then producing an all-time great ride that saw him come back to P3. However, with four laps to go, the Honda star suffered a huge crash at Turn 4.

With the pace at the front slow, the World Champion was anything but. In just five laps Marquez had managed to get himself from P16 to P10 and was lapping around a second quicker than most of the leading group, with Quartararo stretching away from Miller at the front. Lap 12 saw Marquez set a 1:38.3 – the fastest lap of the race – that was a good 0.4 faster than Quartararo, and even more than the riders in the podium hunt.

[adinserter name="GOOGLE AD"]Lap 13 passed by and doing the passing was Marquez, he’d got the better of Miguel Oliveira (Red Bull KTM Tech3) and a struggling Valentino Rossi (Monster Energy Yamaha MotoGP) to move up into P8. At this point, Marquez had a podium finish well within his grasp – quite remarkable. At the Lap 15 stage, Quartararo’s lead snuck past the two-second mark for the first time, but the shark music was playing as the cameras started to show an orange missile quickly making its way towards the back of the fight for the podium places.

With 10 laps to go, Marquez was a second quicker than third place Vinales. Marquez getting back into a podium position was now a formality rather than a possibility. With eight laps to go, Marquez was just two seconds away from the podium as he hunted and passed Franco Morbidelli (Petronas Yamaha SRT) and Bagnaia. Dovizioso was then passed, Marquez a full second quicker than the Italian and now, amazingly, Marquez had Miller and Vinales right in front of him – up the road, Quartararo was over five seconds clear.

So, Marquez vs Miller. Six laps to go, Turn 13 was Marquez’ chosen passing place on Miller but down the home straight, the Australian bit straight back at Turn 1. A man on a mission, Marquez was straight back up the inside at Turn 2 and made the move stick. Now, Vinales was next on the list – the rider right behind Marquez when the eight-time Champion ran off track at Turn 4.

Coming across the line with four laps remaining, Marquez was plotting his move into P2. However, there was about to be another twist – and a vast one at that. Coming out of Turn 3, Marquez was launched off his RC213V in a vicious way. Tumbling heavily through the gravel, Marquez was taken to the medical center – we’ll have updates on his condition as we get them.

At the front, Quartararo was untroubled in the latter half and he took an incredible maiden MotoGP victory. Behind, Vinales was able to grind out a P2 despite struggling with his front tire from “lap seven or eight". The battle for the final podium spot went down to the final lap. With two to go, Dovizioso made his move on Miller at Turn 6 to hold P3, with Morbidelli then almost crashing after colliding with Miller on the inside of the corner. This allowed Pol Espargaro (Red Bull KTM Factory Racing) through in P5 – the Spaniard in the fight all race – but Morbidelli would eventually get the better of Espargaro at the last corner, on the last lap. Vinales took P2 from Dovizioso, with Miller leading Morbidelli and Espargaro over the line with P2-P6 covered by 2.3 seconds.

Bagnaia couldn’t keep up the pace in the latter stages as the Italian slipped out of contention and finished P7, with Oliveira placing P8 – his equal best result in the premier class. Danilo Petrucci (Ducati Team) crossed the line ninth, with Takaaki Nakagami (LCR Honda Idemitsu) closing out the top 10.

A fall at Turn 3 while fighting for the podium has resulted in a broken right humerus for the reigning World Champion, who will travel to Barcelona for surgery.

After mounting an incredible comeback in the Spanish GP, Marc Marquez suffered a high side at Turn 3 and came down heavily on his right arm. As a result, the eight-time World Champion has suffered a transverse diaphyseal fracture to his right humerus. MotoGP medical staff have confirmed there is no other serious head or thoracic trauma but will remain under observation for 12 hours.

Marquez will travel to the Hospital Universitari Dexeus in Barcelona on Monday, July 20 and is aiming to be operated on by Dr Xavier Mir and his team on Tuesday, July 21st.

Recovery time is as yet unknown, the Repsol Honda Team will provide an update after the operation.