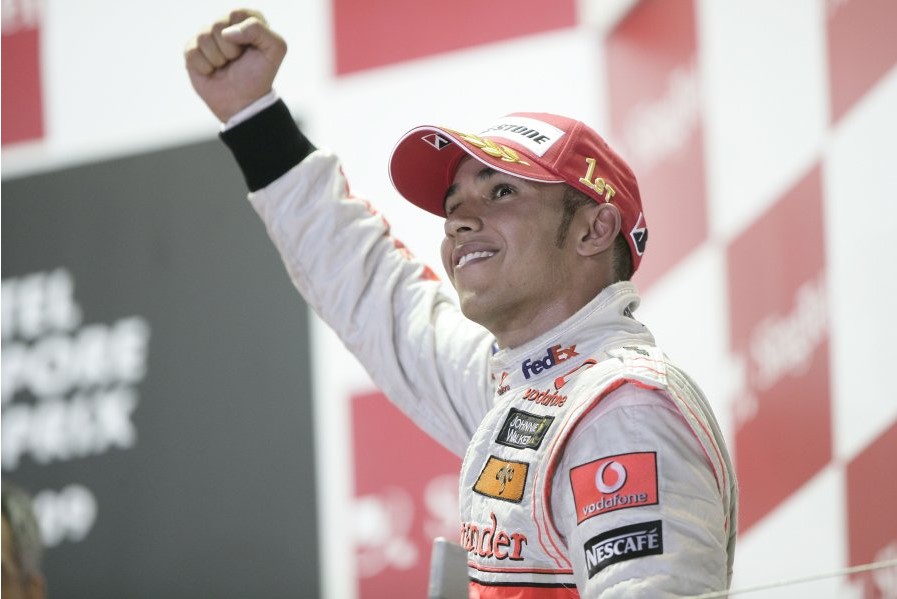 Championship leader Jenson Button extended his points advantage from 11th on the grid to finish fifth – one place ahead of his Brawn teammate Rubens Barrichello. Barrichello is now 15 points behind with three races to go.

Starting from pole position, Hamilton quickly established a slim lead over Nico Rosberg. Despite looking set to establish a greater advantage over his pursuers by virtue of his pitting later, his lead was eradicated by a Safety Car period, which coincided with Hamilton’s first stop. Nonetheless, he remained at the head of the field and withstood sustained pressure from Sebastian Vettel – who was running significantly lighter than Hamilton and was therefore able to push hard for the lead.

After making his final stop, and dropping to second behind Fernando Alonso, Hamilton resumed the lead once the Spaniard had made his final stop and maintained his advantage over the chasing Toyota of Timo Glock. This was Hamilton’s 11th grand prix win.

“This is the perfect end to a fantastic weekend," said Hamilton afterwards. “The race was physically very tough for all the drivers, but it was actually quite straightforward for me. I made a good start and I knew I was running longer than the guys behind me, so I was able to bridge the gap back to them. It was a very nicely controlled race in that way.

“The team did radio me about a small problem with KERS – but I didn’t have a problem in the cockpit and was able to just disable it and then re-engage it. It worked fine after that.

“We came here hoping for a good result – and I wanted to redeem myself after the last lap in Monza – and we got it!"

After an admittedly "disastrous" qualifying, Jenson Button moved another step closer to the world championship by finishing fifth in Singapore with fading brakes.

Sensing trouble for his Brawn teammate, Rubens Barrichello chased the ailing Briton hard in the closing laps but ultimately dropped another point behind Button with now just three races to run.

Barrichello's 15 point deficit means he needs to claw back more than 5 points to Button in each of the remaining rounds in Japan, Brazil and Abu Dhabi.

"I'm very happy with the result and I go to Japan next week feeling positive," Button told British television BBC.

His good mood was also motivated by the struggles of his other title rival Sebastian Vettel, who at one point was pushing race winner Lewis Hamilton hard for the lead.

However, the Red Bull driver then served a drive-through penalty for speeding in the pitlane, and carried to the flag damage not only to his floor after running awkwardly over a curb, but a missing side mirror.

The German did finish ahead of Button in fourth place, but his points deficit to the Brawn was reduced only to 25 points, leaving him with the unlikely task of clawing back more than 8 points at every one of the last three races in 2009.

The championship challenge of Vettel's Red Bull teammate Mark Webber ended definitively under the Marina Bay lights, as he crashed out of the race after 46 laps with brake failure.