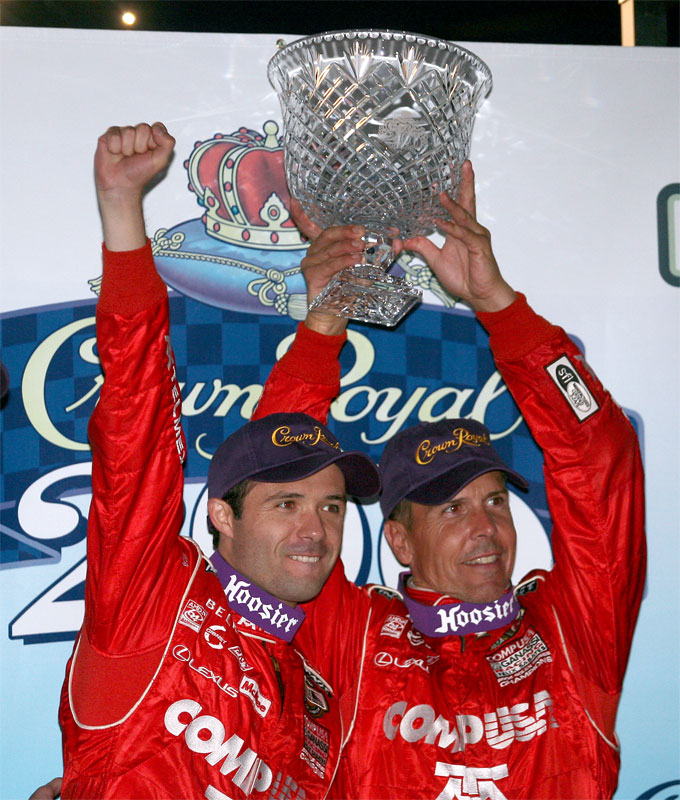 Pruett took over from Diaz during the fourth of six full-course caution periods on Lap 32 in second place, and passed Guy Cosmo in the No. 09 AMD/Spirit of Daytona Pontiac Crawford for the lead in the first turn on Lap 43 of the 82-lap race. He withstood several challenges from Max Angelelli in the No. 10 SunTrust Pontiac Riley over the remaining laps, and crossed the stripe 0.553 seconds ahead of Angelelli to run his Rolex Series overall victory total to 11. Pruett is the winningest driver in the history of the Daytona Prototype class and is just two victories shy of James Weaver’s Rolex Series record for overall wins.

“These Ganassi guys made such a great pit stop," said Pruett. “I think whoever made it out first, either us or the (No.) 10 car, was going to win the race. It’s been great the last three years between Max and me. He’ll race you hard and race you clean and he’s the best out here. We weren’t quite as happy in practice as we’d like to have been, but made some changes and were very pleased with the car during the race."

“It feels great to get this win," said Diaz. “The team put in a lot of great effort to give us a good car. As soon as I started to feel the car on the first few laps, I knew we had a car to win. The Ganassi guys took time to make good pit stops and I gave the car to Scott in good shape. He did the rest."

Angelelli and co-driver Ryan Briscoe wound up second, giving Angelelli his eighth-consecutive top-four result. Briscoe started the No. 10 car on alongside polesitter Alex Gurney in the No. 99 GAINSCO/Blackhawk Racing Pontiac Riley, and ran behind the second-generation racer throughout his stint. When the lead group of cars headed down pit road during a caution on Lap 33, Briscoe handed the car to Angelelli, but the No. 10 car came out just after the No. 01 Lexus. Despite throttle cable problems in the closing stages, Angelelli kept the pressure on Pruett throughout before settling for second.

“Scott really was fast today," said Angelelli. “I gave everything I had but just couldn’t get by him. We got lucky because we were losing some throttle towards the end of the race, and clearly I’m very happy with second place. Now, I’m ten points closer in the championship and hopefully we’ll have a good finishes at the end of the year."

Despite competing in just his third Rolex Series event of the season, Briscoe earned his second podium of the season in the No. 10 machine, both coming at Watkins Glen International. The Aussie collaborated with Angelelli and car owner Wayne Taylor to finish third in June’s Sahlen’s Six Hours of The Glen in June. Briscoe also finished third in June’s Indy Racing League IndyCar Series event at The Glen.

“Alex had good pace on all the restarts and we didn’t have speed to pass them," Briscoe added. “We got a yellow and came to the pits, but unfortunately, the No. 01 car beat us out. I gave the car to Max and he did a great job. We didn’t have the speed to get by Pruett at the end, but again, we’re fortunate with the finish."

The Daytona Prototype driver championship tightened up somewhat in the Crown Royal 200 at The Glen following a tough outing for points leader Jorg Bergmeister and his No. 76 Krohn Racing Ford Riley co-driver Colin Braun. On a Lap 8 restart following the evening’s first full-course caution, Braun made contact with the rear of Mario Haberfeld’s No. 12 Lowe’s Fernandez Racing Pontiac Riley in Turn 1, sending the Brazilian spinning. Simultaneously, the No. 76 machine made side-to-side contact with the No. 19 Playboy/Uniden/Palms Ford Crawford driven by Michael McDowell, who then collected the spinning No. 12 machine.

For his role in the incident, Braun was given a “stop and go" penalty plus two minutes for avoidable contact, putting the No. 76 machine a lap down. The team rallied back onto the lead lap, and Braun handed control to Bergmeister in a Lap 66 pit stop. Bergmeister then earned a second penalty for getting out of line on the ensuing restart, but battled his way back to finish ninth. The German saw his points lead reduced by 10 points, and is now 29 points ahead of Angelelli, 415-386, with two races remaining. Pruett and Diaz are tied for third in the standings with 383 markers apiece.

The Daytona Prototype team championship is considerably tighter, with just six points separating the top three teams. The No. 76 Krohn Racing team leads with 389 points, followed by the No. 10 SunTrust team with 386 points. The No. 01 team is third with 383 markers.

Patrick Long and Mike Rockenfeller finished third in the No. 23 Ruby Tuesday Championship Racing Team Porsche Crawford for the duo’s third-straight podium finish. Rockenfeller ran with the leaders throughout his opening stint, also pitting on Lap 33. Long drove the race’s final 49 laps and kept pace with Angelelli and Pruett, finishing just 2.092 seconds in arrears of the No. 01 Lexus.

“We started third, and obviously tried to fight for the victory," said Rockenfeller. “We’re real happy with the finish and real proud of everyone at Ruby Tuesday. I don’t think we had the speed to keep up with the winners, and they didn’t make any mistakes."

“We got a little bit spoiled at the beginning of the year," Long added. “We had a mean streak of DNFs in the middle of the season but it makes it that much sweeter for a first year program to stay focused. I made a mistake here in June, but the Ruby Tuesday team never doubted us and we’re happy to be back up near the front in the most competitive field in series history. We’ll go back and do our homework and finish up the season well."

NOTEBOOK
During the Lap 33 caution when the lead group came down pit road for their driver changes, Gurney—who was in the lead at the time—handed control to teammate Jon Fogarty. When Fogarty pulled out of the pits, however, the fueling mechanism was still attached, incurring a “stop and go" penalty. The No. 99 machine wound up 13th at the finish… With two races remaining on the 2006 schedule, seven drivers are still mathematically alive in the championship picture. Bergmeister leads the way with 415 points, followed by Angelelli (386), Pruett and Diaz (383), Braun (357), Long and Rockenfeller (348) and McDowell (345)… In the Daytona Prototype engine manufacturer standings, Pontiac holds a one-point advantage over Lexus (452-451). Ford is third with 344 markers… Riley Technologies extended its lead in the Daytona Prototype chassis constructor standings, now 55 points ahead of Crawford Race Cars (507-452)… The No. 75 Krohn Racing Ford Riley—started 25th by team owner Tracy Krohn and finished by Nic JÃ¶nsson—made up 13 positions during the race en route to a 12th place finish, earning the machine the SunTrust “Improve Your Position" Award.