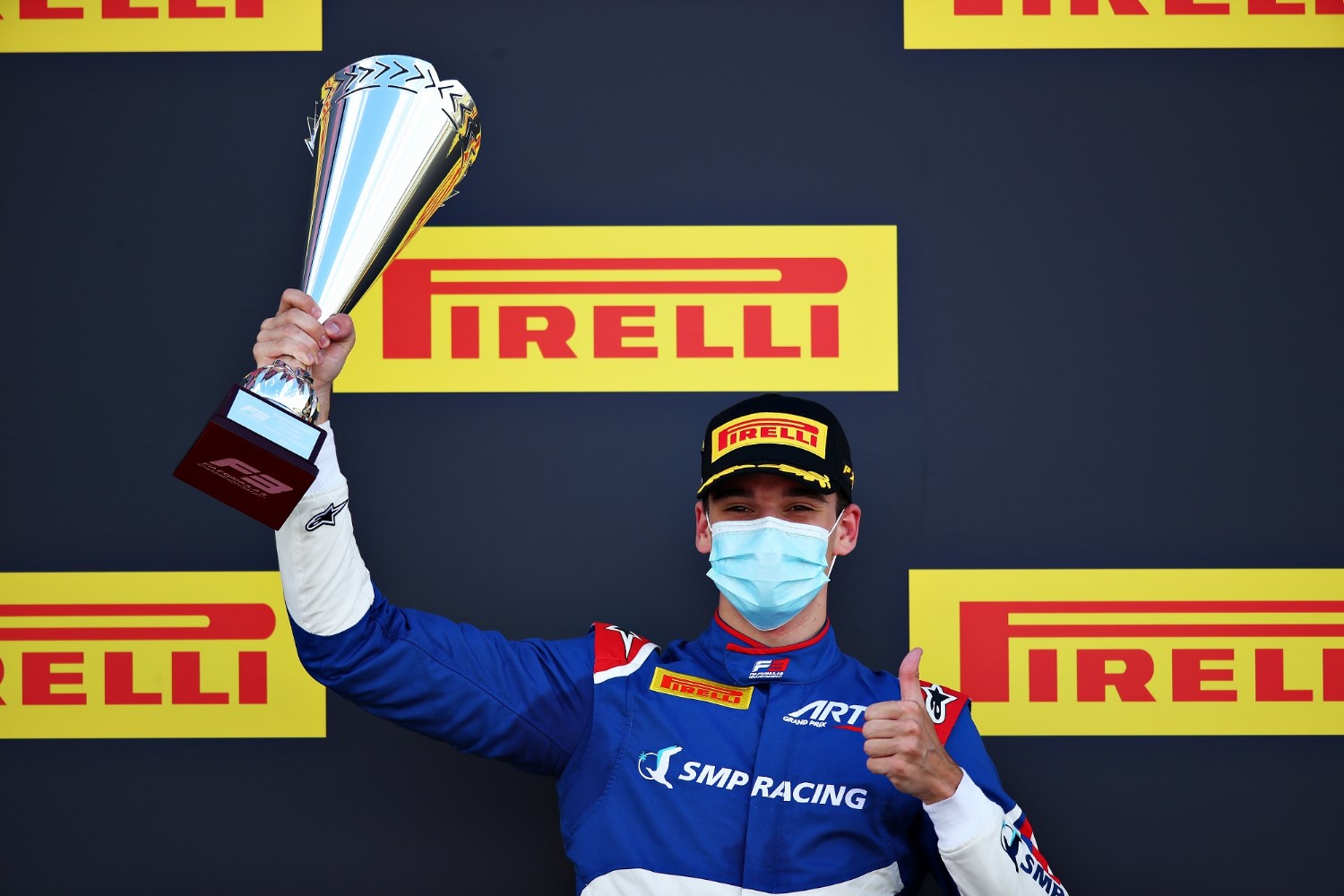 Formula 3 win to become the sixth different victor of the year, leading from lights-to-flag at Silverstone ahead of David Beckmann and Clement Novalak.

Beckmann may feel aggrieved to have not gained further ground on his Championship rivals, who were all further down the pack, but it was a case of balancing risk versus the reward for the Trident driver, as a train of cars were following in tow, ready to pounce on any mistakes made.

He’ll won’t have been thrilled by Smolyar’s attempts to break his own tow either, but the ART Grand Prix driver kept it on the limit and race control didn’t deem it severe enough for a black and white flag.

Fellow title challengers Frederik Vesti and Logan Sargeant managed fifth and sixth, with Liam Lawson gaining three positions for seventh. Meanwhile, it was a difficult morning for the Championship leader, as Oscar Piastri was forced to retire.

Smolyar made a fine start from reverse pole, and he needed it to keep Beckmann at bay. The Trident racer pushed the Russian hard into the first corner, but couldn’t catch up to attempt an overtake.

SebastiÃ¡n FernÃ¡ndez attempted to fire down the middle off the line, but was blocked by the Carlin of Clement Novalak in third. The Spaniard was then served with a stop/go penalty for being out of position during the formation lap, rendering his strong start inconsequential.

There was a hairy moment for Piastri in the opening laps, as the Championship leader ran wide

at Luffield and battled to get back onto the tarmac. This plunged the PREMA out of the points and down to 16th. The Australian’s day didn’t get any better as he was later forced to retire from the pits.

It didn’t take long for his teammate, Vesti, to be told on the radio that all of his Championship

rivals, bar Beckmann, were behind him and that he should go on a charge.

Little else changed early on and Smolyar continued to lead the pack around Silverstone until Igor Fraga came to a halt and brought out a safety car, which forced Smolyar to make a second getaway.

The Russian kept his cool at the restart, controlling the pace at the front and setting the fastest lap on his way around. Lawson, who had taken his first Race 1 win on the Saturday, was on the assault and made up four spots to sixth to boost his Championship chances.

Vesti, who had been told to push on by his team, had failed to make any inroads on Peroni in fourth and was quickly being caught by the resurgent Lawson. The Hitech racer attempt a move down the inside and momentarily got ahead, but the PREMA just about clawed the place back.

Smolyar had been unable to pull away, and Beckmann twice eyed up the race leader but didn’t have the confidence in his tires to commit to a move, with a large train of cars behind him. The Trident was fully aware that any slip up could cost him a podium and crucial Championship points.

In a rather cheeky attempt to break the tow, the ART racer was weaving down the straights, but the Russian was warned by his team over radio that he was over-stepping the mark and race control noted his antics.

The weaving stopped, but Beckmann was still unable pass in the final laps as Smolyar calmly closed out his first win in F3. Novalak completed the podium, ahead of Alex Peroni and Vesti.

Lawson’s charge up the grid was thwarted by Sargeant, who reclaimed sixth from the Hitech. Theo Pourchaire finished in the final points position, to at least depart Round 4 with a point on the board, having finished outside of the top ten in Race 1.

Piastri remains at the top of the Drivers’ Championship with 94 points, but is now only 18 ahead of his teammate Sargeant in second. Beckmann is third on 61.5, followed by Lawson and Vesti. In the Teams’ Championship, PREMA lead with 223.5, ahead of ART on 106. Trident are third, followed by Hitech Grand Prix and MP Motorsport.

“My first win and it was a tough one. I had to defend a few times, but I am super happy with the

car and super happy that I managed to hold my place.

“It was an amazing race and I hope that it is just beginning and that we can fight more, and even better, for the next races."