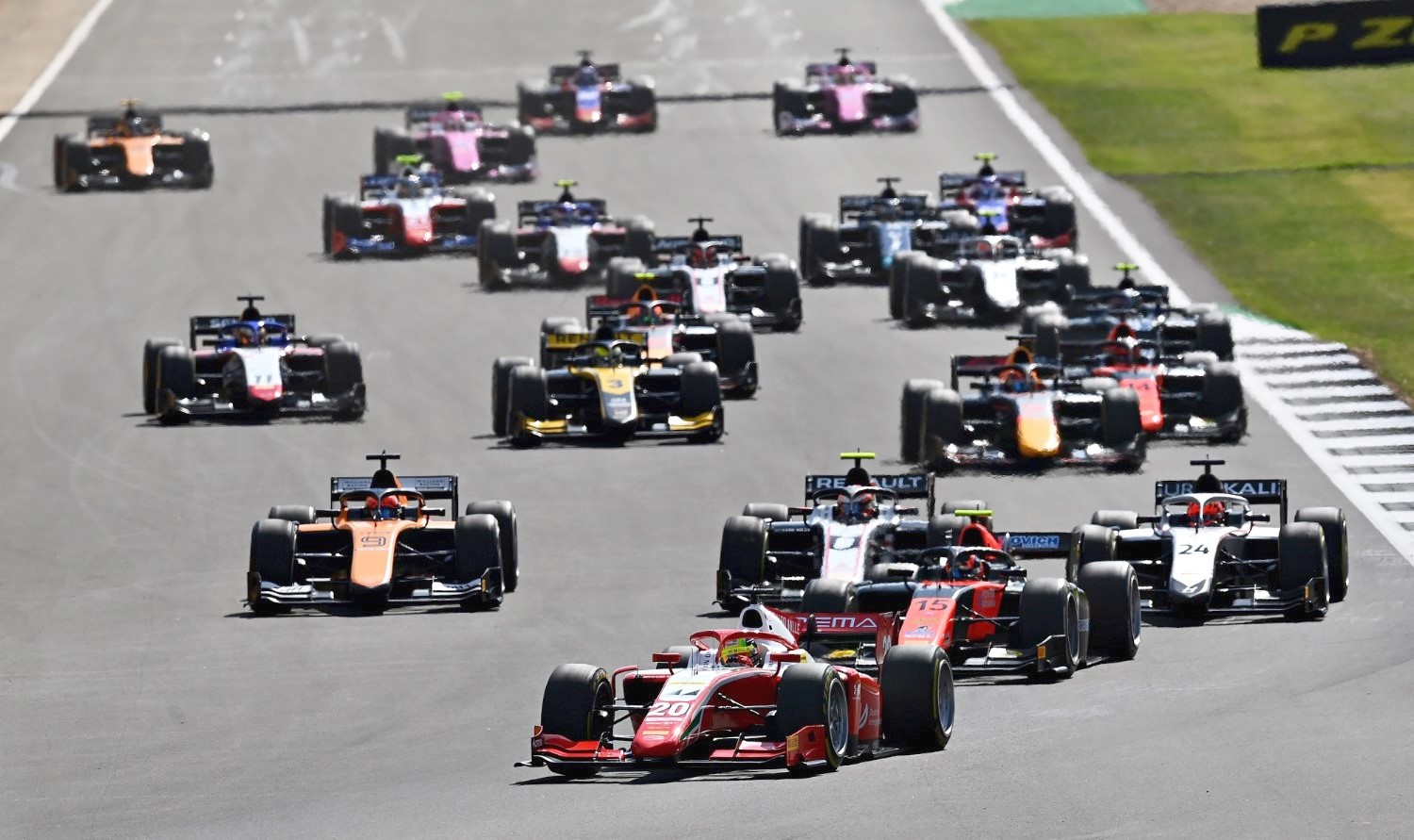 Nikita Mazepin’s astonishing turnaround of form continued in Round 4, as he followed up his first Formula 2 podium in the previous round, with his first ever victory in the Feature Race at Silverstone. UNI-Virtuosi’s Guanyu Zhou was second, ahead of Yuki Tsunoda in third.

The Hitech racer took just one point from the first four races but has added 51 to his tally since then, and cruised to a comfortable victory for Hitech Grand Prix’s second win in as many races.

Starting from eighth, Zhou worked wonders on the alternate strategy. Pitting with seven laps to go, he returned in P8 and made a late dash to the podium, getting past Christian Lundgaard for second on the penultimate tour of the circuit.

Having looked so strong early on in the afternoon, Lundgaard was also beaten by Tsunoda on the last lap, with the Carlin racer putting in a stunning drive of his own, from ninth.

UNI-Virtuosi’s duo suffered contrasting fortunes, as Callum Ilott was forced to start from the pits, having originally qualified in second place. The Briton will at least be pleased to have recovered to fifth place.

Round 4 had started so brightly for Felipe Drugovich, but the polesitter endured a tough day at the office on Saturday, falling back to seventh.

Championship leader Robert Shwartzman struggled in Qualifying on Friday and was unable to make up much ground in the Feature Race, finishing outside of the points in 14th, and seeing his lead at the top of the Championship shrink.

The sun had returned after a gloomy morning in Northamptonshire, but it was still 10 degrees cooler than during the sizzling hot Qualifying on Friday. Just like the weather, Drugovich wasn’t as hot as the previous day. The MP Motorsport driver had made the hard tires his own in the

opening three rounds, but struggled to get them going off the line.

Schumacher’s start however was scorching. Starting from third on the medium compound, the German flung his PREMA around Drugovich, making the most of the gap left by Ilott to swing to the right and dive ahead for the race lead.

Drugovich’s demotion didn’t stop there, the MP Motorsport racer fell down as far as fourth, with Mazepin and Lundgaard both getting ahead as well.

Mazepin, who had also started on the medium tires, was straight on the wheel tracks of Schumacher and made his move when the DRS window opened on Lap 3. The in-form Hitech racer made a daring maneuver around the outside of Stowe, finding enough grip to go the long way around Schumacher and into the lead.

Four laps in and Drugovich had finally turned on the hard tires, but he’d already lost a lot of ground on his rivals, sitting in fourth and stuck in traffic. He eyed up a move on Lundgaard, but daren’t take the risk, with the pit window for those on the option-prime strategy not far off.

Mazepin and Schumacher pitted from the lead on Lap 8 and returned in 13th and 14th after swift stops from their teams. Lundgaard changed his boots on the following lap and this handed Drugovich back P1. The Brazilian was on the alternate strategy and required a gap of at least 30s to stand any chance of retaining first after his own stop.

Mazepin made light work of moving up to eighth, with the gap standing at just 25s. Schumacher was struggling though – he got held up in traffic and this allowed Lundgaard to sweep ahead of him.

Drugovich pitted with 10 laps remaining and returned all the way down in 12th, but on the faster medium tire. The remainder of those on the alternate tire, which included Zhou, followed within

the next three laps, which handed Mazepin back the lead.

Schumacher was back where he started, in third, but the German was struggling with grip and his pace had deserted him. He had Louis Deletraz in his mirrors, and eventually succumbed to the Swiss driver.

Zhou returned from his pit stop in eighth and what followed next was astonishing. He made light work of switching on the medium tires and instantly dispatched of his teammate, Ilott, before lunging ahead of Jehan Daruvala, Schumacher, Tsunoda and Deletraz within a single lap to put himself provisionally on the podium.

It looked as if second would prove a place to far for the Chinese driver, but he caught up with Lundgaard in rapid time and the Dane had little choice but to let him pass.

Having looked good for a podium, Deletraz wilted and allowed both Tsunoda and Ilott ahead of him. Tsunoda then made a last lap leap on Lundgaard for third to snatch a podium at the death.

Unlike the ART Grand Prix driver, Mazepin was not going to be caught, and even on the hard tires, his pace remained relentless. He crossed the checkered flag with a margin of 5.3s over Zhou.

Tsunoda completed the podium, while Lundgaard held on to fourth and Ilott fifth. Deletraz kept sixth, ahead of Drugovich, Dan Ticktum, Schumacher and Nobuharu Matsushita.

Shwartzman remains at the top of the Drivers’ Championship with 81 points, but Ilott has closed the gap to just eight between them after the Russian failed to score any points. Lundgaard remains third on 55, while Mazepin has leapt to fourth on 52. Zhou is up to fifth with 51 points.

There has been a change in the lead in the Teams’ Championship, with UNI-Virtuosi leapfrogging to first with 124, ahead of PREMA Racing on 122. ART are third ahead of Hitech and Carlin.

“I am extremely happy, but it is a little bit difficult to put how I feel into words because it was reasonably unexpected. There was so much going on that I wasn’t really thinking about leading the race.