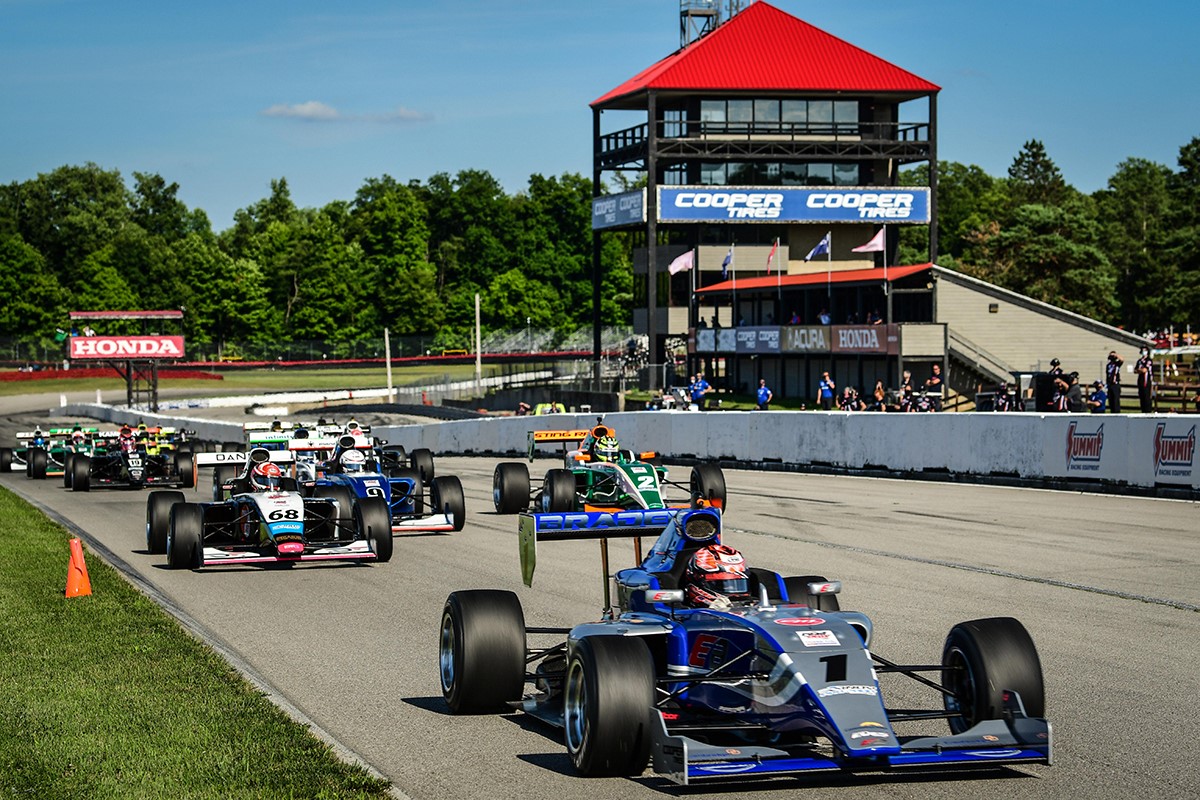 Championship leader Danial Frost, from Singapore, maintained his points lead with a strong second-place finish for Turn 3 Motorsport, while popular Canadian Parker Thompson bounced back from a dismal opening weekend earlier this month at Road America to finish close behind in third for DEForce Racing.

The Indy Pro 2000 Grand Prix of Mid-Ohio Presented by Cooper Tires Honoring First Responders got off to a hot start this morning with the top eight cars in qualifying separated by a hair over a half-second. Eves, who won last year’s Cooper Tires USF2000 Championship, along with a scholarship to ensure graduation onto the next step of the acclaimed Road to Indy ladder, emerged as top dog to scoop his first Cooper Tires Pole Award by a scant 0.0394 of a second over Frost. Payette, Idaho’s Sting Ray Robb qualified third for Juncos Racing with Thompson in fourth.

After the first attempt at a start was waved off because the full 17-car field wasn’t properly aligned, Eves timed his getaway perfectly at the second time of asking to lead Frost into the first corner. It seemed as though Frost’s car reached its optimum performance a little earlier than Eves, but the local man clung onto his lead and gradually increased his pace as the top two began to edge clear of Thompson, who had found a way past Robb at the start.

There seemed to be nothing to choose between the two leaders. Eves, though, made not the hint of a mistake even with Frost remaining hot on his heels.

There was a brief respite for Eves when the caution flags flew at half-distance following a spin for top-10 runner Moises de la Vara (DEForce Racing) at Turn Six. Frost hoped the restart might allow an opportunity for him to make a move for the lead. But again Eves was up to the challenge, and even though his lead was always tenuous, he held on to take his first Indy Pro 2000 victory by just 0.3024 of a second.

Frost was content to finish second, realizing the importance of the season-long championship which offers a scholarship valued at over $600,000 to ensure graduation onto the top step of the Road to Indy ladder in a rejuvenated Indy Lights Presented by Cooper Tires next year.

Thompson, too, was delighted with third, especially with young Mexican teammate Manuel Sulaiman chasing him home just 1.8 seconds in arrears.

A disappointed Robb rounded out the top 10 following an off-track excursion at the exit of the Keyhole.

A separate qualifying session tomorrow at 8:45 a.m. will set the starting lineup for the next 25-lap race in the first-ever midweek standalone triple-header which will start at 12:30 p.m. The grid for Round Five, set to start at 4:45 p.m., will be determined according to each driver’s fastest race lap in Round Four.

Braden Eves (#1Road to Indy/Cooper Tires/MDRN Livery/CCFI/Huston Insurance-Exclusive Autosport Tatuus PM-18): “This is one of my favorite wins ever. It feels so good. This is my home race so I always want to do well here but man, last year was the beginning of what could have been the demise of a championship. I was able to save it in the end, save my chance at the scholarship and my dreams of the future, so to come back this year and win is great.

“Danial put pressure on me the entire race, I couldn’t get away from him. He had great pace and kept me on my toes the whole way. The Exclusive Autosport guys did a great job to give me a car I could put on the pole but I think we can make even a few more improvements for tomorrow and keep it on top."

Danial Frost (#68 DEN-JET Turn 3 Motorsport Tatuus PM18): “Our pace was there, it’s just so difficult to pass here so track position is key. Tomorrow we need to do a better job in qualifying to get that first place. I’m happy with the result, though. I didn’t want to take any stupid risks just to get a couple more points. It’s early in the season and there’s plenty more in play."

Parker Thompson (#9 DEForce Racing/Valkyrie Velocity-DEForce Racing Tatuus PM-18): “It’s so good to be back racing, so to stand on the podium – even without champagne or fans – I’ve missed that feeling. It feels extra special to be here with DEForce. I wouldn’t be here without them, it’s a complete team effort. The cars are strong, we just need a little more pixie dust on it and I think we’ll be fighting for the top spot. We need to qualify better tomorrow and let the race happen. We know we have the car. We just need some clean air to check out."