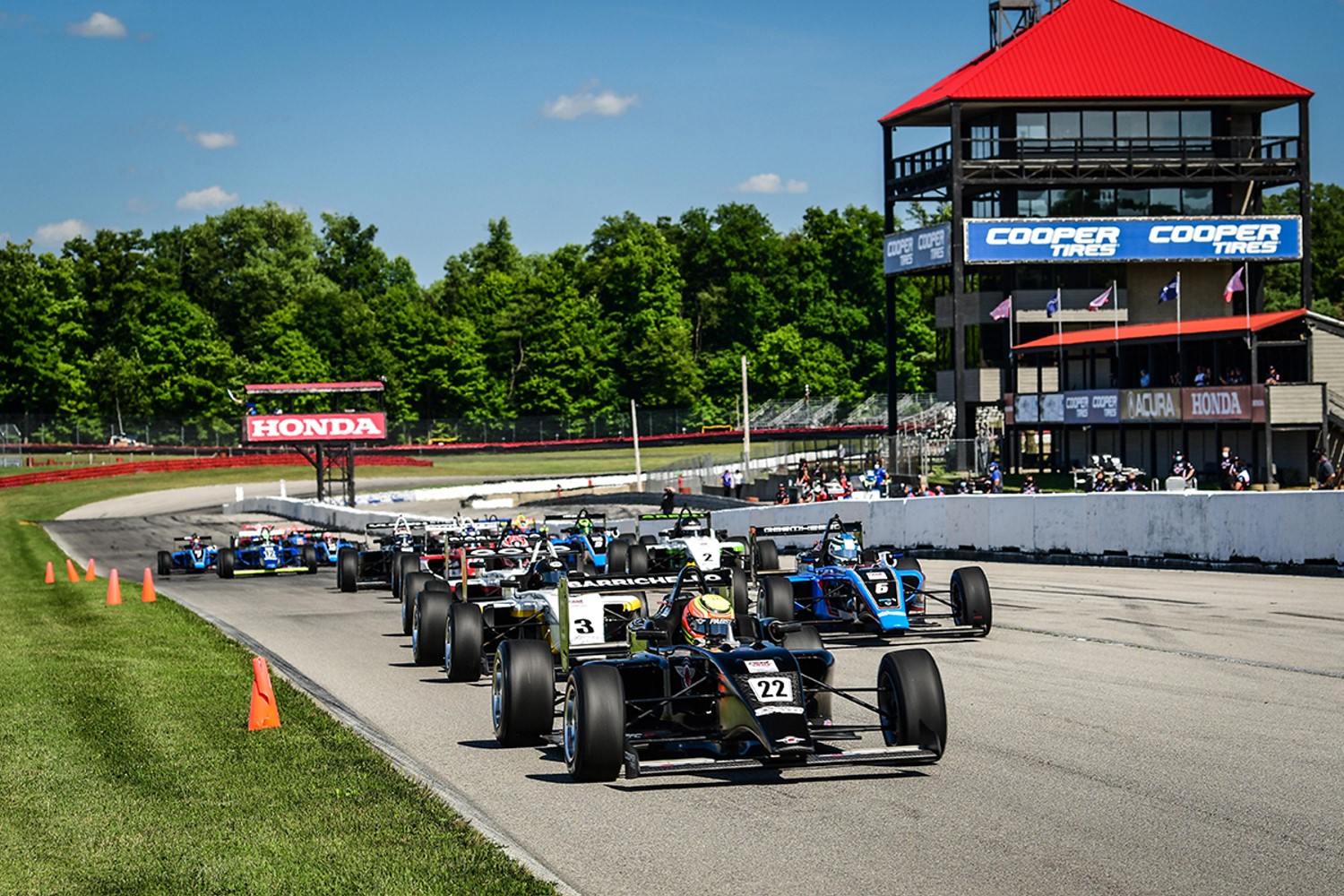 No one came close to challenging the current dominance of Cooper Tires USF2000 Championship leader Christian Rasmussen this afternoon at the first of three midweek races which will comprise the USF2000 Grand Prix of Mid-Ohio Presented by Cooper Tires Honoring First Responders. Rasmussen, 20, from Copenhagen, Denmark, quickly moved up from his third-place starting position for Jay Howard Driver Development, overtook pole winner Eduardo Barrichello (Pabst Racing) on the third lap, then simply drove away into the distance at the challenging 2.258-mile Mid-Ohio Sports Car Course.

Second-generation Brazilian racer Barrichello held on for a career-best second-place finish, despite a determined challenge from 15-year-old Floridian Reece Gold who also secured his best result to date for Cape Motorsports.

The standalone triple-header race meeting for the Road to Indy Presented by Cooper Tires began with a 30-minute practice session this morning, followed a couple of hours later by qualifying. Barrichello, 18, was fastest in both to clinch his first-ever Cooper Tires Pole Award. Gold was just 0.0045 of a second adrift to ensure a starting position on the outside of the front row. After winning both season-opening races from the pole at Road America earlier this month, Rasmussen had to be content with a position on row two of the grid alongside Michael d’Orlando (Cape Motorsports).

Barrichello made a good start to maintain his position at the front, but it wasn’t long before Rasmussen was looming large in his mirrors. On the third lap, Rasmussen made a bold move around the outside over the crest of the hill at Turn Five, which ensured he would have the inside line as the two leaders plunged downhill again into Turn Six. It was a fine maneuver, and thereafter he was in a class of his own as he set and reset fastest lap of the race before finally taking the checkered flag a massive 12.7818 seconds clear of Barrichello.

Rasmussen’s magnificent effort ensured a third successive PFC Award for team owner Jay Howard, who himself is a former champion in both USF2000 and Indy Lights.

Barrichello looked to have second place fairly comfortably within his grasp at the halfway point in the 20-lap race. But Gold had other ideas. The youngster from Miami, Fla., closed inexorably during the final stages without ever quite getting close enough to cause Barrichello too much concern.

Behind, Gold’s teammate d’Orlando also was part of the battle until he had to fend off the attentions of Matt Round-Garrido (Pabst Racing). After starting a lowly 15th, the Englishman made rapid progress through the order, earning the Tilton Hard Charger Award as he finished fifth, hot on the heels of d’Orlando.

Unfortunately, another Cape vs. Pabst battle had ended in tears early in the race when Josh Green, a podium finisher at Road America, tangled with Yuven Sundaramoorthy in the Carousel on the opening lap.

Spare a thought also for Jack William Miller, who displayed prodigious pace – setting the second fastest lap of the race – for Miller Vinatieri Motorsports. Unfortunately, he finished two laps off the pace in 16th after his car had failed to fire up on the starting grid.