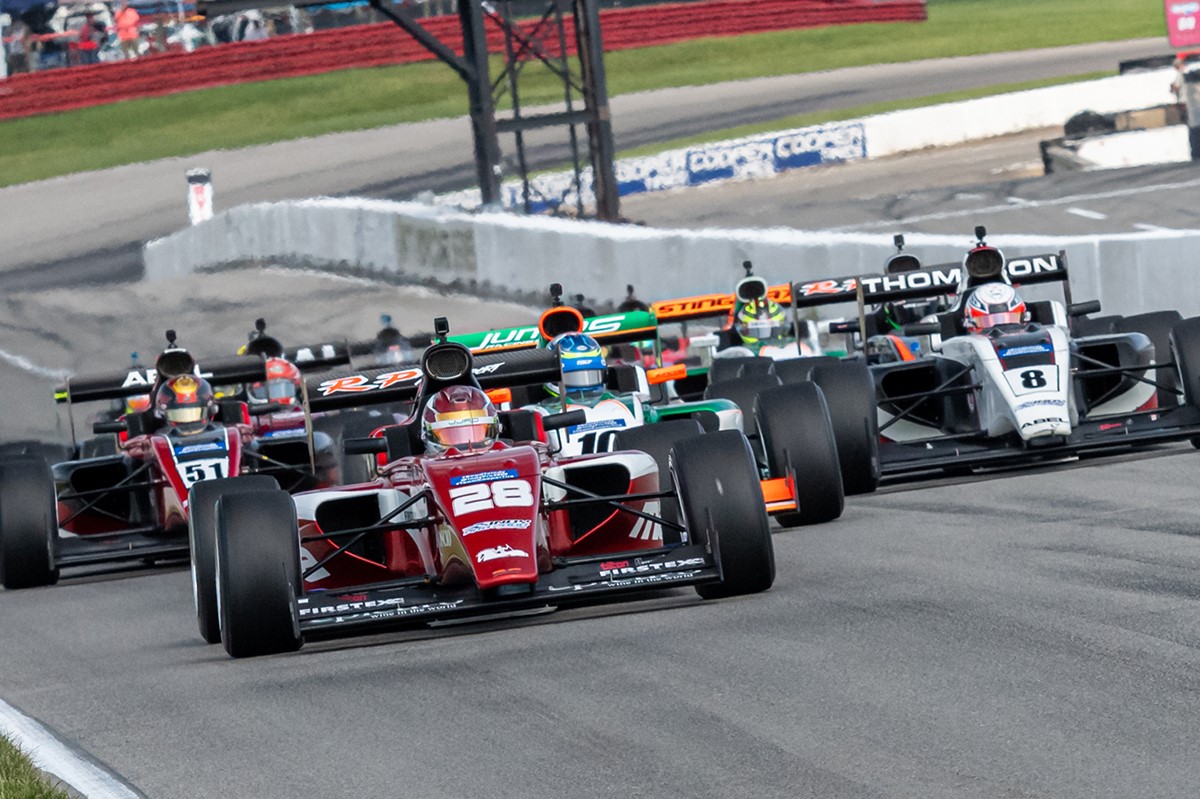 On Wednesday and Thursday of this week, July 29/30, the two open-wheel development series will be featured in a tripleheader stand-alone event – the Grand Prix of Mid-Ohio Presented by Cooper Tires Honoring First Responders – at the challenging and undulating 2.258-mile natural terrain road course. The following week, teams and drivers will return to the track situated a little more than an hour’s drive from the Cooper Tire & Rubber Company’s global headquarters in Findlay, Ohio for two more Indy Pro 2000 races and another USF2000 tripleheader in support of the NTT INDYCAR SERIES on August 7-9.

As was the case when the 2020 season finally began recently at Road America following a delay of almost three months, strict protocols for social-distancing and PPE once again will be observed.

Frost Leads the Way in Indy Pro 2000
At the turn of the year, after winning twice and placing fifth in points in his rookie season of Indy Pro 2000, Danial Frost was contemplating graduation to Indy Lights for 2020. The pandemic changed all of that. Instead he has reset his sights and is now chasing a scholarship which will enable the Indy Pro 2000 champion a guaranteed season in the rejuvenated Indy Lights series with the team of his or her choice in 2021.

The 19-year-old from Singapore endured a roller coaster ride during the season-opening pair of races at Road America. After posting the fastest time in qualifying, Frost’s Turn 3 Motorsport Tatuus PM-18 was banished to the back of the grid due to a technical infraction. Undeterred, he posted a sensational drive through the field, drafting past rookie Devlin DeFrancesco on the final uphill run to the checkered flag.

“It didn’t make me worried, to start from the back at Road America," reflected Frost, who added a third-place finish in Race Two to maintain the early championship lead. “I was calm and I knew I could move forward. I’ve worked on my overtakes a great deal during the down time, to make sure they were less risky, compared to last year when I would just go in and hope it would stick. I’m playing the long game this year, so I have to be more focused on how I approach each car and more calculated in my moves.

“But my plan for Mid-Ohio is the same as it will be every weekend this year. I know the car will be fast so I have to work toward being the most confident and the most prepared driver out there. We’ve done a good job of that so far so we have to put the results in and hopefully we’ll still be the points leader at the end of the weekend."

DeFrancesco also impressed at Road America during his first foray into American racing after competing in a variety of open-wheel series in both Europe and Asia in recent years. The 20-year-old Canadian-Italian from Toronto trails Frost by only six points after making a decision to join Andretti Steinbrenner Autosport on its return to Indy Pro 2000.

“The Andretti Steinbrenner team did an unbelievable job at Road America," said DeFrancesco. “They’d had the car two days before the series test at Mid-Ohio the week before, so the learning curve was steep, but they’ve been spectacular. Our speed has gotten better as we’ve learned more about the car in each session, and to get a pole and a podium – almost a win – on our race debut was a very good way to start.

“Road America is similar to some of the European tracks," he continued, “but it’s less forgiving, with less runoff, which I think makes it more exciting, whereas Mid-Ohio is more of its own beast. It has all the undulation and it’s very low grip, so it has its own characteristics and things to watch out for and I quite liked that. I’m excited to get back there and build on our Road America experience. I think we can surprise a few people and do a good job there as well."

An extremely competitive field also will include 2019 USF2000 champion Braden Eves, from nearby New Albany, Ohio, who secured a pair of top-five finishes at Road America for Exclusive Autosport, and two of the drivers who pushed him closest last year, Pabst Racing teammates Colin Kaminsky and Hunter McElrea. The Pabst pair encountered wildly differing fortunes in Wisconsin. Kaminsky, from Homer Glen, Ill., claimed a solid podium finish on his Indy Pro 2000 debut, while New Zealander McElrea’s strong pace in qualifying was not reflected in the final results.

Texas-based DEForce Racing also has hopes of bouncing back from a difficult opening weekend during which preseason favorite Parker Thompson, from Red Deer, Alb., Canada, failed to finish either race. Mexicans Manuel Sulaiman and Moises de la Vara both displayed promise and will be joined this week by Kory Enders, from Sugar Land, Texas.

The 17-car field will be completed by promising BNRacing with Team Benik rookies Jacob Loomis, from Corinth, Texas, and Sabré Cook, from Grand Junction, Colo., plus veterans Bob Kaminsky, from Homer Glen, Ill, aboard a third Pabst entry alongside his son Colin, and New Yorker Charles Finelli (FatBoy Racing).

Christian Rasmussen demonstrated why he is a red-hot favorite for USF2000 honors this season by claiming a pair of dominant victories for Jay Howard Driver Development at Road America. The 20-year-old from Copenhagen, Denmark, now holds a commanding 19-point advantage over his nearest challenger as the 21-car field heads to Mid-Ohio.

“Race wins are always the goal, but the main focus right now is to extend the points lead and continue being consistent and winning races," said Rasmussen, who secured a win and a second at Mid-Ohio last year. “We are thinking championship, so that’s the most important thing right now. Mid-Ohio has always been good to me: I won there in F4 and won there again last year. It’s a very technical, flowing track and I love that. And the team has always been strong there so I’m looking forward to keeping the winning streak going. I need to keep my head down and keep doing what I’m doing. The team is doing a good job, and I’m doing everything I can away from the track to stay fit, ready and sharp. We’re on the right path and we want to stay that way."

The Cape pair of Josh Green, from Mount Kisco, N.Y., and Michael d’Orlando, from nearby Hartsdale, N.Y., proved to be the closest challengers to Rasmussen at Road America, with teammates Reece Gold, from Miami, Fla., and Kyle Dupell, from Portland, Ore., not far behind.

“I have some great teammates and that helps, since we’re always pushing each other to get faster," said d’Orlando, who posted the fastest time during a preseason test at Mid-Ohio last month. “We’re sharing information so we don’t have to do it on our own – but that can be a hindrance as well, because I know three other fast guys are learning the exact same things I am. That means I have to try just that little bit more to try and beat them.

“I’m super excited to get to Mid-Ohio," he continued. “We learned so much from the test, so that’s good knowing we have six races there over the next two weeks. It’s a track I feel we’re strong at so I’m ready to go out and give it my all."

Brazilian Eduardo Barrichello, whose father Rubens was a prolific F1 race winner for Ferrari, and Englishman Matt Round-Garrido finished both Road America races in the top-five for Pabst Racing, along with top-10 runner Yuven Sundaramoorthy, from Oconomowoc, Wis.

Fastest during one of the Mid-Ohio preseason test sessions, Jack William Miller, from Carmel, Ind., intends to carry that form into this week with Miller Vinatieri Motorsports teammate Max Kaeser, from Keystone, Colo.

Other contenders will include the Legacy Autosport pair of Cameron Shields, from Australia, and Floridian Ayrton Ori; Exclusive Autosport’s rookie trio of Prescott Campbell, from Newport Beach, Calif., Christian Brooks, from Santa Clarita, Calif., and Josh Pierson, from Wilsonville, Ore.; and the DEForce Racing duo of Nico Christodoulou, from Canada, and Brazilian Kiko Porto, a race winner last year at Mid-Ohio in F4 who is anxious to make his USF2000 debut after being unable to enter the country in time for the Road America season openers.

All qualifying and race events will feature live circuit feed on the Road to Indy TV App, RoadToIndy.TV and the respective series websites, indypro2000.com and usf2000.com.