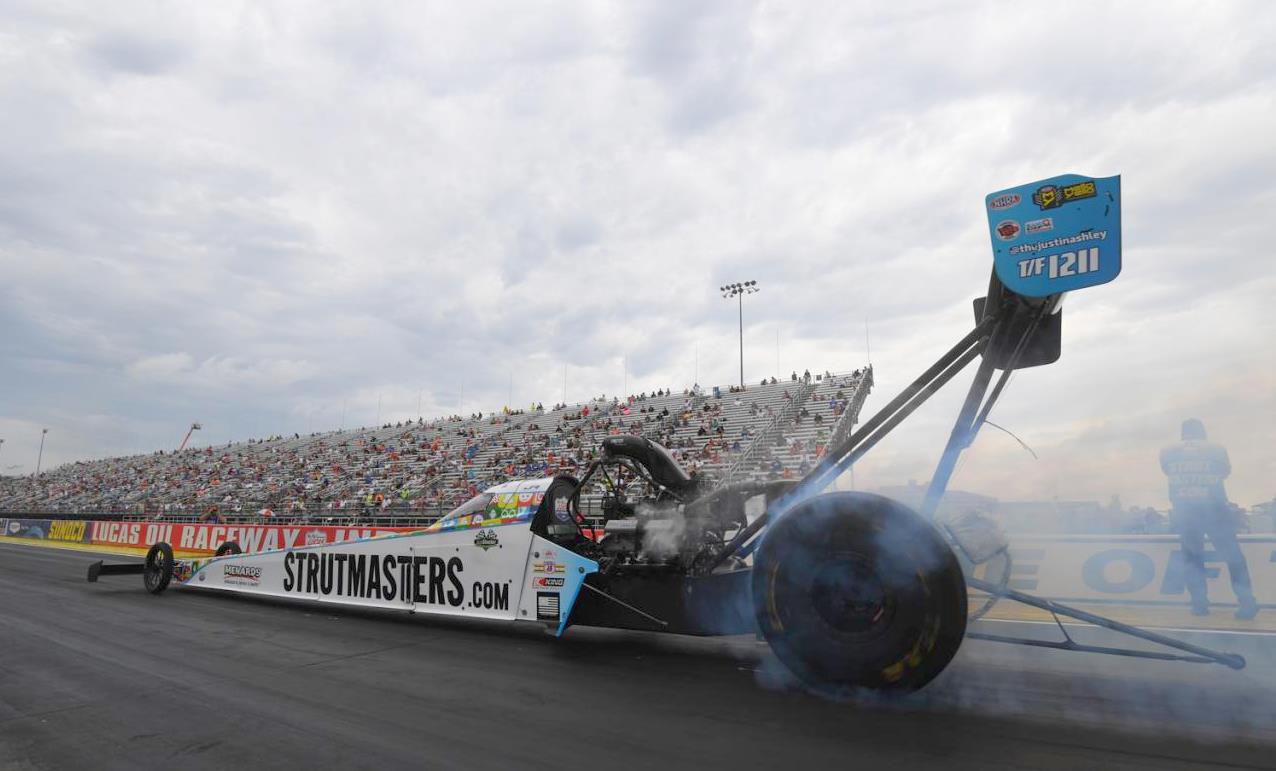 The final rounds of Top Fuel, Funny Car, Pro Mod, Factory Stock, and Top Fuel Harley were impacted by a late afternoon thunderstorm at Lucas Oil Raceway at Indianapolis and will now be contested during the upcoming U.S. Nationals.

First-time finalists T.J. Zizzo and Justin Ashley will have to wait a few more weeks before battling to become NHRA’s 109th different Top Fuel winner after the final rounds of the Lucas Oil NHRA Summernationals were postponed by rain. The final rounds of Funny Car, Pro Mod, Factory Stock, and Top Fuel Harley were also impacted by a late afternoon thunderstorm and will now be contested during the upcoming U.S. Nationals, Sept. 4-6.

In addition to the much-anticipated Top Fuel final between Zizzo and Ashley, the Funny Car final will feature Don Schumacher Racing teammates Matt Hagan and Jack Beckman. There will also be a first-time winner in the E3 Pro Mod series when Chad Green takes on Jason Scruggs. The SAM Tech.edu Factory Stock Showdown final will be an all-Ford affair between Bill Skillman and engine builder Chris Holbrook while Jay Turner and Randal Andras will square off to decide the winner in the Mickey Thompson Top Fuel Harley class. Each of the final rounds will be contested during the third qualifying session.

Zizzo reached his first career final by driving his Rust-Oleum dragster to convincing wins against Terry Totten, Todd Paton, and Terry McMillen. He’ll have lane choice over Ashley, who is appearing in his first final in his seventh start in the class. Ashley, the No. 14 qualifier, wheeled his Strutmasters.com entry past a tough line-up including Shawn Langdon, points leader Doug Kalitta, and Leah Pruett.

Hagan is gunning for his second-straight win at Lucas Oil Raceway at Indianapolis having won last weekend’s E3 Spark Plugs NHRA Nationals at the historic facility. The two-time world champion has won seven-straight rounds of Funny Car competition including three wins this weekend against Ron Capps, J.R. Todd, and low qualifier Bob Tasca III. Hagan’s Mopar Dodge team struggled in qualifying but recovered on Sunday with three runs between 3.93 and 3.94. Likewise, Beckman is poised to get his second win of the season after driving his Infinite Hero Dodge to wins over Chad Green, Tim Wilkerson, and Tommy Johnson Jr.

In addition to his nitro Funny Car debut, Green also competed in Pro Mod at the Lucas Oil NHRA Summernationals and in the final, he’ll take his nitrous-assisted Bond Coat Camaro up against the supercharged entry of Scruggs. Both drivers are chasing their first victory in NHRA Pro Mod competition.

Andras and Turner entered the second Indy event separated by just two points at the top of the standings, so their upcoming final round could potentially decide the season championship. Turner made it to the final by beating Rich Vreeland and Tyler Wilson while Andras topped Ricky House and Ryan Peery.