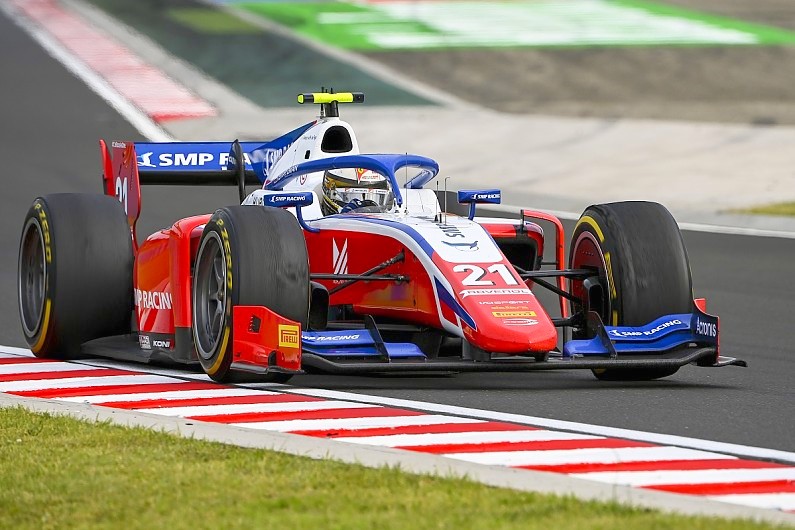 Robert Shwartzman won the FIA Formula 2 Feature Race for the second round in a row in sensational circumstances, at the Hungaroring today. Starting from 11th, the PREMA racer crossed the line with an unassailable lead of 15s over Nikita Mazepin in second.

This was thanks, in part, to the decision to place him on the Prime/Option strategy, which handed him fresh soft tires at the end of the race, when the majority of the field were running on heavily degraded mediums.

Mazepin was another to enjoy the same luxury and took his first podium in F2. The Hitech racer began the afternoon way back in 16th, but he made light work of charging through the pack in the closing laps, once he switched to the soft tires.

Shwartzman’s teammate Mick Schumacher had initially looked set for his first Feature Race win, but he was lucky to cling on to third at the end of the race. The German was the final driver to change from softs to mediums and managed his tires as best he could to hang on at the end.

Polesitter Callum Ilott wasn’t as lucky. The UNI-Virtuosi racer made his change early on, and by the end of the race, had nothing left to give, finishing eighth.

There were several strong starts when the lights went out. Ilott was one of those, getting away cleanly from first. Behind him, Dan Ticktum darted into second, while Schumacher surged down the middle for third.

Shwartzman’s getaway was the most eye-catching. The Russian was starting from 11th after a really tough Qualifying session, but he fired up to sixth by the end of the second corner.

Guanyu Zhou’s start was much more sluggish, and the UNI-Virtuosi racer was swallowed up by the field, falling from third to seventh, while Luca Ghiotto dropped from P2 to fifth, below Christian Lundgaard.

Mazepin slid into fifth with two further overtakes on the next lap, and as he did so, Shwartzman thundered into first and began to quickly pull away from Schumacher, whose tires didn’t have anywhere near enough fight left in them to defend.

Only five laps remained but there was plenty more action to be played out. Mazepin continued his ascent and flung his Hitech around the side of Ilott, before diving ahead of Schumacher for second. By this point, Shwartzman had increased his lead to a jaw-dropping 15s.

Felipe Drugovich managed to make the fresher tires work himself and clawed his way up to fifth, but didn’t have quite enough time for any further overtakes.

Shwartzman crossed the line with a 15.5s advantage over Mazepin, who had more than 7s on Schumacher in third. Ghiotto managed to retain fourth ahead of Drugovich, with Daruvala sealing sixth, ahead of Deletraz.

Polesitter Ilott plummeted down the order to eighth in the final few laps, with seriously degraded medium tires. The Briton will start on reverse pole in the Sprint Race on Sunday. Ticktum and Zhou took the final points’ positions, having struggled with their rubber as well.

Shwartzman’s second victory increases his Championship lead to 22 points over Ilott. Lundgaard is third with 43, ahead of Ticktum and Armstrong. In the Teams’ Championship, PREMA Racing lead with 102 points, ahead of UNI-Virtuosi on 79 and ART Grand Prix on 77. DAMS are fourth and MP Motorsport fifth.

“The win was a little bit unexpected again. I started P11 with a completely different strategy, and to be honest, I was expecting to get some good points, but I did not expect to be first.

“My start was mega, one of the best starts I have done. The launch was good, and I think that I passed five cars in the first two corners, something like that. It was really impressive, and I was like 'oh my god, I am in P6 now.'

“Everyone on the other strategy pitted and I stayed out on track. I was quite surprised because my front left started to degrade: I was losing a lot of time and I felt really slow. But in actual fact, I wasn't that slow and my pace was more or less the same as them.