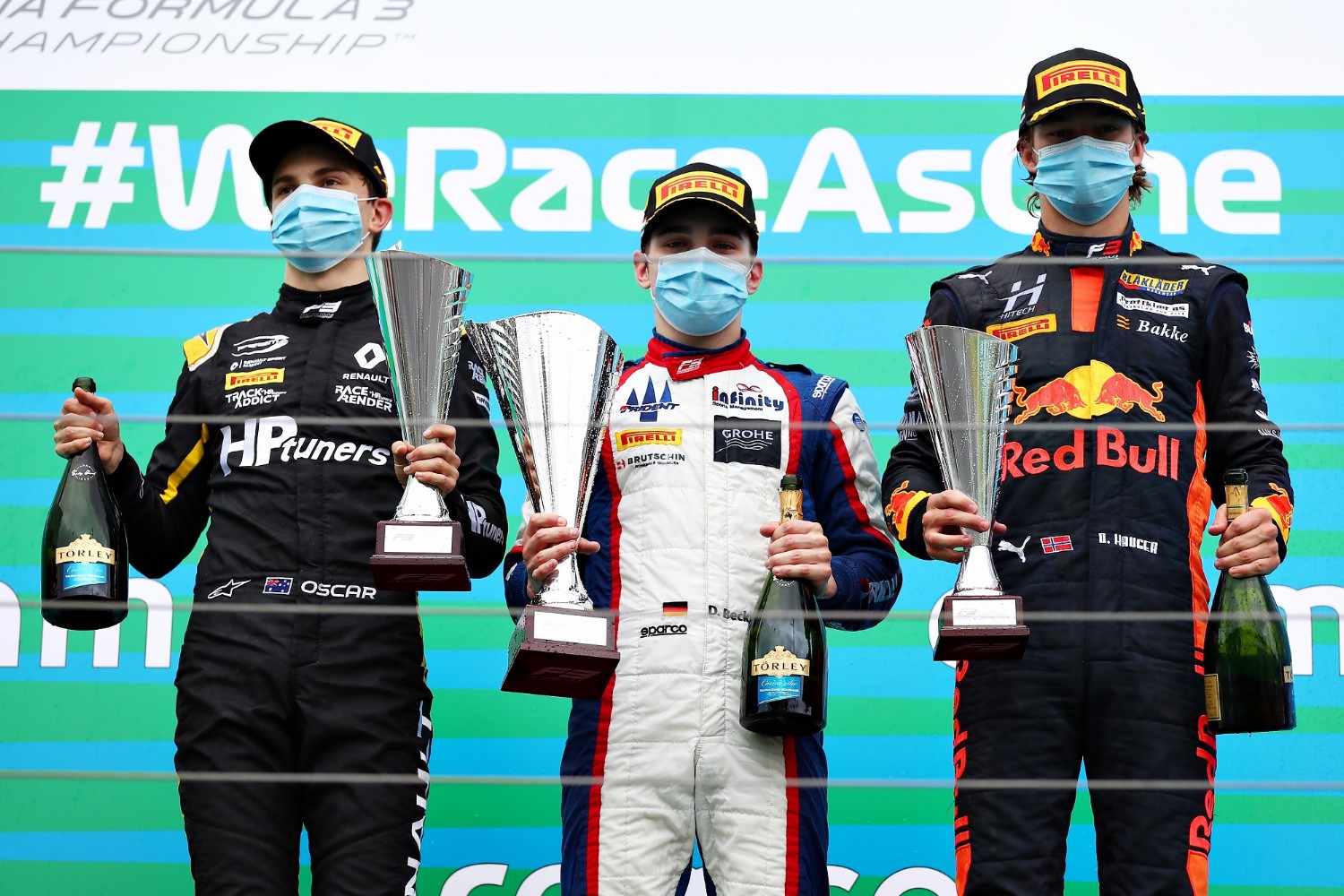 David Beckmann who took his maiden win in Formula 3, despite Bent Viscaal crossing the line first in Race 2 at the Hungaroring, after the Dutchman was handed two five-second time penalties.

Viscaal put in the drive of his life to charge from eighth to first and built up a six second gap in the lead, but a late safety car destroyed his margin and chucked him out of the points completely.

This meant that polesitter Beckmann was able to claim his first victory, ahead of Championship leader Oscar Piastri and Dennis Hauger.

On his birthday, Alex Smolyar enjoyed a stunning race of his own, making up an incredible haul of 20 places to go from 27th, to seventh.

The grid endured another wet race, with light rain still falling onto the track ahead of the formation lap. Despite the wet conditions, Beckmann got off the line cleanly from pole, as Hauger

launched into second and Logan Sargeant fired to third.

Having already leapt to second, Hauger attempted a move on Beckmann at the second corner, but the German went on the defensive and managed to hold him off. The Hitech racer made a second go of it and Beckmann wobbled, but still retained first.

Hauger remained patient and tried his luck again on the following lap, swinging to the side of Beckmann and charging down the outside at Turn 2. The German tried to defend the inside line, but just couldn’t hold on.

The Trident man was really struggling in the wet conditions, losing two seconds on Hauger inside the space of a lap.

Smolyar had thundered through the pack in the early stages, rising from 27th and into 14th.

Meanwhile, Liam Lawson’s weekend went from bad to worse. The Hitech racer retired from Race 1 on Saturday when his car went up in smoke, and was again forced to pull off the track and retire in Race 2 with a mechanical issue, bringing out a safety car.

The safety car bunched up the field, and when it returned to the pits, Viscaal flung himself ahead of teammate Richard Verschoor, and then swung down the side of Sargeant for third. Shortly after the move, he was issued with a 5s time penalty for causing an earlier collision with Igor Fraga.

This prompted the Dutchman to get a move on. Viscaal was finding grip in places the rest of the grid just couldn’t, and demonstrated his confidence by going the long way around Beckmann for P2, making it stick at the exit of Turn 2.

The Hitech of Hauger followed almost immediately after and the Dutchman quickly went to work on building a five second gap at the front, which would have seen him hang on to the race win.

The battling carried on behind him, as Piastri nicked fourth from teammate Sargeant, and Beckmann stole second from Hauger. The duo had kissed tires at the first turn and Hauger momentarily hung on, but Beckmann wasn’t fazed and lunged ahead at the following corner. Meanwhile, Smolyar had fought his way into the points positions and was eying up Sebastian Fireplace in seventh.

Viscaal had pulled away by more than five seconds by this point, but had another investigation hanging over his head as Race Control looked at his earlier move on Sargeant, when he appeared to gain an advantage from leaving the track.

Eventually, the decision was made and another five second penalty was applied. The MP man would still have claimed a podium due to his margin out in front, but Federico Malvestiti suffered damage to his Jenzer and stopped on track. This brought out a safety car for the final laps and brought the pack back together, ruining all of Viscaal’s hard work.

The Dutchman did cross the line in first behind the safety car, but dropped down to 17th due to the two penalties. That meant that Beckmann took the win ahead of Piastri and Hauger.

Sargeant hung on to fourth, ahead of Verschoor and Théo Pourchaire. Smolyar did get seventh and finished ahead of FernÃ¡ndez, Enzo Fittipaldi and Alex Peroni.

“It was an intense race. I managed to have a good start, but Dennis {Hauger} was a bit faster than me, and I think that we had low tyre pressure. I was able to get back ahead of Dennis though, and then in the end Bent {Viscaal} got a time penalty, so I won.

“I am really happy with the win and I think that we made the best out of the situation. The track was getting drier and drier, and we really had to manage the tires. We done a good job and it was a good recovery from a tough Qualifying on Friday, so I am really happy to score some good points."