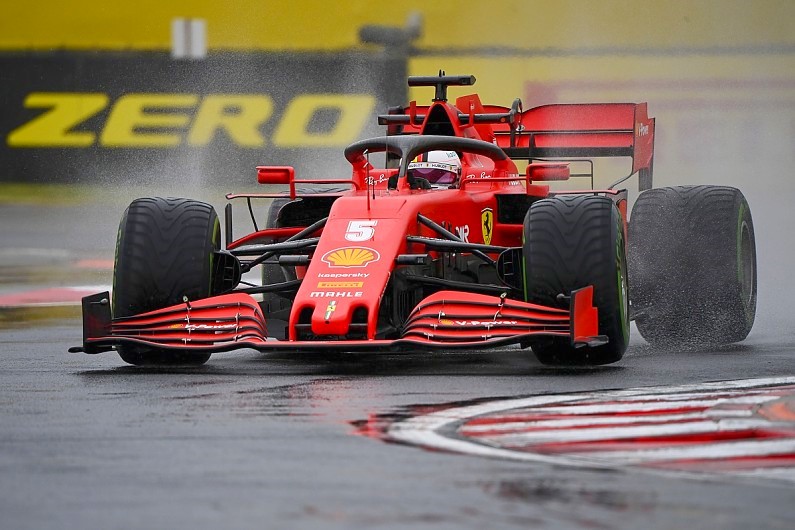 Ferrari's Sebastian Vettel turned the fastest lap in the very wet 2nd practice for the Hungarian GP, 0.272s ahead of the Mercedes of Valtteri Bottas.

In a session that saw 1/3 of the drivers not even put up a time, Vettel put up a lap of 1m40.464s, some 3.2 seconds faster than his Ferrari teammate Charles Leclerc who was 10th.

Of course in the dry the Ferrari is a slug but at least Vettel gave the Red team something to cheer about in what is going to be a very long season for the Tifosi.

The four-times world champion, whose future continued to be subject of much speculation heading into the weekend after being linked with an Aston Martin drive for 2021, hit the top of the timesheets with half an hour to go and at the time was 2-seconds quicker than anyone.

McLaren’s Carlos Sainz was third-quickest, 1.3s off the pace.

The Pink Mercedes duo had led the way for the majority of the first half of FP2 but slipped back to P4 and P5 in the order, with Lance Stroll outpacing teammate Sergio Perez by less than a tenth. While Perez has Stroll's measure in the dry, Stroll continues to beat his teammate in the wet.

Pierre Gasly finished the day sixth ahead of former Red Bull teammate Max Verstappen and the Haas of Romain Grosjean who is rumored to be replaced by Perez if Vettel takes Perez's seat in 2021.

Kimi Raikkonen completed the most amount of laps of any driver on his way to P9, after the Finn returned to action having sat out of FP1 for Alfa Romeo reserve and test driver Robert Kubica.