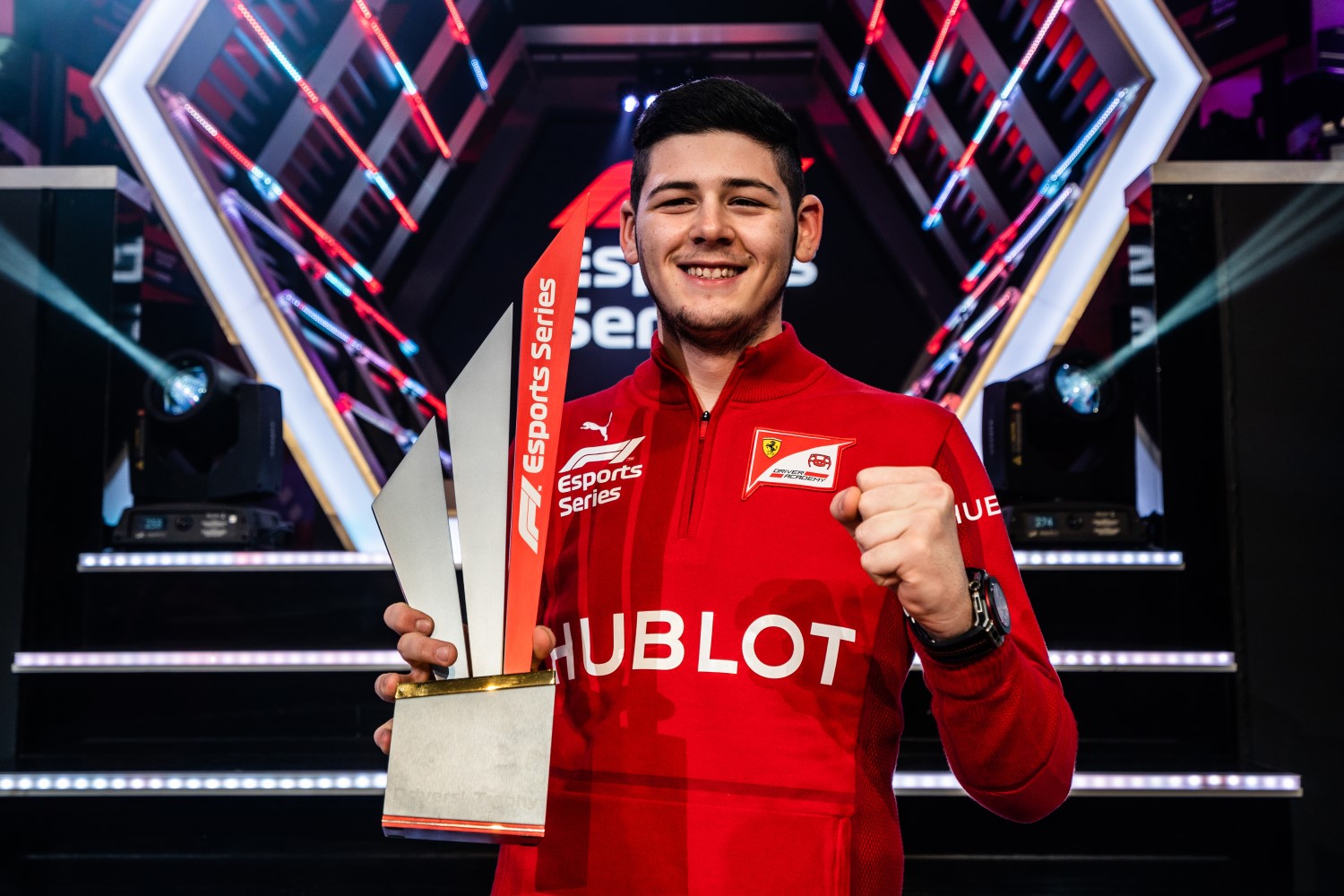 It looks like David Tonizza’s Christmas wishes came earlier than expected. The FDA Hublot Esports Team sim driver brought home a challenging, but special championship: F1 Esport Series. What a great achievement for the rookie driver on his first series’ appearance racing for the FDA Hublot Esports Team. The 17-year-old Italian, dubbed “Tonzilla" has achieved something extraordinary in the motorsport world. Not even the current world champion, Lewis Hamilton could match Tonizza, in fact Lewis Hamilton won his first championship in his second year of Formula 1.

Cold blooded. It was not all roses for the championship leader, the championship looked as if it could slip away from him. In the second race Tonizza got a three-second time penalty meaning that he ended the race in P6. His Red Bull rival, Frederick Rasmussen went into the final race as provisional championship leader. Tonizza’s determination and instructions from his coach Alessio Cicolari allowed him to regain his composure that allowed him to turn the table. This championship has brought great joy to the Ferrari family as they tasted for the very first time an Esport Championship.

Suzuka. The first race of the final round was held in Suzuka. A legendary track where David Tonizza started third behind Rasmussen and Carreton (Williams). The Dane got off to a flying start where the two drivers were pushing each other to the limits. On the other hand, Tonizza had to accept third place. Rasmussen’s win meant that he reduced the championship gap from 26 to 13 points.

Austin. The Circuit of the Americas was certainly not Tonizza’s best moment of the day. “Tonzilla" qualified in fourth position and he easily overtook Bereznay’s Alfa Romeo, furthermore Tonizza chased down and overtook Enzo Bonito’s McLaren who was second at the time. Tonizza decided to pit early, but he found himself 2.1 seconds behind Rasmussen. Bonito was catching up on Tonizza and he eventually overtook the FDA Hublot Esports Team driver. Tonizza received a three-second penalty for exceeding track limits which meant he was demoted from P3 to P6. This meant Rasmussen became the new championship leader.

In Interlagos. Tonizza needed to bring his ‘A Game’ to Interlagos, holder of the Brazilian Gran Prix, Tonizza did not disappoint. “Tonzilla" struck an amazing pole position, however, his race start was not perfect, but he felt more confident as the race progressed. Infact, Bereznay was able to overtake the Italian at the start. Tonizza knew that he had to solely concentrate on Rasmussen. The Dane decided to undercut his opponent, but Tonizza stayed out and concentrated on his race strategy. Tonizza was running in P1, therefore, his strategy worked to perfection. Towards the end of the race, Tonizza knew that the championship lead had to be managed correctly, therefore, he was very sensible and cautious on the wheel and by no means did he attempt a risky maneuver. Bereznay crossed the line first, but that does not matter to Tonizza since he became the new world champion.

The King. David Tonizza is really a great champion: “It was not easy being in front from the very first race of the season and suddenly you find yourself behind in the standings with one race to go. I have to admit I had to be cold and emotionless. Fortunately, I was able to regain my composure which I was missing. I want to thank everyone, especially, FDA Hublot Esports Team for their amazing work and the success we shared this year. I am very happy".

Red Bull sealed the teams' championship, scooping its share of the $500,000 prize.

The Alfa Romeo Racing F1 Esports Team cemented third place in the constructors’ championship and claimed the final win of the season as the New Balance F1 Esports Pro Series 2019 came to an end at London’s Gfinity Arena on Wednesday night.

Coming into the night with an outside chance of topping both the drivers’ and teams’ standings, the team performed admirably, with star Daniel Bereznay winning the season-ending race in Brazil and team-mate Salih Saltunc scoring in two of the three events of the evening. The resulting points allowed Alfa Romeo Racing F1 Esports Team to leapfrog Renault into third place in the Constructors’ standings, matching the result of the 2018 season, with Daniel finishing in P3 and Salih in P10 in the drivers’ standings.

Defending champions Mercedes finished down in eighth place and without a win.

Daniel Bereznay (P3 in the drivers’ standings): “I’m delighted with what we achieved this season. To take three race wins in such a competitive field is a fantastic achievement and I’ve got so much confidence in us to challenge for the title in 2020 after the difficulties we faced this year early on."

Salih Saltunc (P10 in the drivers’ standings): “I’m so proud with how we responded to adversity and fought back to secure third place in the Constructors. This team won’t give up and we have given it our all to clinch this position in the standings in the final race of the season."