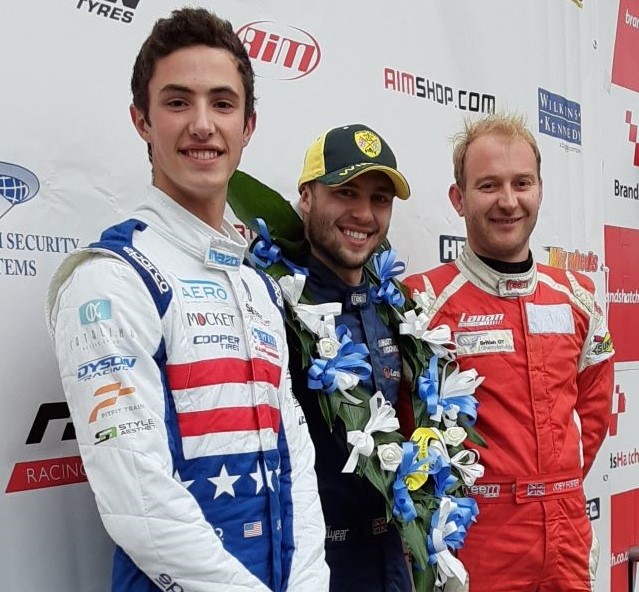 A total of 69 cars took part in qualifying this morning, separated into three Heat races, each of which was scheduled to be run over 15 laps.

Green was in action first, posting the fourth fastest time in his #21 Ray GR19 on a cool but dry 1.2-mile track for Heat One. After successfully completing his first-ever standing start and maintaining his position on a damp track, Green was quickly into his groove, slipping past former Scottish Formula Ford Champion Ciaran Haggerty (Graham Brunton Racing Ray) for third at the exit of the Druids hairpin on Lap 2.

By then polesitter and three-time Festival champion Joey Foster (Don Hardman Racing Firman) and fellow FF veteran Matthew Cowley (Team Dolan Van Diemen) – who had rocketed through from sixth on the grid – had already edged away to an appreciable lead. Cowley pulled off an exquisite maneuver at Paddock Hill Bend on Lap 4 to squeeze into the lead, leaving Foster to come under increasing pressure from 16-year-old Green, who hadn’t even attained his first birthday when Foster scored his first Formula Ford Festival triumph in 2003!

Green’s pace was inexorable, and even the guile of Foster was unable to keep the American from sneaking past into second place at Druids on Lap 6 (above). Cowley took the checkered flag a full 5.2 seconds clear of Green, although it was the American who held the honor of fastest race lap at 1:01.802, an average speed of 70.36 mph.

“It was quite the race," said a delighted Green. “We definitely had a really great pace. Cliff Dempsey just makes an awesome rain racing car. It was really good. Joey put up a pretty good fight and I tried to catch Matt but we were so on the limit of the track. It was so greasy out there. The car was all over the place. There were those sickening moments when you feel your stomach drop and the whole car is sliding and you are waiting to go off. It was pretty crazy but it was a lot of fun. I have to thank Team USA Scholarship and everyone who is behind it. Without them, none of this would be possible."

After Cliff Dempsey Racing teammate Jonathan Browne, from Ratoath, Ireland, had scored a narrow victory over Englishman Chris Middlehurst (Team Dolan Van Diemen) in Heat Two, Huffaker was next in action for Heat Three, held on a significantly wetter track.

A fine start initially saw Huffaker briefly jump from fifth place to third on the opening lap, but he struggled in the dire conditions and eventually slipped back to seventh at the finish. Two-time Festival winner Niall Murray scored a clear victory aboard his Team Dolan Van Diemen

“It’s frustrating that we went backwards but I learned a lot," said Huffaker. “I got a great start, moved up to third but fell back to fourth when Niall (Murray) went past. In the beginning, I struggled with the brake bias. The track was a lot wetter than qualifying and I lost another couple of positions working on that. Once the group in front got away, I just tried to settle in, play it safe passing lapped cars, find a rhythm and live to fight another day. I’m so grateful to Cliff and Matt, who is working on my car. Tomorrow, I’m looking forward to trying to make up some positions in the Semi, and try to get back into the top group."