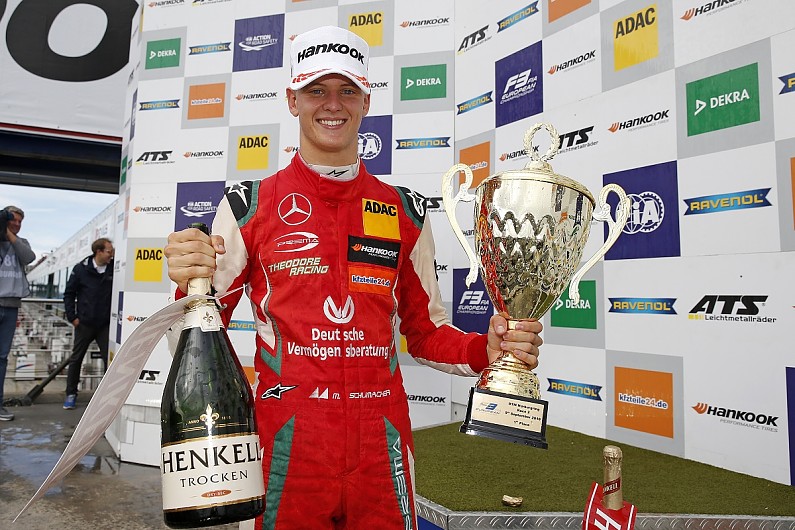 Mick Schumacher started the race from pole-position and managed to take the lead from Robert Shvartzman. Meanwhile, Daniel Ticktum had to admit defeat to Alex Palou in the duel for third place. Schumacher quickly pulled a gap of around two seconds to his teammate Shvartzman. The 19-year-old then extended his lead to 4.985 seconds at the finish and drove an undisputed victory home. Jean Todt handed over the winner’s trophy.

Shvartzman finished second behind Schumacher. For the Russian rookie driver, it was his third second place of the weekend. He is heading home from the Eifel as the leader in the rookie classification. For Palou, third place was his fifth podium finish of the season, his first year in the FIA Formula 3 European Championship. Ticktum, Marcus Armstrong (PREMA Theodore Racing), Juri Vips (Motopark), Sacha Fenestraz (Carlin), Ralf Aron (PREMA Theodore Racing), Enaam Ahmed (Hitech Bullfrog GP) and Guanyu Zhou (PREMA Theodore Racing) rounded out the top ten.

The thrilling battle for the FIA Formula 3 European Championship title goes into the next round at the Red Bull Ring in a fortnight.

Mick Schumacher (PREMA Theodore Racing): “This weekend was the best of my career in motor racing to date. My start for this race was okay, I was first going into the first corner and then was able to maintain the lead. Then, I tried to keep my advantage consistent. In the drivers’ standings, I am now closely behind Daniel Ticktum, but I am not looking at the standings in the championship too much. Now, I am focusing on the two final race weekends. With Spielberg and the Hockenheimring, they are taking place at two tracks that I like very much."

Robert Shvartzman (PREMA Theodore Racing): “My weekend was very good as well, better than I had expected. The team had already worked hard in preparation to ensure we have a fast car here. Compared to Mick, I was still lacking something, so he really has deserved the three wins. In this race, Alex was behind me, but I was able to keep him at bay. Keeping such an experienced driver like Alex behind me is never easy and I am glad that I have managed to do so."

Alex Palou (Hitech Bullfrog GP): “Being on the podium is always nice. This weekend, we have managed to improve from session to session, which makes me happy. Congrats to Mick who managed to win all three races here. Even though he has a great car, winning all three races during one weekend is never easy."